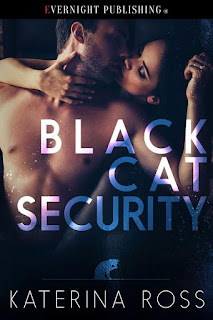 Hello Katerina!  Thank you so much for visiting Written Butterfly with me today!  It’s such a pleasure to chat with you.  So tell me…


Q) What gave you inspiration for your book?


Ida has a penchant for vintage-style things, so I was very much inspired by vintage pulp fiction covers featuring femmes fatale.


Q) Can you give us a fun or interesting fact about your book?


While I was writing Black Cat Security, I tried out a vintage perfume, something Ida would choose—a heavy, heady scent. I liked it a lot, but now that the story is finished, I can’t fathom why when I smell it—it’s vicious! Fortunately, it was just a small sample :)


I’m in the process of polishing the third part of The Sons of Gomorrah, and I also have a M/M/F story in mind. It will be set in my home country, , just like my first M/M novel Tenderly Wicked. 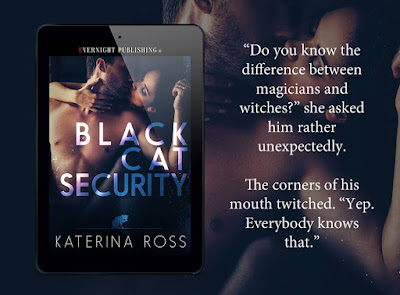 
Dragomir, a magician with PTSD and a very inconvenient curse upon him, struggles to make a living, taking part in illegal boxing matches. Fighting is the only thing he’s good at now. But how long can he keep it up? The fights are dangerous, and he’s untrained.


A pretty witch he meets one night says she might change his life for the better. Is she really willing to help, or does she have her own wicked plans about him? And can she succeed where all the magicians of Scholomance have failed? 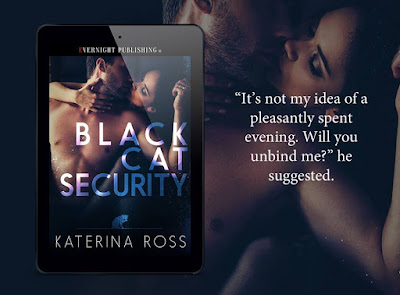 
When he came to, the first thing he understood: he couldn’t see. A moment of panic—and then another realization: there was a blindfold of some kind over his eyes. He was standing with his arms up above him … and wait, were his hands bound? What the hell? He tried to reach up, rotating his wrists, and clutched at the chains he was hanging from. Yes, fucking chains. And leather handcuffs, buckled very tight. And he couldn’t feel any clothes upon himself, just something around his neck in addition to his dog tag.


Then he remembered. Ida. Her apartment. Talking about his curse. She said they had to negotiate…


He jerked at the chains, hard. And again, and a few times more. They didn’t give. There was some slack, so at least his arms weren’t pulled up too tautly, but he couldn’t break free.


“You must be wondering what happened to you,” Ida said somewhere to his left.


“You agreed to an experiment, remember? And here you are. A fine specimen for a very interesting test.”


Her hand touched his chest lightly, out of nowhere, and he jolted at the contact as if she prodded him with a stun baton.


She chuckled quietly. “So skittish. But it’s understandable. Everyone would be jumpy in your place.” Her hand wandered across his pecs, brushed his nipple, and disappeared. “I’ll let you adjust. Try tugging at the chains again if you want to check whether they will break or not. I allow you. But here’s a spoiler: they won’t. It’s not some rusty old shackles. They are good and new, very sturdy, and secured to an eyehook in the ceiling. There had been a large chandelier hanging from it once, so it’s quite reliable. I redecorated the room long ago, but I always thought the hook would come in handy one day. It’s a mild nuisance the handcuffs have to be hanging so high—I’m not that tall. But a bit of hypnosis, and you helped me to restrain you most eagerly.”


What the hell was going on?


As if through a fog, Dragomir remembered saying yes to some kind of experiment and even filling and signing a yes/no negotiation form, but it was a vague memory, distant and dream-like. Everything else—a boxing match, a fight before that—seemed even more surreal.


Ida’s hand slipped along his flank, ticklishly, up to his neck, and tugged at what he realized was a collar.


“And this is to ensure you wouldn’t break free using magic. Quite a special thing. Leather, silver, and a security spell. Meant especially for wayward mages, something of the kind they use in prisons when incarcerating a person with enhanced abilities.” She slipped a finger under the band around his throat, making it too tight, almost choking him. “So you will behave, no matter whether you want it or not. A bad boy will be a good boy for a change.”


“What are you doing?” he rasped out.


“Just making you harmless. Wasn’t it what you wanted, to cause no harm to me?”


Was she mocking him?


He stood there, wearing nothing but a collar, a dog tag, and a blindfold. It was ridiculous. Laughable. Humiliating.


Rationally, he knew he probably had nothing to worry about. Or did he? But anyway, all rational thoughts gave way to a primitive bodily reaction—discomfort at being tied up, helpless. It felt like he was itching all over under his skin with uneasiness bordering on unwanted panic, too exposed, deprived of sight. He tried to wriggle his wrists out of the handcuffs instead of jerking at the chains, but to no avail.


“Nope, the handcuffs will hold, too,” Ida warned him. “I checked, and not just once. As I might have said, I do a bit of coaching now and then, but of an unusual kind. I call it expanding boundaries. Experiencing new sensations. It doesn’t normally include sex, but for you, I might make an exception.”


A peck of a kiss between his shoulder blades. Hands running up and down his sides, in a comforting manner, but at the same time, it was unnerving. He tried to twist away from her touch, stubbornly, but she squeezed his hips, adding a hint of nails.


“Sshh, don’t twitch, hold still,” she said, “or I’ll pull up the chains. They say it’s extremely painful to hang from your wrists. Excruciating.”


“Oh yeah?” he managed. “Someone else complained?”


“And very loudly. Good thing this room is soundproof. As I said, it had been redecorated.”


Her arms went ‘round him. She was still clothed, but he could feel her little perky breasts pressing against his back. His cock, already half-hard, immediately went into a very interested mode. It didn’t seem to mind the strangeness of the situation.