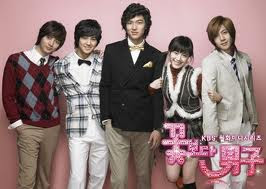 So this isn't exactly a movie, but the show is so good that I just had to blog about it! I am a sucker for Asian romantic dramas. So I recently was able to see a 26 episode Korean series called “Boys Before Flowers”, based on a Japanese Manga, on Hulu.com. There have actually been a Japanese and a Taiwanese version of the same story...and yes, I've seen them too. And while those shows had their own charm, I really liked the actors attached to this version. They really seemed to fit their parts.

With superb sets, great acting, and lots of eye candy, this show was like chocolate cake for me!

The first episode starts with a girl, of course. When delivering a Shinhwa student's dry cleaning, Jan Di saves the life of her customer from committing suicide, who was a heavily bullied student at the most prestigious school in , . Her actions soon became public and exposed the harsh bullying within the school, therefore enraging the public. To end the outrage of the public, Jan Di is offered a swimming scholarship to which she declines but her family forces her to attend.

During her first day at Shinhwa, Jan Di learns of the famous F4 and of the other students' adoration and fixation of/on the boys in the group. Gu Jun Pyo, Yoon Ji Hoo, So Yi Jeong, and Song Woo Bin are the richest and most powerful kids within Shinhwa and . Subsequently, they use their power to terrorize the weaker students or those they do not like. Jan Di, instead of being impressed, becomes enraged and fantasizes about confronting Gu Jun Pyo, the leader and initiator of many of the bullying acts. She gains courage to confront him when a friend accidentally drops ice cream on his shoes and he demands her to lick it off. Jan Di defends her friend and attempts to reason with Jun Pyo's tyrannical demand. He refuses to relent and demands her to lick it herself. Feigning licking it, she bends down but shoves her own ice cream in his face. Enraged by this, Gu Jun Pyo declares war on Jan Di and encourages the other students to bully her, by putting a Red Card in her locker. Jan Di however, is resistant, refusing to apologize to Gu Jun Pyo, and stands by her decision to fight him.

Through the episodes, Gu Jun Pyo falls in love with Jan Di, and thus their rocky romance begins as he and his friends transform from spoilt rich boys into men with hearts. Hulu.com provides the English subtitle translation and the show is easy enough to watch on laptop or computer. It’s lighthearted, fun, and overly dramatic at times, making it the perfect desert.