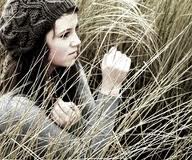 
"Dare," he said before she could even ask.
"Okay, the same," she said. "I dare you to do the same as Cassidy."
"I can do it better than Cass," Garrett replied, and she thought she heard a touch of boasting in his voice.
Cassidy raised an eyebrow, but waited.
Garrett stood up, hooked the back of one boot with the front of the other, and it came off cleanly. After he took off the other, he placed both behind him. As he removed his socks, he bent a little to place them on top of his boots, his ass prominent in Scharlie's line of view.
As she looked away, she caught Cassidy smirking at her.
When Garrett got settled again, they all flipped over cards, and this time, Scharlie lost, while Cassidy won.
"Dare," she said before he asked, and reached for her shoes.
"I dare you to remove your underclothes."
Her right lace-up boot fell from her suddenly numb hand with a thump. Her mouth formed a little O.
"E–Excuse me?" she stammered.
"Your pantalets. I dare you to remove them."
"Not my shoes?"
Cassidy shook his head. "You can't refuse a dare, Scharlie. This is a game of trust."
She looked helplessly toward Garrett, but got no help from him as he just stared at her challengingly. Should she believe him? Could she do as he asked?
-by Beth D. Carter
www.bethdcarter.com
http://www.bookstrand.com/lawless-hearts
Posted by Beth D. Carter at 12:13 PM