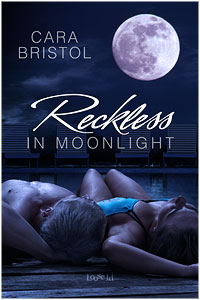 If a woman is only a few years older than the man she's dating, that passes muster. But as the age gap widens, eyebrows rise and people begin to whisper, “cougar,” the somewhat derogatory name for a woman who deliberately targets much younger men.


Reckless in Moonlight Blurb:
Forty-five-year-old Dana Markus knows a full moon makes people act crazy. It's why they call the power company with stories about aliens disrupting the earth's climate. It probably explains why her ex-husband left her for a girl scarcely older than their college-age daughter. It definitely accounts for why she impulsively invited the neighbor's hunk of a son over for a skinny-dip. And why 28-year-old Lon Corbin accepted.
Lon doesn't think much of the mass of rock orbiting the earth, but he does think he's the luckiest man alive when the sexy divorcee he's admired from afar invites him into her pool. He knows she has reservations about their age difference, but he's planning to show her in a very physical way how good they could be together if she'll give him the chance.
But when their simmering private passion boils over into a public relationship, family pressures and schemes threaten to split the couple apart.
The moon brought them together --  but will it save them?


Reckless in Moonlight Excerpt:
Back and forth, back and forth, Lon Corbin ran the sea sponge over the hood of his car. If it seemed odd that someone would wash his vehicle at night, well, the moon was full, and no one knew better than Dana Markus that moonlight compelled people to do strange things. Why else was she ogling the neighbors' twenty-something son like he was a strawberry dipped in Godiva chocolate?

And Lon offered so much to enjoy. A tiny moan of appreciation escaped her lips. From the top of his head, covered by thick amber hair, to his bare tippy toes, his majestic, youthful body inspired her to stand and salute. Strong, broad shoulders and a smooth chest decorated by lickable flat nipples tapered to slim hips and powerful thighs that were hugged by faded blue jeans. His legs weren't the only impressive body parts the fabric molded; the heavy denim cupped a massive bulge further showcased by the wetness of the fabric.

He'd soaked himself clean through with the hose. Water droplets sluiced down his arms, his chest, his flat abdomen…and led the way to his thick sex.

Lon dipped the sponge into the bucket again, then swirled it over the hood, round and round, making circles to ensure he got every spot. Every one. Dana admired a conscientious man who paid attention to detail, who took pride in a job well done.

He dipped again. Oops. He splashed himself with the soapy water. Dana licked her lips as her gaze followed the bubbles' journey over his chest and down his ripped abdomen, where they soaked into the waistband of his low-slung jeans.

Oh, to be those bubbles!

Another moan, louder this time, erupted from her throat and drew Lon's attention. Their eyes met across their adjacent driveways, and he flashed an all-American, 100 percent sexy grin.

“Hot, isn't it?” His low voice vibrated like distant thunder, and Dana knew he wasn't talking about the air temperature but rather the sexual tension that snapped and sizzled like a lightning strike between them. She almost could smell the ozone.

“Scorching,” she agreed. “Can I give you a hand with that?” She eyed the dripping sponge he held in his large hands.

“I was hoping you'd ask,” he said, with a grin. His ready acceptance of assistance lit a fire in her stomach. For months she'd watched Lon from afar, never exchanging more than a polite hello, never imagining she'd have a chance at anything more than a greeting. Dana glided across the driveway, tugged by the seductive promise of
Lon's gaze as if she were tethered to him, and he was reeling her in. Every step heightened her arousal. Her breasts felt heavy, her nipples tightened, and between her cream-slickened thighs, her swollen cunt pulsed hungrily.

Standing next to him, she could smell the detergent in the bucket and a manly, soapy scent that emanated from him, along with the even sexier aroma of clean sweat.

“Do you have another sponge?” she asked as she scanned the dark street for activity. No traffic. No late-night dog walkers. Perfect.

“You don't need one.” Lon tossed his into the pail and propped his sexy ass against the car's fender.

“No?” She ran a finger over his chest and circled the nipple. It perked under her touch. A sharp current of desire zinged through her clit. “What do I need?”

“You need cock,” Lon said and unzipped his pants.