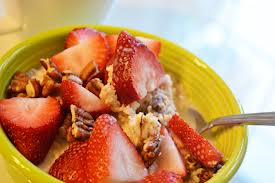 My battle this weekend with the "diet" didn't go so well.  I was on the road and traveling always puts you in a difficult situation when you need to eat and want to eat cheaply.  But, though I may have lost the battle I intend to win the war.  One of the things that I struggle with is what the heck to eat for breakfast.  For years my go to breakfast has been cereal.  As a kid I ate the sugary stuff and in fact, my mom would add sugar to my cereal to make it sweet enough for me to drink!  Wow, the times have changed.  I like cereals like Chex and know that high fiber cereals are better than no breakfast at all, but what is the best thing to eat in the mornings?

Nutritionists have long stated the benefits of a well rounded breakfast to help break the mindless nibbling through the day which can add needless calories and sets up a big F for failure.  According to WebMD's site:

"A group of researchers analyzed data from a government-funded study that followed more than 2,000 young girls from ages 9 to 19. They found that regular cereal eaters had fewer weight problems than infrequent cereal eaters. Those who ate cereal occasionally had a 13% higher risk of being overweight compared to the regular cereal eaters.

So today I got up and cooked myself an egg in Smart Sense Omega enriched butter substitute.  I got out a slice of whole wheat bread, put a slice of lacy Swiss cheese on it and slid the fried egg onto it.  I also made a cup of Empower-Mint Yerba Matte tea.  Unfortunately, eating an egg with cheese is the only way I can eat them.  I don't like eggs that much but I know they pack a high protein punch.

So I decided to look at other options for breakfast.  Basically, I'm looking for energy density foods, foods that punch a lot of energy and fiber with small amount of calories.  These foods are fruits, vegetables, and whole grains.  So this is the breakfast I found:

This equals about 307 calories.

Or another option is:

This breakfast has about 450 calories total. That's almost equal to the standard bagel-and-cream-cheese breakfast - yet it's much more food, and much lower in fat.

Foods that are the best to eat are high fiber foods.  But be careful first starting out.  Don't overdo it if you're not used to it, because too much fiber can cause constipation, diarrhea, or an upset stomach.

Here are some quick breakfast ideas:
Sadly, it's the calorie equivalent of five slices of bread so as good as they taste your diet would love it if you skipped it.  If your on the run and have to do fast food, believe it or not, eat an Egg McMuffin!