Veil of Scars by J.R. Gray 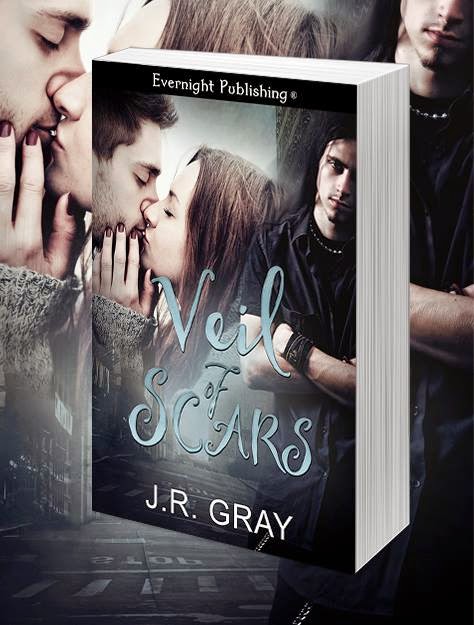 Hello, thank you so much for having me!

This story is in first person, from the prospective of Steve, and he came to me when I was dealing with some rough feelings myself. I used all the negative energy and put them into the character to kind of get them off my chest. The rest of the story fell into place around what Steve was feeling.

I try to write every morning and I drink lots of tea. If I really need to get something out I go sit at Starbucks where they know me by name.

No this is my first stand alone.

As I said before I put a lot of real life feelings into this one. I always take what I’m feeling and channel it into my books. It’s cheaper than therapy!

I would love to work with Tiffany Reisz because I love the way she writes damaged characters. I’m always drawn to characters in pain.

My next project will be the forth book in my bestselling Bound series. I’m really looking forward to sharing that with the fans. I also have a m/f Sci-fi in the works as well as a contemporary m/m piece involving a cop and a prostitute.

Thank you so much for having me on your blog! 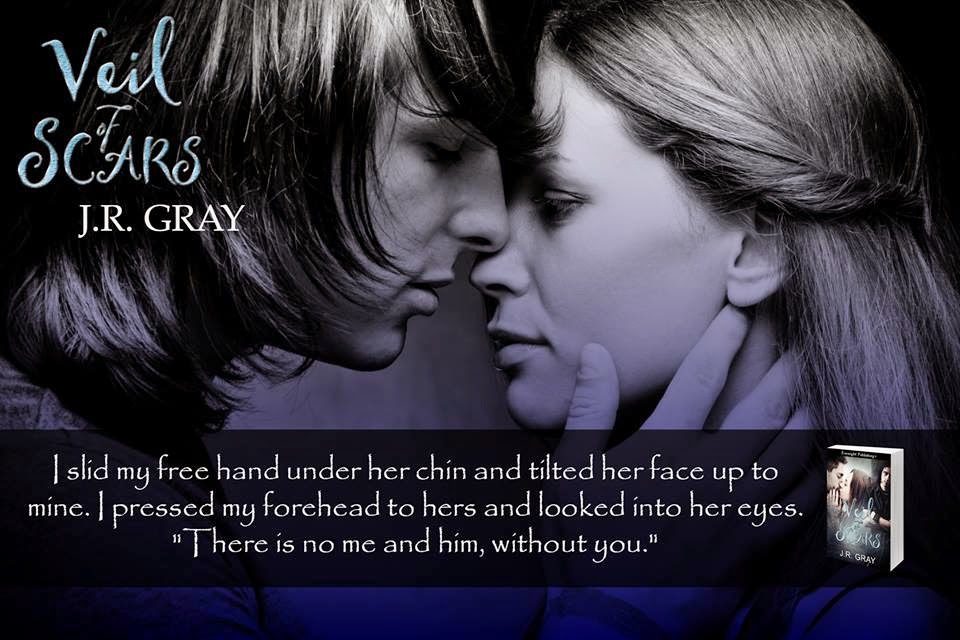 A little bit about Veil of Scars:

Steven is tall, dark and damaged. He doesn't let anyone close, comfortable on the outside of normal life where he can hide his scars behind a wall so high that nothing gets through…except them. Despite a childhood marred with black and blue, he's survived and moved in with his two best friends, Sam and Charlie.

Life should get better, but it was Sam who held him when the dark threatened to swallow him whole, Sam who gave him a place that felt like home, and Sam who knew every scar and every broken place.

And it's all been taken away with Charlie sharing Sam's bed.

Without his former confront, Steven realizes what's been hiding in the deep corners of his heart, and the truth sinks him like a weight. He’s in love with one or maybe both of his roommates. Navigating unrequited love tears Steven apart and brings him to the precipice, and he has to choose: his feelings or Sam’s…and Charlie’s?

Here is a sneak peek from Veil of Scars:

Soon the music was going and party-goers were milling about in the low lights. There were drinks and bodies on every surface. I stood behind the bar, not minding making drinks for the guests since there was little else at the party that I wanted to do. The atmosphere mellowed as the liquor took effect, and Sam had long stopped trying to drag me out to dance. Instead, he’d taken up a spot on the couch with Char. Their mouths met, skin and lips, while their hands wandered, stroking and skimming over each other’s clothes as the party moved around them. I sat back, finding I was no longer needed as everyone was sated. The few remaining people had paired off in couples for the night, strewn over the furniture and floor. The base thumped, and bodies moved with it as if the alcohol had turned them into living recreations of the music. The door to Char and Sam's room slammed shut, closing off a guy and two adventurous women.
Sam’s head snapped back at the sound, and he cursed under his breath. He glanced around then whispered to Char. She giggled and grabbed a throw off the back of the couch.
An outsider where I sat, I seemed to have escaped notice as the only fairly sober party in the room.
She pulled the blanket over herself and then moved the thin fabric over his lap. Soon Sam’s head flopped back into the cushion, and his mouth fell open in a soundless moan. Charlie's eyes blazed with mischief, and she grew more eager with every reaction from her boyfriend. His hand slid up her shoulder, curling around the back of her neck. My skin burned in the same place, a physical memory of the times he’d touched me the same way.
He dragged his head off the back of the sofa and looked at her, his blue gaze pleading louder than any words could. The air buzzed with electricity from the pair of them. He licked over his lips, and the muscles in his arm tightened as he guided her head towards his lap. Charlie ducked under the blanket, and a flash of heat ran through me.
Was she really going to go down on him in the middle of the party?
I held my breath, transfixed as Sam lifted up his ass below where the blanket covered him to slide his pants down around his ankles, I guessed. He groaned, this time audibly, and the sound went right to my gut. I chewed on my lip ring unable to stop myself from staring. Charlie's head bobbed under the cover, and Sam's eyes rolled back in his head.
Suddenly I was flushed and embarrassed. I was the voyeur, spying on my friends who were caught up in drunken passion. I tore my eyes away from his lap only to find his blue gaze locked on me.

About J.R. Gray
When not staying up all night writing, J.R Gray can be found basking in the warm glow of the Miami sun, or at the gym where it's half assumed Gray is a permanent resident. A dominant, pilot, and sword fighting enthusiast, Gray finds it hard to be in the passenger seat of any car. Gray frequently interrupts real life, including normal sleep patterns, to jot down nonsense. The bane of Gray's existence are commas, and even though it's been fully acknowledged they are necessary, they continue to baffle and bewilder.
If Gray wasn't writing...well, that's not possible. The build up of untold stories would haunt Gray into an early grave or possibly a mental institution where the tales would end up on the walls in crayon and finger paint.