Ravenna Tate Returns with The Weathermen 3! 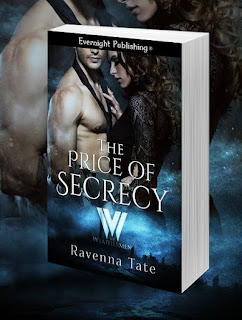 Thank you for having me here today! J

I’ve always been fascinated with the Mafia. It’s rumored my maternal grandfather was part of them, but I have no concrete proof of that. Still, I am Sicilian, so it’s possible they are part of my ancestry. THE PRICE OF SECRECY is set over 100 years in the future, but that doesn’t mean organized crime can’t still exist, or in this case have enjoyed a resurgence during the chaos before everyone was forced to move underground in order to survive. So I thought it would be interesting to have both my hero and heroine hiding from the same crime family, but for very different reasons. Neither one can let the other know about their secret, but of course it has to come out at some point.

This is a futuristic world in which both organized crime and WITSEC still exist.

Not really. I sneak in my writing when and where I can. I’d be writing all the time if I could.

Plenty of real life experiences make it into my books, at least in part. Sometimes I’m influenced by things I’ve seen on TV or in a movie, or have read in a book. Most of it I simply make up.

ONE NAUGHTY FANTASY is under contract with Evernight Publishing. This is part of their Romance On The Go Line and features the same three characters as in my book SNOWBOUND – Nina, Cameron, and Alex.

I’ve submitted The Weathermen 5 – A SLOW-BURNING DANCE, and I’m writing a third book with Nina, Cameron, and Alex that I hope to submit to Evernight within a few days.

THE PRICE OF SECRECY -
The Weathermen 3

Angela Davidson lands her dream job with Greco Communications, but quickly learns her new boss, the enigmatic Dominic Greco, has a dark secret he works hard to conceal. Angela understands secrets because she’s been hiding one of her own for sixteen years and if it’s discovered, she will end up dead.

Dominic is part of a group of friends financing the efforts to put a stop to The Madeline Project. The program now has a mind of its own, thanks to a virus called Tommy Twister. These men have power, resources, and money, but they’re as ruthless and possessive as the storms ravaging Earth.

Angela moaned loudly into Dominic’s open mouth as his tongue parted her lips. Holy fuck this man can kiss! Her pussy was soaked, and every inch of her skin ached to touch him. She forgot where they were and pushed closer to his warm, hard body, going so far as to rub her abdomen across his erection. Holy shit. This was nothing like she’d imagined it would be, and she didn’t care if he was her brand new boss, or that they’d just had a two and a half hour lunch. She wanted to be horizontal with him in the worst fucking way.

She’d even take semi-upright. She’d bend over this table and lift her skirt if that’s what he wanted. Fuck it all. It had been way, way too long since she’d been kissed and held, and no man had ever moved his lips and tongue over hers like he was doing now. She wanted more. So much more.

When he released her mouth, she stared at him until he finally picked up her purse and handed it to her. Then he took her hand, and she simply walked, letting him lead the way. Her legs felt like jelly. His hand was so warm it made her entire body hot. She could only imagine what the rest of his skin would feel like next to hers.

They said nothing on the walk back, but she felt the lust and heat coming off him in waves. Inside the elevator, they were alone, and this was the same private elevator she’d taken before her interview. He keyed in a code, and then the floor she now worked on. It wouldn’t stop for anyone else. They had it all to themselves.

He turned toward her, and then he cupped her face and stared into her eyes with so much intensity she thought her heart would stop. “This is madness,” he whispered. “But I can’t stop.”
She didn’t have a chance to ask him what his cryptic comment about this being madness meant because he pushed her up against the wall of the car and kissed her like he might never do so again. She reached for his hair, and he caught her wrists, pinning her arms overhead. The gesture was so damn sexy and dominant that she nearly came. He moved closer to her, grinding his bulge against her body until she was so damn wet she knew she’d need to change her panties.