Suffragettes: The Real Heroes for Women

Mostly on my blog I feature books.  New releases, cover reveals, interviews…I try to host everything there is about writing and make no references of a political or religious nature. But there is one thing that is dear to my heart, and that is women’s rights.

Let me clarify one thing...I'm not a feminist. Far from it. But it makes me so angry when I see men trying to take away certain aspects of women's rights, or even women letting men rule their decisions without a clear thought of what it means to them. Honestly, if a man told you that you're not smart enough to vote, or understand the issues being debated on, or you aren't capable of handling money…that your only hope in life is to marry well…or that you need to be nothing but a baby maker...would you agree with him?  No, of course not. That's stupid. 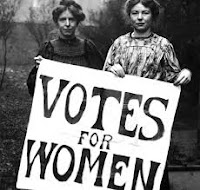 There is a movie coming out called “Suffragette”, staring Meryl Streep, Helena Bonham Carter, and Carey Mulligan.  And it’s about fucking time to remind this generation what our Foremothers did for us.  What they sacrificed and suffered to give us everything so we, their descendants, could have freedoms they only dreamed about.  I wonder how many women know what the word Suffragette means?

For those who haven't read the history of our Foremothers, the march for women's rights is a fascinating piece of history we should not forget.  It wasn't just this nation but in many of the democratic "civilized" places in the world.  It's sad that women suppression still happens in our world today.

So in the United States, women began fighting for their right to vote in the 1800s.  Susan B. Anthony was even arrested for voting in the presidential election of 1872.  Back in 1919 the word Suffragette meant a movement, a firestorm. Who else knows their history, and the fact that women didn't get the right to vote until the 19th Amendment was ratified in 1920? That's LESS than 100 years ago! The car is older than our right to vote. 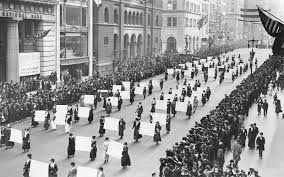 Suffragettes marched, were bullied, thrown in jail, abused, and scorned by many...some by other women, mostly by men.  You see, a woman’s place was behind her husband.  She had no rights.  She was a daughter, a wife, or labeled a spinster. 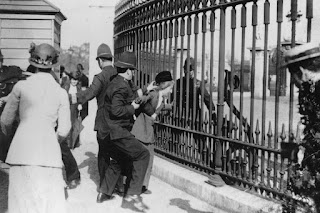 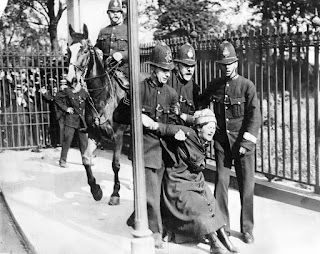 But that's what Suffragettes were fighting for. A world were women were considered equal. Pictures are worth a thousand words. 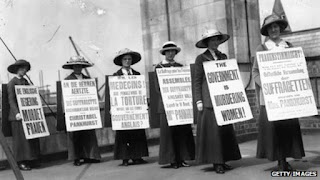 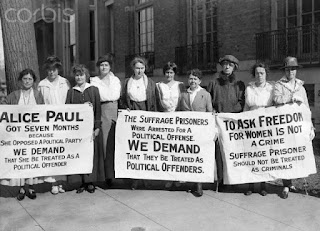 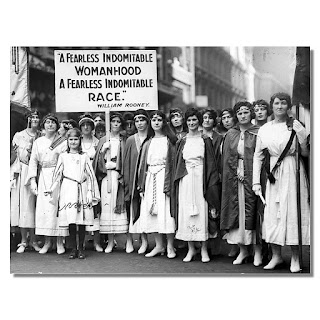 Nothing burns me up more than a man's belief that he has any say so over what it means to be a woman.  The issue is as pressing today as it was almost a hundred years ago.  We've come so far but clearly, there are still mountains to climb.  I wonder if I would have had the courage to march for my rights, like the women in these photos.  I hope that I would.  We must never forget what they sacrificed for women in this country.  For us to burn our bras, to take a stand.  To be the breadwinner, or at least have the choice to be the breadwinner.  It is a privilege to vote, so take advantage of the fact that we have that liberty thanks to our Foremothers.