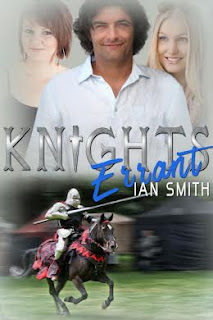 Hello, Ian!  Thank you so much for visiting Written Butterfly with me today!

There’s a lot about my story creation I don’t understand. I rather enjoy the way the stories and people appear in my mind. In this story, I wanted to make the two women into different characters, so described my brief “backstories” for them in a Facebook writing group and asked for comments, and I was offered some great ideas. I’ll be developing this more fully in book 2.

It is! The series is called “Merely Players”, and I credit Shakespeare in the first book. In book 1, Paul is recruited to work on a TV show. In book 2, he works on the show. The other ideas I have all involve the other TV shows they all work on, with tension and drama coming from various sources. I have different story ideas for books 3 to 6. And I’d love to have a spin-off series of three stories from two of the supporting cast in book 2. I’ve already written most of their story and needed to have Paul as one of their friends, so it made sense to have them as his in the Merely Players series. Well, it made sense at the time...

It’s also an example of how research can be fun. I’ve seen a couple of jousting teams do displays and even spent a day learning the basics with one, who train stunt performers as well as run corporate entertainment and “special treat” days.

My original idea was a short story of maybe 15,000 words. In my 200-word story, the characters were working on the show and in a relationship, so I needed some backstory. I remembered the jousting, developed the supporting cast, had an idea for giving Paul a significant moment of doubt and anxiety and the story seemed to flow along.

No, quite the opposite. I’m forever rolling ideas around in my mind and have to concentrate on other things sometimes. Like my day job.

As much as I think the story needs. I obviously write about loads of things I’ll never experience, but some stuff seems to work better if I know how it feels.

I ride horses, so I can briefly describe the sensations to provide “colour” and help my readers imagine the experience.

For one story idea, I wanted a character to use a traditional English longbow, so I found a local archery centre doing “taster days” and went along. And took it up as a new hobby.

At my archery club, one of the members is a military doctor, which gives me an expert to ask about medical stuff. I’ll never sew up a wound, but I know someone who has, and I can ask them about it!

Book 2 is already well on the way and I want that published next. I’m uncertain what to do after that, as I have four different ideas, but I’m not going to stop now I’ve got the bug!

I'm a professional scientist by day, madcap writer in my spare time. I’ve lived in various parts of England, and am now settled in Cornwall, in the south-west of England. Not far from Poldark country...

My education was obviously science-based, but I've always been a keen reader - thrillers, science fiction, fantasy, horror, a few classics, and even some romances.

Scientific papers and technical reports are interesting to write, but one day I knew they weren’t what I wanted to do. I started writing general interest factual articles and giving public talks. Then I decided to try fiction and joined a constructive critiquing group, whose feedback convinced me to stick at it. My confidence was boosted by having four short stories published in anthologies. Now I’ve gone and written a whole book, I want to write another.

Lonely widower Paul knows he's ready to move on and start a new relationship, but doesn't expect to meet two attractive and interesting women at the same time. They want to recruit his jousting display team to feature in a TV show.

Becky and Hayley are best friends, as different as chalk and cheese, and both clearly fancy Paul. A decent guy at heart, he hopes to win one without harming their friendship. But the women don't make it any easier when they turn up the heat and leave him wondering what's going on.

A fantastic prize is within his reach. He just has to overcome his deepest fears, self-doubts, and fragile self-confidence. And be Hayley's leading man in the TV show she hopes will make her name. So no pressure. Just take a deep breath and let these two intriguing women lead him way outside his comfort zone.