Beth and Bryce's Totally True Info on Food and Stuff, For Reals! 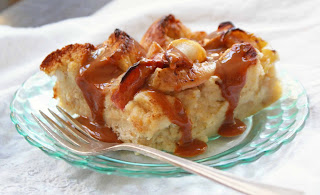 Ever wonder about bread pudding?  Yeah, neither have I.  And this blog post won't be sharing any secrets, except for maybe those who live in Vermont.  In any case, enjoy!

Bryce: Bread pudding is a type of casserole.

Beth: I disagree.  Casseroles must have a vegetable in them.  Bread pudding -if made correctly and without raisins...BLEH on raisins- has nothing but gooey sugary fat goodness in it.

Bryce: Au contraire! Clarence Bloomington Casserole III, inventor of the casserole said, "Casserole may be veg or meat, savory or sweet. Chief among it's possibilities, it must be bland to eat."

Beth: Well, that disqualifies bread pudding. It's not bland to eat. Unless made by a person with no taste buds.

Bryce: Oh, it's the blandest. That's why they dump a minimum of a gallon of Bourbon over each one. After a couple of bites, you forget how fucking bland it is. I can't believe how you've danced past the best and most obvious fact to support your argument.

Beth: That it's pudding?

Bryce: Right there in the title!

Bryce: Good game, you played well, you came with spirit but I'm afraid we cannot award you any points for that round.

Beth: Why the hell not?

Bryce: You could have gained some style points if you'd actually named a specific Bourbon. Your position on raisins was vague, at best.

Beth: I'll specifically plant my foot in your ass. Bleh on raisins, I say again!

Bryce: And you completely ignored the existence of cauliflower bread pudding so popular in Vermont and Sri Lanka. Arguing with the judges isn't helping your case much, either.

Beth: Ick. That's worse than raisins. But I highly doubt the Vermontians and Sri Lankans are that tasetebudless

Bryce: You dismissed the primary source material, typically considered the best evidence in any argument in an historical discussion.

Bryce: No. If you scroll up you can see it typed out. In words. On the Internet. Therefore it's a totally true fact of truthness!

Beth: So if I type you're an idiot that makes it true?

Bryce: ...and hurtful. Why you gotta be that way? Would it help if I made you a bread casserole?