A New Release by E.D. Parr 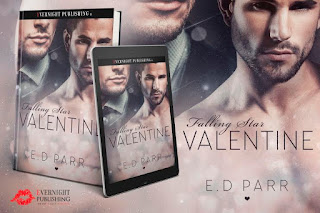 Thank you so much for visiting Written Butterfly with me today. It’s such a pleasure to chat with you. So tell me…

The story ‘Falling Star Valentine’ was inspired by shooting stars. We all know shooting stars are falling meteorites, but the romance remains when one streaks across the midnight blue sky, and when two, in close succession, zoom over the night vista as you stand on your hotel balcony, it’s a sight to behold. I travel a little with my day job and in the autumn of 2016, I had to travel a lot more than usual. One night when I couldn’t sleep because I was churning worries around, I went out onto the balcony of the hotel room I was staying in and stared up at the sky. The night sparkled cold and the sky displayed an array of stars suddenly seeming only meters away a shooting star flew across my line of vision, then another as if it followed the first.
I’m a die-hard romantic and immediately my sweet but sexy character, Valentine Steel, had formed in my head. He’s Falling Star Valentine on his way to visit earth. Will he find love?

I usually know my characters immediately. They give me the story. I know what they will do and the way they will do it. I can hear their voices as I write. I’ve always been lucky enough to have the whole package, idea, characters, and story details appear in my mind.
The only thing I have a problem with is their name. There the character is nameless, and until I find a name that suits the character, I can’t write the story. Funny huh? It was easy with Falling Star Valentine because Valentine Steel whispered his name along with his story at the outset—not so with my next project, ‘The Night Gardener.’

‘The Night Gardener’, will be published by Evernight Publishing in April. It’s a spooky MM love story, not quite PNR in that there are no shifters, vampires etc., but it is paranormal in that one of the heroes is a spirit or wandering soul. It took me ages to give my guys names. They stood around waiting for days and then suddenly, Zachary’s name came to me and Dane’s followed. I have to know both Christian and surname or nothing will work, (Smiles)
Here’s the blurb:

Architect, Dane Lovell takes an off-season vacation in an old New England mansion, hoping to ease his broken heart, and spark his imagination. Impressed by the pretty gardens, he’s surprised by the sinister atmosphere of the river than winds through the estate. Dane settles down to his vacation and tries to immerse himself in his drawings. One night, the sound of the back door smashing open in the wind and rain shocks Dane from his work.

Spooky, gorgeous, and enigmatic Zachary Yarrow has brought logs for the fire. He’s the estate gardener and brings with him not just passion and a love affair for Dane, but a strange, spine-tingling mystery.

Who is Zachary, and what will happen when Dane finds out?

I’m also writing an MM romance titled Given Time, a contemporary love story with some paranormal twists. I’m about seven thousand words into that story but need to focus on ‘Falling Star Valentine’ for a couple of weeks since we’re in Valentine’s month.

Thank you for inviting me to your blog.

Fashion photographer Dale Walker takes a train to his hometown, relocating there after nursing a broken heart for six months in another city. His train makes an unscheduled stop to take on a mysterious passenger.

For a long time, Valentine Steel has hoped to meet a man who will love him. When he sees Dale on the train, he’s overjoyed to find a vacant seat beside Dale.

Dale’s immediate attraction to Valentine has him on edge. He doesn’t want another broken heart, and yet Valentine is so magnetic Dale’s frozen heart begins to thaw.

Valentine sets out to charm and capture Dale in his sparkling aura. He can’t let the chance to have Dale’s love slip away. This could be his last chance to stay on Earth the planet he loves.

Read an excerpt
A soft sound of regret that he’d given his heart away so easily escaped Dale and then the sudden slowing of the train grabbed his attention. Thrown a little forward by the rapid decrease in speed, Dale huddled back in his seat. No one sat beside him and the magazine he’d placed on the adjacent seat flew off forcefully as the train ground to a halt.

People stood and gaped out of the windows. Dale peered out at the white expanse sparkling in the morning sun, unaware until then that the train had even traveled into snow-covered country. The hum of concerned questions filled the carriage as people looked around and talked in hushed voices. There’d been no collision, no terrible sound of an accident and Dale, in the fog of his misery, waited quietly for some indication of what was going on.

An announcement floated from the practically invisible speaker at the front of the carriage. A pretty sound chimed and a soothing voice stated the obvious before giving information.

“Translines Rail has made an unscheduled stop. We apologize for the inconvenience. There is no need for alarm. We will shortly be mobile again when a passenger has boarded. Thank you and enjoy the rest of your journey.”

Dale bent to pick up the magazine that had fallen to the floor of the carriage. He hadn’t even placed a fingertip on the glossy cover when a hand extending from the cuff of a black jacket sleeve took hold of the magazine, and lifted it.

Dale swiftly looked sideways to see who the hand belonged to, and came face-to-face with a gorgeous man. Something about the man made Dale’s heart lurch, which scared him, and because of the scare his heartbeat increased. He closed his eyes for a few seconds, trying to calm this sudden flare of nerves. He gave up on retrieving his reading material and sat up in the plush velveteen train seat waiting for what would happen next.

“Your journal. Is the seat free?” The man’s gentle voice soothed him only a little as he held Dale’s magazine out, and gave an indicative nod toward the vacant seat beside Dale.

“Thank you, and yes the seat is free.” Captured by his outright beauty, Dale tried not to stare at the man. He dropped his gaze to the colorful shot on the cover, and accepted the magazine, holding it on his lap.

Dale struggled not to look at the passenger beside him, whose cologne now filled up his senses with a delicate, fresh, scent, a fragrance capturing the cool breeze crossing the ocean on a summer night, somehow full of promise. The suit the man wore was visibly expensive. Dale knew quality when he saw it even if it was only on a quick look. As a photographer for major fashion magazines, he’d gathered a knowledge and appreciation for clothes.

Dale stared ahead and wondered if this man was the passenger the train had stopped for. He edged a little away from the central armrest dividing the seats—their size was generous and the man wasn’t even close, but Dale could feel his presence as if gripped by a magnetic force. Finally, unable to help it, Dale chanced a sideways glance.
Copyright E.D.Parr 2017 Evernight Publishing 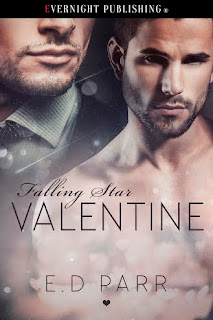