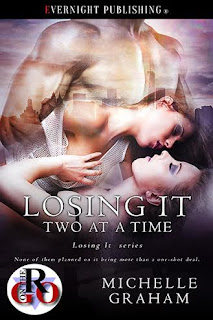 Hello Michelle!  Thank you so much for visiting Written Butterfly with me today!  It’s such a pleasure to chat with you.  So tell me…

This book is part of my Losing It series from Evernight Publishing. The premise is an online hook-up site which pairs virgins with experienced partners. In the first book (Losing It In Vegas) this is exactly how the plot played out. But since virginity is only a social construct anyway, and to keep it from getting old, I tried to come up with different scenarios. Losing It All Over Again is the story of a woman whose only lover had been her less-than-satisfactory ex-husband, so she’s trying to create the experience she wished she’d had the first time. Losing It In the Closet is about a young man who’s fighting his attraction to men and figures a one-time experience with another man will get it out of his system.

As I mentioned, I wanted to come up with unique scenarios for the series and imagined lesbians who were curious about having sex with a man. They’d never had penis-in-vagina sex so they were still technically virgins. I decided that motivation wasn’t strong enough though, and figured if they were trying to have a baby it would give them more incentive to find a man to help.

I usually start with a premise or scenario that might bring my main characters together. Then I spend a lot of time daydreaming about why the characters would be there in the first place, what kind of person are they are, who their family was, how they would react to different things. They’re fairly well-developed in my head before I really start writing. Of course, as I write and the characters interact with each other, sometimes I find that things go in a whole different direction.

Well, the Losing It series sort of came to me when I thought about my own first time. I was 18 and in a situation with a guy friend. I could have stopped things, but I was 18 and tired of being a virgin (the same attitude as Rowan in Losing It in Vegas). It definitely wasn’t a spectacular experience (which may have had something to do with being in a Chevette at the time) and I couldn’t help wishing I’d had a better first time, with someone who knew what they were doing. So I draw on bits and pieces from my life to add depth to my stories.

I have a story in the upcoming Owned By the Alpha anthology (which you’re also in! So excited to share antho space with you again). It’s called Running Home and it’s about a female werewolf who runs away from an abusive relationship with an Alpha only to be found by another Alpha, her fated mate, who has to convince her that they’re meant to be together. This story is a prequel, or origin story for a new series I’m working on – Demon Dogs MC – about a werewolf motorcycle club. 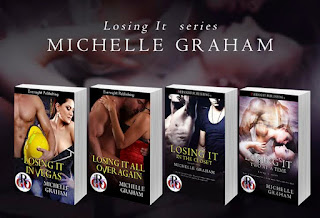 Blurb
Alexa and Vivian Parker have been together since high school. Neither one had ever been with a man, nor did they feel the need. Until they want a baby and can only get one the old-fashioned way. So they turn to hook-up site, Losing It, to find a sperm donor.

Carter Michaels didn’t anticipate having two virgins to please, but he’s more than up for the task, and he’ll help them as often as needed.

None of them planned on it being more than a one-shot deal.

On sale for a limited time: Losing It In Vegas

Blurb
Many people remember losing their virginity as an awkward experience filled with pain and followed quickly by regret. Online hook-up site Losing It, hopes to change that. For those who’ve made it to adulthood with their virtue intact, Losing It matches virgins with experienced lovers who will make their first time unforgettable, with no embarrassing emotional entanglements.

Losing It In Vegas is the story of twenty-one year old Rowan Cassidy who is sick of being a virgin. With no romantic prospects in sight, she turns to Losing It to find her a man willing to do the deed and leave it at that. Bruce McGovern is between lovers and is stuck in a dry spell so he takes a chance with Losing It.

He and Rowan meet up in Las Vegas and somewhere in the midst of all the hot sex, feelings emerge that neither of them expected.

www.michellegrahambooks.com
Posted by Beth D. Carter at 9:32 AM