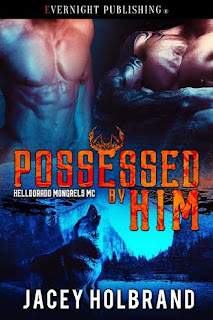 Yes, it is! :) Possessed by Him is the first story in the Helldorado Mongrels MC series. The series follows the lives of immortal shifters from different clans, stolen gold, an asshole of a president and individuals who find their mates.

Queho was a real man. Sources say the Native American was the first mass murderer in the state of Nevada and had cursed the land around the town of Nelson and the Techatticup Mine.

I’d been toying with the idea for this series for the past few years after catching an episode of Haunted Highway on Syfy regarding the Hellhounds of Eldorado Canyon.

My second book, Seduced by Him, is in the submission queue awaiting word on whether it’s been accepted or not, and I am currently in the process of writing book three, Enchanted by Him, and book four, Ruled by Him. I’m even playing around with some ideas for a spin off series.

This story is the first book in my series called Helldorado Mongrels MC. The series follows different immortal shifter families, a couple of humans, and the quest for stolen gold. It takes place in southern Nevada. I’ve been toying with the idea for this series for the past few years after catching an episode of Haunted Highway on Syfy regarding the Hellhounds of Eldorado Canyon.

In book one, Possessed by Him, two human brothers are returning to the canyon where, as teenagers, they had a frightening experience in a gold mine when confronted with wolves. Cameron, one of the heroes of this story, also can’t stop thinking of a man who’s been invading his dreams for years since the incident and is surprised when he comes face to face with him in the flesh.

Cameron and dream man, Gabe, are hitting it off and the trip is going pretty well until Cameron is kidnapped by a member of the Helldorado Mongrels MC.

Want to know what happens when Cameron finds out the guy he’s super attracted to is an immortal wolf shifter and if he escapes the Mongrels? Well, you’ll just have to read the book now, won’t you? *wink*

Forced to return to a place of childhood trauma, Cameron Russell fears he’ll have to confront the specter of the past once again. Instead, he comes face to face with the man of his dreams. Literally.

Unbeknownst to Cameron, Gabriel Dyson would do anything to help his human mate realize his destiny, including playing savior and invading Cameron’s dreams. When they finally meet face to face, all seems to go well. Then a member of the Helldorado Mongrels MC kidnaps Cameron, putting Cameron in mortal danger again.

While restrained, Cameron is told a fantastical story of werewolves, which has to be myth…right? Yet memories flare to life—visions of bites and kisses—making him question everything about Gabe.

Can Cameron and Gabe’s cosmic connection, their choices, and their love surpass the secrets Gabe has and the Mongrels’ evil plans? 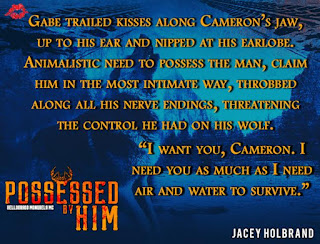 Cameron rubbed his clammy hands against thighs and took a deep breath.

Holy shit. His eyes are sexy. Bedroom like. Almost wolfish. The way I’ve always dreamt them.

“Cameron.” He accepted Gabe’s handshake, and when their skin made contact, a sharp, electric sensation zapped Cameron hard.

An acrid, burning scent filled Cameron’s nose. The smell reminded him of the time his platoon had been out in the field for a training exercise during a rainy season. Lightning had struck close by the camp. Too near for comfort. All the men had complained about the ozone stink.

Had he been hit by a random bolt? A peek at the sky revealed not a cloud in sight. He took another lungful of air. Slowly the burnt fragrance interchanged with a faint pleasant smell. He could barely make it out, but it kind of reminded him of the holidays.

What he perceived as reality seemed to morph, bringing the time in his youth when he’d first seen the man at the campfire to touch upon the present moment where the man, Gabe, now stood. Once again, Cameron couldn’t help feeling like they were connected in some kind of cosmic way and that he knew the man who stood before him. Knew all his loves and hates, his quirks, the way the man would look at him with a dark and sultry, passion-filled gaze after they made love. Feeling like something clicked into place within him, it was as if Cameron had found a piece of his soul that he hadn’t realized was missing.

Just like I felt years ago. But how couldGabe be him?

The whole situation struck him as being uncanny, but so right at the same time.

Cameron’s heart skipped a beat at the unbidden thought that popped into his head. Fighting the lust coiling within him and trying to calm his heart so it wouldn’t bang out of his chest, he reluctantly released Gabe’s hand.

“It’s such a pleasure to meet you, Cameron.” Gabe smiled.

There’s that grin I love. Cameron could have sworn the world slipped away and just the two of them were left. Him, alone with a stranger who wasn’t a stranger. He wanted to believe he stood before the love of his life, but he needed hard, tangible proof Gabe was who Cameron hoped he was. Not just some mystical, wishful thinking or facial expressions anyone could offer.

“Same,” Cameron managed to croak, then he cocked his head. Maybe if he played it cool and poked around with the right questions, he could figure out what the hell was going on. “We’ve met before, haven’t we? I feel I’ve seen you somewhere, like we already know each other.” 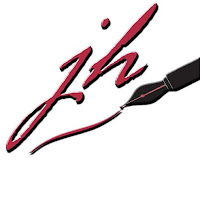 Jacey Holbrand believes life and love comes in all forms and should be celebrated. She’s committed to her muse and writing so she can share her stories with readers. Hot days. Sexy nights. Come play in her world.
Jacey loves to hear from readers! Click the link to eMail her: JaceyHolbrand@gmail.com


~ * ~
Thank you for having me on your blog, and readers, thank you for stopping by today!


Love & blessings to all!
Jacey