The Helldorado Mongrels MC are back! 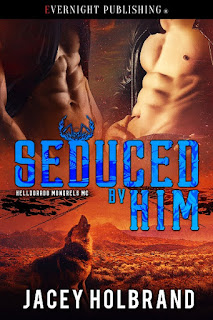 Yes, it is! :) Seduced by Him is the second story in the Helldorado Mongrels MC series. The series follows the lives of immortal shifters from different clans, stolen gold, an asshole of a motorcycle club president and individuals who find their mates.

Queho was a real man. Sources say the Native American was the first mass murderer in the state of Nevada and had cursed the land around the town of Nelson and the Techatticup Mine.

I’d been toying with the idea for this series for the past few years after catching an episode of Haunted Highway on Syfy regarding the Hellhounds of Eldorado Canyon. As for the individual book… Book one came about from an anthology call. It didn’t make the anthology, but was requested as a standalone. This book is Jarrod’s story, the brother of Cameron who was in book one, so the stories are just building off of one another.

My third book, Enchanted by Him, is in the works as is book four, Ruled by Him. I’m even playing around with some ideas for a couple more books in this series or doing them as a spin off.

Hey folks! I'm happy to announce that I have another story out! It's called Seduced by Him and is the second book in my series: Helldorado Mongrels MC. But first a little about me...

~ * ~ BIO ~ * ~
Jacey Holbrand believes life and love comes in all forms and should be celebrated. She’s committed to her muse and writing so she can share her stories with readers. Hot days. Sexy nights. Come play in her world.
Jacey loves to hear from readers! Click the link to eMail her: JaceyHolbrand@gmail.com 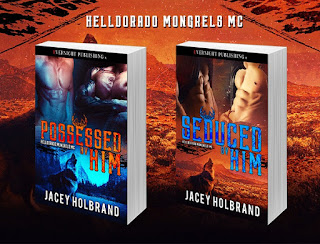 ~ * ~ ABOUT THE BOOK ~ * ~
This story is the second book in my series called Helldorado Mongrels MC. The series follows different immortal shifter families, a couple of humans, and the quest for stolen gold. It takes place in southern Nevada. I’d been toying with the idea for this series for the past few years after catching an episode of Haunted Highway on Syfy regarding the Hellhounds of Eldorado Canyon.

In book two, Seduced by Him, two human brothers are at the end of their camping trip in the canyon where, as teenagers, they had a frightening experience in a gold mine when confronted with wolves. Jarrod Russell, one of the heroes of this story, is jealous his brother found love, and he wonders when he’ll find his other half. Which doesn’t take long since he runs into him in a store and then in a casino.

Jarrod and Tex, the sexy stranger (who is based off of Brock O'Hurn in case you were wondering ;) ) he keeps running into, have a one night stand that’s turning into something more when Jarrod is kidnapped by Tex’s fellow Helldorado Mongrels MC members.

Want to know what happens when Jarrod finds out the guy he’s super attracted to is an immortal wolf shifter and if he escapes the Mongrels? Well, you’ll just have to read the book now, won’t you? *wink* 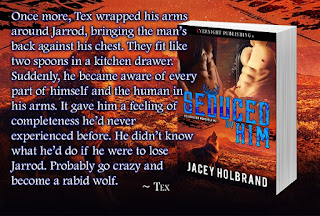 ~ * ~ BLURB ~ * ~
Wolf shifter and member of the Helldorado Mongrels MC, Dante “Tex” Valentin is restless and dissatisfied. He goes on a ride in search of excitement, never expecting to encounter his mate—a human male, who disrupts his world.

Jarrod Russell is envious his brother, Cameron, found love. Wondering if fortune will ever smile on him the same way, he runs into a man who rocks his world. A man he believes could be the love of his life.

When Jarrod and Tex’s paths cross again, a passion-filled night connects them. Because of who they are, though, they’re in danger from the Mongrels. Will their relationship be over before they even have a chance to love? 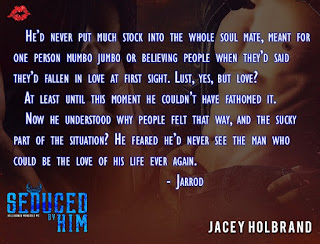 Bare as the day he was born, too, Tex sat on the edge of the bed, leaning back on his elbows, and took in the view.

Tall, athletic physique. Classically handsome features with a full mouth. Cock that sported a slight curve. It didn’t appear to be overly big but still seemed to be larger than average. Just like he liked a man’s dick.

He loved it when his partners had the touch of pleading in their voices, had amorous longing in their gazes, begging him to take them and use them as he saw fit. But this blond-haired, blue-eyed beauty wasn’t like the others. The lean, well-toned man didn’t fit the type of guy he’d normally go after—big, brawny, and rough around the edges—much like himself and the other Mongrels. No, the stranger from the store was the complete opposite, almost angelic, and the thought of claiming him sent lusty rivers of heat down into his rigid shaft.

“I want you to drop to your knees before me, take my cock in that luscious mouth of yours and suck me dry.”

A visible shudder racked the man’s body, and for a second he looked as if he might refuse, but then he closed the distance between them and knelt.

The angel positioned himself between Tex’s thighs and gently grasped his length. The bend of his fingers stroked him, feeling like the finest linen glancing against his skin. Tex’s body sizzled as his man’s appraisal of his body seemed to devour him. Then the stranger licked and kissed his cock and balls, sucked him into his mouth, and Tex felt as if he’d arrived home.

The guy laved its length and circled his fingers around its base, then traced the underside with the tip of his tongue and feathered his ball sack with the ends of his fingers.

Tex let his head fall back, enjoying the way the guy took command of his cock and savoring the delicate feel of the man’s moist and warm mouth on his shaft and his hands as they smoothed up his body.

So soft. Such a gentle caress. I love the way he’s touching me. Not enough though. Need to…

~ * ~
Thank you for having me on your blog, and readers, thank you for stopping by today!
Love & blessings to all!
Jacey