Hello Casey!  Thank you so much for visiting Written Butterfly with me today!  It’s such a pleasure to chat with you.  So tell me…

Q) Is this book part of a series?  If so, can you tell us about it?
Yes. Transcending Fire is the first story in the New World Bikers series. This series follows the lives of people from different biker clans in a dystopian society on Earth and in alternate realms, and how they deal with life and love.

Q) Can you give a fun or interesting fact about your book?
This story took over two years to make it out into the world. I’d written it back in 2015, and while it tried to find a home, I continued to work on it and it went from about 34K words up to the 55K+ word book it is now.

Q) What gave you the inspiration for your book?
I’d written the original version for a specific line (regarding fairy tales) at another publisher. Just as I was ready to submit the book, they closed that line. :( I was bummed, but it gave me a chance to tweak the story and add more to it.


I have the next two books for the New World Bikers series outlined, so I’m working on them. Under my C.R. name, I’m working on a time travel story, and since I’ve just gotten rights back on four short stories, I’ll be tweaking them and making them into contemporary westerns like the others I have out.

Hello! It’s been quite some time since I’ve had a release, and now I can say all that’s changed. A big thank you to my host for allowing me to visit today and share my story Transcending Fire. This erotic, futuristic, dystopian story based around different motorcycle gangs has had quite a journey to get to this point. Perhaps one day I’ll share the two-plus-year jaunt this story went through to find a home. Luckily, it finally has. Even with all the trials it went through, I still love this story. It’s one of my favorites that I’ve written, and one that I didn’t get tired of during the editing process either. Yay!
A man dealing with an Earth in chaos. A woman from an alternate universe hoping to find her destiny. Two motorcycle gangs and a real bad ass who wants to ruin everything. What’s not to like? 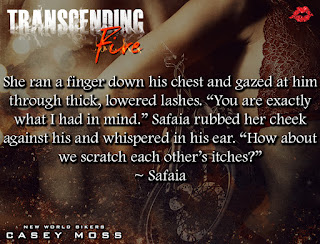 Hunter Macario wants one thing—a place to belong. When given an opportunity to solidify his position in the motorcycle club, Devil’s Thunder, he takes it.

Dragon’s Clan member, Safaia King, believes she’s found the man from her people’s legend and her dreams. She has one goal, even if he’s in a rival club—to make Hunter hers and keep him safe so he can fulfill their destiny.

After Hunter makes a huge mistake, he’s sent to where Safaia lives—an alternate universe called The Den. In this new world, sex, battles, and secrets abound. Hunter must survive The Den to right some wrongs or else he could lose everything he’s ever gained, including his home and Safaia’s love.

A wicked glint lit her eyes, and a playful grin spread across her face. She smoothed a hand down his hard chest. “I love the definition of your muscles, Hunter, how they shudder beneath my fingers when I touch you.” Inch by inch, she continued sliding her hand down his torso. She moved her hand between his skivvies and skin. Saf circled his cock and stroked him in time with the motions of his fingers within her. Desire pulsed through his body, setting it aflame. She pressed her face against his chest and playfully bit his pectoral as she rode his hand.

Adrenaline and arousal increased his breathing rate, and a warm buzz raced through him. The pull between them seemed so intense, undeniable, as if they had to be together or perish. He felt like one of the club’s customers addicted to black chip and needing a fix before he went crazy with want. And his drug of choice?

He wanted to eat her up. “I want to taste you. Lick up your juices and have you squirm beneath my face.” Hunter yanked down her jeans and repositioned her until her ass was at the edge of the boulder.

Sinking to his knees, he placed himself between her legs. Looking forward to tasting her sweetness and feel her softness after facing the harsh realities of his life, he traced a line of gentle kisses along her inner thigh from her knee to her pussy and then fastened his mouth on the sensitive folds between her legs. When he dipped his tongue into her canal, she shifted her butt to allow him better access. He reached up and snaked his rough hands under her shirt, concerned only for a moment whether she enjoyed or loathed the coarse touch of his dry, work-worn skin. She moved the cloth and her bra out of the way.

Pushing away all his thoughts and focusing on her—his carnal treasure—Hunter kneaded her tits while he teased her clit. He loved the taste and scent of her musky flesh and lapped up her essence as he said he would.

She grasped his head, weaving her fingers in his hair. “Oh, great Universe. This is. This is.” She panted and grappled with his locks as a low, deep moan rolled from her throat. “I think I’m going to come.”

The first night they’d met, their lovemaking had been hot and fast, more wham bam thank you than let’s linger and relish this. This time, though, he wanted to savor her, make her feel all sorts of naughty pleasure as he took his own.

Saf bucked and tried to scooch away, but he grabbed her hips and kept her from moving away from him. Unrelenting, he tongue fucked her. She struggled and wriggled, but he continued his assault, plunging his tongue in and out of her, licking up her wetness, and nipping at her clit. Safaia pressed the back of his head and lifted her ass. Spasms racked her body. She cried out his name.

Bringing her to orgasm thrilled him, but his selfish streak came forward. He wanted to enjoy her and feel his own pleasure, so he rose, stepped back, and removed his jeans. 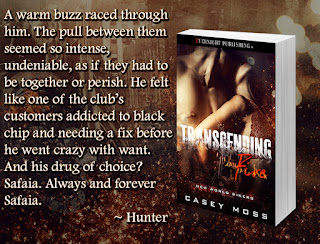