Blast from the Past.... Spotlight on Paper Kisses! 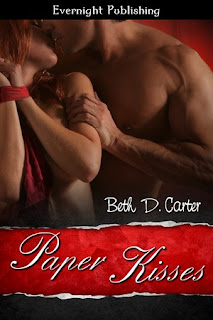 When Alannah’s husband tells her she’s boring and he doesn’t want to be married to her anymore she spirals into a world of hurt and confusion.  She decides to go back to her hometown in to figure out where she lost the confident girl she used to be.

These were the inspiration pictures for my characters: 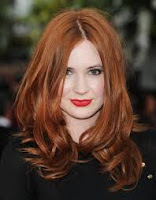 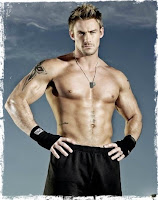 “Now,” he said. “For the rest of the night, the only communication I want from
you is when I ask you a direct question about these bonds.  Do you understand?”

“What if I have to pee?  Or if I don’t like what you’re doing?  Or-”
He slapped her on her ass cheek and she jumped, yelping in surprise.  “I told you,
I only want you to answer direct questions.  Do you understand, Alannah?”

“Um, yes.”
“Good.  Now hold out your hands.”
With her stomach doing flip flops and her heart pounding, she held out her arms.  Something looped around one wrist and she felt it being buckled.  Then the same thing happened on the other wrist and when she tested them, she realized a very short chain linked the cuffs together.  She flexed her wrists and realized either soft cotton or linen wrapped around her skin, so at least she wouldn’t worry about chaffing. Sky slipped his arm around her and helped her forward and from her brief glimpse of the room, Alannah knew he was escorting her to his bed.  A second later, she felt the soft duvet brush against her knee.  Sky helped her onto the bed, settling her toward the head board, and then he raised her arms and hooked her bound wrists above her head.  She pulled at them, but whatever he had chained her to was unbreakable.
She felt disoriented and a little uneasy at not being able to see or having the movement of her arms.  She was open, totally exposed except for a bit of lace covering her sex.  She squirmed even more and tried to get to her knees in an effort to gain some leverage.
“Stop moving,” he ordered and she obeyed immediately.  “Tell me how you feel.”
“How I feel?” she mimicked sharply.  “How do you think I feel?  I’m uncomfortable. My wrists are bound, I can’t see.  Damn it, Sky-”
He rolled her over and slapped her ass cheek again.  Hard.  She gasped and wiggled her bottom, shocked to realize her pussy was beginning to get wet.  Being spanked turned her on?  What the hell?”
“That’s not what I asked,” he said calmly.  “Shut off what your mind is telling you.  How do you feel?”
“I feel…vulnerable,” she said.
“Good.  What else?”
When he asked the question, his hand caressed the burning spot where his hand had smacked, creating a blanket of pleasure that smoothed over the pain.
“I’m…turned on?”
She hadn’t meant to make it sound like a question but he took it as one and again lifted his hand to spank her.  Fire licked her skin and she buckled a little, but as soon as he began caressing the area she calmed down.  Holy fire crackers, she did like being spanked!
“I’m turned on,” she assured, although she was a bit breathless.
His fingers left her ass cheek and dipped between her legs, under the lace of the thong, to find the truth to her words.  Alannah knew moisture steadily leaked from her pussy and he pressed into her slit briefly, all too briefly in her opinion, to tease her.  And then he was gone.  She felt the bed dip as he settled her back onto the bed, her hot ass finding the cool duvet soothing.  Not being able to see what he was doing built the anticipation to much that she almost became super hyper sensitive to each and ever noise around her.
He moved around the room.  A drawer was opened. Something was placed on the nightstand.  And then his hands were once again on her, but this time he was sliding them up her leg and quickly, briefly, gave silent thanks that she’d shaved.  But as soon as the thought formed it fled because all of her focus rested on what Sky was doing to that leg.  He pulled it out straight and placed another cuff around her ankle.  A second cuff went around the other ankle and he flexed each foot to make sure the bonds didn’t cut off her circulation before something was hooked to each cuff.  When she went to move her leg, she realized a bar had been wedged between them and a second later, her legs were pulled and she heard a click.  Now her legs were spread wide and she was completely, utterly, helpless.
“How are you feeling?” he asked.
It was extremely difficult to express all the emotions hurtling through her but he wanted an answer so she tried.
“Helpless.  Confused.  Panicked.  I’m wondering if you’re going to hurt me.  If you’re some type of pervert.”
His chuckled at that as his finger tips trailed over her body, staring from her feet, up her leg, under her thing and through the curls guarding her sex, then up her belly and over her nipples.
“Some people have to be tied up to be completely free,” he told her.  “You use the word stop and I will.  All of this goes away.  But so does your chance at learning what you really need, Alannah.”