Hello Ronnie!  Thank you so much for visiting Written Butterfly with me today!  It’s such a pleasure to chat with you.  So tell me… 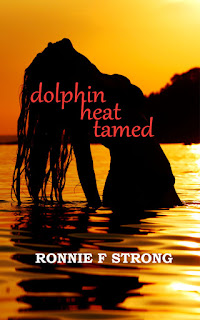 
My protagonist character in The Laundromat was based on a chance remark of a person I was chatting with online. She said in passing that she had visited her local laundromat and there was a man there whose eyes boggled. Our interactions and her brief description of him led to the germ of an idea for an entire story. The characters and their roles required for the telling of this story followed from this basic premise. I used people in my life to visualize the physical appearance of the main characters. I gave them traits and values to guide their actions. I then let their personalities grow in the context of the situations I am putting them into. To some extent this means letting go and having the characters deal with the situation and their own responses.

I always intended The Laundromat to be part of a series, but I have not yet been able to revisit that place. I will one day. I have moved onto other books and stories since. My most recent work is Dolphin Heat Tamed.

Dolphin Heat Tamed is an experiment. It started as a short story inspired by a holiday of mine at a beautiful spot on the Australian coast in northern New South Wales. Seeing dolphins and whales in their natural environments is awesome. They are such magnificent creatures. My first story extrapolated from that experience and a subsequent dream. My first story was popular but could not be distributed via Amazon or some other key outlets for content reasons. It breached their standards around allowable sexual conduct.


Because I like the story I decided to rework it for a wider audience. I have also combined it with some of the related haiku that I have been playing with for the last few years. The result is a kind of hybrid illustrated book featuring the revised story in prose and haiku. I like where it landed although it makes it a little unusual in the genre.


I try to write about serious literary themes while staying true to the erotica genre. My stories feature a lot of sex. Lots and lots of sex. Readers either love this about my writing or it puts them off entirely.


I write what I like to write and hope that my readers will enjoy it.


I tend to prepare a basic outline for my story with a beginning a middle and an end. I think about the narrative structure. My stories are basically all about a journey. Usually the hero has lost love and is going to find love again with a few hurdles along the way. I start with the main character. The other characters are going to either create those hurdles or help her deal with them.


My next project is undecided. I have too many ideas at the moment to know which one will proceed. One idea is to create a collection of short stories based on common sexual fantasies. Each scenario would have a story written from both the man and woman’s perspective, highlighting the differences and similarities in emphasis. Another idea is another short story collection focused on the wants and experiences of women with different stories to tell. Having said that, I am itching to write another novel.

A tourist boat is heading out on a river cruise to see dolphins. There are only two women aboard and this is no ordinary tourist jaunt. A young woman is the captain for this trip. Her beautiful passenger's presence sends her thoughts and body into sexual overdrive. A curtain of thick heat and excitement envelopes the boat and the women travelling the river.


After that start to my morning, I allowed myself a languid breakfast, not rushing. After a long shower I got into my most fetching white cotton bra and panties. I was in that kind of mood and I looked dead-set sexy. I would have preferred skimpy black lace, but that was not practical for today’s sweltering heat. Then I got into the skimpiest pure-white shorts and singlet top that I could get away with as my father and mother’s employee.


Within minutes of beginning walking, I was sweating from the unusually high humidity. For a Saturday morning, there were few people around as I made my way to the jetty.


Those who were out and about in the relative cool of the twenty-eight-degree morning wanted to get things done before the heat of the day kicked in. Most people were avoiding venturing out. They remained inside, hiding from the heat in their air-conditioned apartments, homes and shops.


There was no one waiting at our boathouse office when I got there. My father would have taken out a few keen anglers at dawn. They would be back soon, complaining the fish were not biting.


It would not worry me if we had hardly any customers for our boat cruises today. Whale and dolphin watching had given us good business over recent years. Our seven boats were heavily booked most days. A slow day or two would not be cause for panic. Maybe my parents could relax a bit and avoid the heat too.


As I opened the office a stunning woman appeared on the promenade. She slowed, waiting for me to make my way inside. I could only take in a little of her appearance as I fussed with the locks. What I could see of her had me flustered and fumbling. She cooed to me in a melodic gentle voice. “Don’t rush honey; I can wait until you are ready for business.”


Something about the way she said that, with a hint of playful impishness, got me extra hot and bothered. Her clothing was much like mine, her mature and lovely body more graceful and full. Quite the bombshell, her body was not conventional pin-up.


She looked like a woman-shaped torpedo with her powerful sleek curves. Her legs were long and strong, bulging with muscle. Her neck was long too, not thick, yet somehow the torpedo impression remained with me. I kept glancing at her as I switched on lights, checked the radio, and did the other daily opening routines.


She wore no cosmetics or jewellery and her feet were bare. Her singlet top highlighted her full round breasts under the thin straps across the bodice. Her skin was glistening golden, not brown or white. Micro shorts showed off her tight butt and powerful legs. Her muscular thighs were larger than for most women. They complemented her statuesque body.


Short dripping-wet black hair framed her angular, almost squarish face. She did not need makeup. Her full lips and cheeks, grey-green eyes, black hair and perfect skin were stunning enough. What made her one of the most beautiful women I had ever seen was her nose. How it set off her face. It was largish, blunt and round, with flaring nostrils. Something else too, other than the mischievous glint in her eye had me entranced.


The way she held herself and shone with a glowing intensity was enthralling. I could not take my eyes away and tried to take in everything about her, helped by her skimpy clothes. The suggestion of a small circle low on her throat took my eye. It looked to me like she may have had a tracheotomy at some point. Could she have choked on something as a child, or had some kind of accident? I pondered this blemish upon her otherwise outward perfection, completely besotted. I forced myself to stop staring at her.


Uncomfortable prickling sensations were breaking out all over my body. Being in her company had me shrinking back to a nervous, gawky and insecure teenager. I thought I had shed all that awkward self-consciousness. Now all my self-doubts were back again.


I got past her somehow and went behind the desk, using it as a shield from her overwhelming impact upon my senses. She waited for me to collect myself then spoke, cooing like before.


“Could you please take me up the river to see the dolphins? I can pay whatever you need to charge for a special trip on one of your boats.” Her voice was gentle and vibrant; the sound and energy of her voice touching me right to my core…

Sign up for my monthly newsletter at ronniestrong.com and get a free copy of The Laundromat from Smashwords