New Book in the Dark Light Series by Rose Wulf!

Welcome Rose to The Written Butterfly! Thank you so much for stopping by! 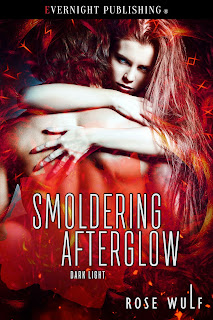 Of course! Smoldering Afterglow is the 4th book in the Dark Light series. The series is about the endless battle between angels and demons, and the humans who get mixed up in the chaos. This particular book is the story of Madelyne, a Nephilim (which is a half-angel, half-human, for those who don’t know!), and the demon-of-many-mysteries, Sinclair.

Both characters were introduced in previous books, with small roles. Madelyne is the younger sister of the heroine of book 2, and has quite a traumatic past. This story is set some years after the events of the 2nd book, but Madelyne is in many ways only beginning to learn to function in society again. As for Sinclair, he was introduced in book 3, and his true goals are revealed in this story—as well as the reason behind his penchant for mystery.

Smoldering Afterglow is a different take on a second chance story. Instead of these characters having any previous history with each other, it’s more that both have significant personal barriers preventing them from simply enjoying life. Through finding each other, learning to trust and ultimately falling in love, they thus have a second chance to experience a fulfilling life. And in that way, this story is also about healing. Even though it’s technically about a war between supernatural entities!

Oh, that’s tricky. Well, without spoiling too much, I can say I really loved exploring more of the demonic side of the Dark Light world. I explored some of the angelic side in previous books, but this is the first time I’ve had solid opportunity to share such insight into the Hell realm. Sinclair is a character who is old enough, and educated enough, and experienced enough, to have all manner of knowledge—which was quite fun to play with!

On the flip side, it’s difficult writing a character with significant trauma without a comparable level of your own trauma, I think. So expressing Madelyne’s struggles was definitely a challenge for me, but nonetheless her past and her perspective were key factors to this story, so I did my best.

Hmm, not as much as I used to, I wouldn’t say. I write every story on my laptop, of course, and I’m old-school just enough to still be using Microsoft Word instead of any more ‘writer-oriented’ program that might be out there. Really, I’m just a creature of habit, and mildly afraid of new things. I like what I know, exactly because I’m familiar with it!

Aside from that, I prefer to write either in silence or with my music playing in the background. I get easily distracted by the flashing screen of the TV if it’s on in the background! Oh, and settling in with a good cup of coffee is definitely a plus, though I’m not always so lucky.

There are a couple of scenes that come to mind which I’m particularly fond of. One is a personal scene between Madelyne and Sinclair, pertaining to scars and trying to push past trauma. The other is a very different kind of scene, where I introduce a new creature which creates all sorts of havoc for the characters. When my beta reader read that scene, she said I described them so well she felt literally repulsed. It was quite the compliment!

But if I’m being honest, Sinclair was rather enjoyable to write most of the time. The scene I chose for my teaser on the publisher’s page is another of my short-list favorites, where he has to come to Madelyne’s rescue (I’m a sucker for that kind of trope, regardless). There’s also another contender, but I can’t describe it without spoiling too much!

I have several future projects on the horizon, honestly!

In terms specifically of the Dark Light world, there are two more books to come after Smoldering Afterglow. The story I’m planning for book 5 will follow two characters who were both introduced in this book, but I won’t spoil which ones—you’ll have to read it for yourselves and guess! In fact, I’ve officially introduced the couples for both the remaining books. Book 6 will be particularly dramatic, I suspect.

I do have another book already in the process of publication, though I don’t yet have a release date. That book is called Orchid’s Heart, and is a standalone historical fantasy romance. I’m incredibly excited to share this story with everyone! This is a tale of forbidden love between a Crown Prince and a young woman whose spent her entire life in service of the royal family, and what happens when her life is threatened. I loved writing this book so much, I struggled with bringing it to an end!

And currently I’m working on the 7th and final book in my other ongoing series, the Night Shadows series. This book is Jasen’s story, and while I won’t spoil who his love interest is, I will confirm she’s someone who’s been previously introduced. I have been excited to write Jasen’s book since I first introduced his character (back in book 1), and I think readers will be surprised in a very good way when they embark on his journey!

Find Smoldering Afterglow at your favorite eBook retailer, including: