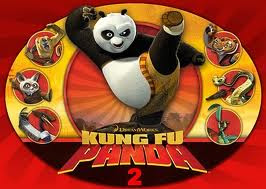 Hoodwinked Too! Hood vs. Evil- The sequel to 2005’s Hoodwinked that stared Anne Hathaway as Little Red Riding Hood. I saw the first and really liked it, even though the animation wasn’t as sophisticated as it could have been. The new one has Hayden Panettiere as Red and it looks like the animation hasn’t come all that far in six years. I have a sneaky suspicion that the trailer has shown us all the best parts of this movie.

Bonnie & Clyde vs. Dracula- Yes, this really is a movie that is coming out though it was filmed in 2008. After seeing the trailer I can understand why it took three years to find a distributor! I suppose someone thought it would be cool to see the 1930’s outlaws take on a vampire…why not? Vampires are cool now-a-days. But I think that someone had a few too many drinks. This movie is being compared to Shaun of the Dean and Zombieland…uh, really?

Kung Fu Panda 2 – This trailer had me laughing out loud, which is a really good thing. All the star voices are back, thank goodness…couldn’t see Master Shifu as having any other voice but Dustin Hoffman. We got some new ones too…Gary Oldman, Jean-Claude Van Damme, and Michelle Yeoh to name a few. So two big thumbs up, I’ll be eagerly waiting!

The Conspirator- Okay, any trailer that has James McAvoy in it I am definitely interested! Based upon the trial of Mary Surratt, this movie takes into the days immediately following the assassination of Abraham Lincoln. History shows that she and three others were hanged for the conspiracy but what really happened, eh? Directed by Robert Redford and staring Robin Wright as Surratt, this should be a great film!

Bad Teacher- Cameron Diaz stars as a teacher who is just biding her time till she can find a rich husband…enter the sub (and heir to a famous watch company) played by Justin Timberlake. Weren’t they dating at one time? Oh well, Cameron doesn’t see to go out on a stretch in this one as she goes from foul mouth teacher to one with a heart of gold. The jokes didn’t seem funny enough to merit $12.00 for a ticket…mental checklist: Netflix.

Friends With Benefits- Not to be confused with the other Friends With Benefits …wait, that was No Strings Attached…whatever! This film with Mila Kunis and Justin Timberlake actually seems like it’ll be hilarious. I don’t think I’d mind shelling out the exorbitant ticket price to go see if it produces that chuckles I had while watching the trailer.