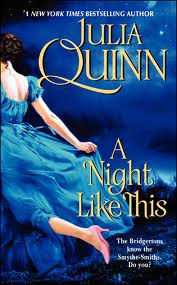 If you’ve never read a Julia Quinn novel than you’ve been seriously missing out.  She writes with such wit and humor that half the novel is gone before you know it.  In her current series, The Smythe-Smith family, both novels have been delightful, as well as comedic.  Ms. Quinn has the perfect sense of timing necessary for laugh-out-loud enjoyment.

I’ve been a big fan of Ms. Quinn for a long time.  In fact, she’s the type of writer I wish I could be.  The first book of hers I ever read was titled Minx, followed by the unforgettable Bridgerton’s series.  There were a few misses, I thought, with that series, but with Just Like Heaven and A Night Like This, she has returned to full form.

The Smythe-Smith family has a musicale every season, despite the fact that no Smythe-Smith actually knows how to play an instrument.  Faithful readers of Ms. Quinn have been reading about the Smythe-Smith musicales through many, many books, and it’s delightful we finally get introduced to the whole family properly.  In A Night Like This, it is Daniel’s story when he falls for a woman running from her past.  The dialogue is witty, the action is fast past, and the love scenes are light and tasteful.  I know, as an erotica author I’m supposed to want the smutty stuff, but Julia Quinn’s style of writing is airy, almost carefree.  You read one of her books to enjoy and relax and having heavy sex in the pages of the book would distract.

I’m not saying there isn’t romance and sensuality.  It’s actually the type that makes your heart pound and hope that you’ll find such a romance one day.  With summer right around the corner, and maybe the beach or pool side calling your name, Julia Quinn is the perfect accessory to any relaxing afternoon.

BLURB:
Anne Wynter might not be who she says she is . . .
But she's managing quite well as a governess to three highborn young ladies. Her job can be a challenge—in a single week she finds herself hiding in a closet full of tubas, playing an evil queen in a play that might be a tragedy (or might be a comedy—no one is sure), and tending to the wounds of the oh-so-dashing Earl of Winstead. After years of dodging unwanted advances, he's the first man who has truly tempted her, and it's getting harder and harder to remind herself that a governess has no business flirting with a nobleman.

Daniel Smythe-Smith Might be in mortal danger . . .
But that's not going to stop the young earl from falling in love. And when he spies a mysterious woman at his family's annual musicale, he vows to pursue her, even if that means spending his days with a ten-year-old who thinks she's a unicorn. But Daniel has an enemy, one who has vowed to see him dead. And when Anne is thrown into peril, he will stop at nothing to ensure their happy ending . .