I was born on December 21st so the Winter Solstice is a very important day for me.  It is the time of death and rebirth, to celebrate the rebirth of the sun, who warms the frozen land.  Winter Solstice is the shortest night of the year.  From this day forward, the days will become longer.

Growing up in Missouri, we had snow.  Every Christmas felt special because it was cold, school let out, and the anticipation of Santa was overwhelming.  Now I live in Los Angeles, and the only time I've seen snow was when we travel to Big Bear for snowboarding.  I try hard to keep that Christmas feeling alive for my own son, but year after year the traditions of my childhood seem so far away.

With Christmas being so commercial now-a-days, tradition has become very important to me.  I have a six year old son that certainly expects Santa to bring him presents but I also teach him that he's to give back to those families who may not have enough at this time of year.  I read a special book called 'The Shortest Day; Celebrating the Winger Solstice' by Wendy Pfeffer and Jesse Reisch.  But I also read to them The Christmas Story, The Night Before Christmas, and There Was An Old Lady Who Swallowed A Bell.  And though I may not be very religious I don't shield my son from religion, I simply teach him that there are many beliefs and he must pick his own path.

My Christmas tree might be fake, but the decorations were hand picked by my son, including the decorations he made in school.  To the right of the tree I have a Menorah to honor our Jewish friends.  I also have the spring of mistletoe and smell of pine lingering in the air.  I have Rudolf the Red-nose Reindeer recorded on the DVR.  Of course, for me, holidays are about food.  I reserve the Winter Solstice for making only the special once-a-year kind of food.  Like cakes soaked in cider, eggnog, snowflake shaped sugar cookies, and divinity. (I tried adding a recipe for divinity but it's not showing for some reason so I'll try again on Wednesday for my Hump Day Hook!) 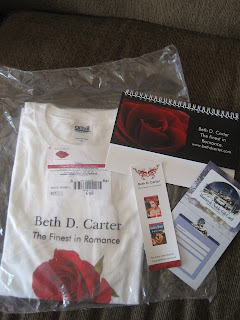 My thanks for taking the time to visit with me during this wonderful season!  As part of my own appreciation, I have a wonderful gift package for one lucky winner, which includes a t-shirt, a desk calendar, and a $10 gift card from Barnes & Nobel.  All you have to do to enter is leave a comment and my assistant (AKA: son) will pick one name when the blog hop is over, so please leave a way to contact you!  I will also give away one PDF ebook of any of my titles (winner's choice) to the second name drawn.

Please visit the others in the blog hop!
Posted by Beth D. Carter at 5:44 PM