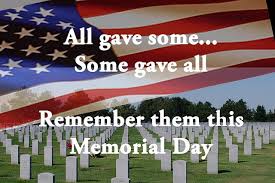 In the United States, Memorial Day is the day when we stop and remember and give thanks to the men and women who have died for our country.  Formerly known as Decoration Day, it originated after the War Between the States (1861-1865) to commemorate the Union and Confederate soldiers who died in the Civil War.  By the 20th century, Memorial Day had been extended to honor all Americans who’ve died in military service.

I give thanks to those who've died in service.  And although my father didn't die while in service, he devoted his life to the Army and I wanted to share my last memories of him:

This weekend is particularly hard for me because my father served in the Army for twenty-two years, retiring as a Master Sergeant.  I lost my dad, James Cowsert, last year in a way that still leaves me sleepless.  I held his hand and watched for four hours until he drew his last breath.  I was the one that called time on him, 2:15 on a Monday afternoon.  And he knew he was dying.  There wasn’t any peace or blessing that his pain was almost over.  I saw a man who wanted to live but his body just wouldn’t let him.  When my father died, I was holding one hand and my step-mom the other and I laid my head on his chest and cried.  I cried for an hour, until his body began to harden and his skin turned pasty.  Then I forced myself to walk away because I would have stayed like that for days.

It’s been fifteen months and I still cry at the drop of a hat.  I don’t know how to put behind me the heartache I went through during the four hours I had to watch him die or the crap I went through to make sure his final wishes were carried out.  My boyfriend tells me I was lucky that I got to say good-bye, to say my peace to him, but no one should watch their parent suffer and fade away like I did.

So on Monday, Memorial Day, I will say a little prayer in my heart, giving thanks to all those who have died in service to this country, and I’ll send a special thought to my father, wherever his soul may be, for giving twenty-two years.
Posted by Beth D. Carter at 11:38 PM