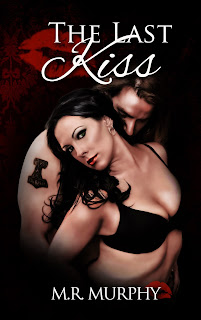 Here's an exciting excerpt from M.R.Murphy's The Last Kiss:

“Hey, man, did you get everything done?”
Staring back at his roommate, Aidan smirked and nodded his head to answer Michael. “Yup, finishing touches are in here. Just hope she likes it.”
“Damn, dude, since when are you the romantic type?” he chided.
“You don’t know her; trust me she's worth it.” Zipping up his bag, he set it against the door and turned to the mirror for one final inspection.
“So what time does her flight get in?” Hanging back on his bunk, Michael watched as his friend fretted over his shirt. “Dude, seriously, you look fine. Stop being such a pansy.”
Cocking a skeptical brow, he whipped a pair of rolled up socks at Michael, hoping he'd get the point and piss off. “She gets in at three. Heading out now. So don't fuck with my shit while I'm gone.”
“You gonna bring her back here?”
“Fuck no. Why would  I?”
“Why not? Or are you afraid I'll steal her from you? Probably a dog anyways.” He barked out a laugh.
Aidan instantly regretted showing Michael Raeve's picture, and allowing him to speak to her. Deep down, Aidan knew Michael totally understood his head over heels love for her.
“Sure…you and Raeve?” cocking his brow once again, Aidan reached down to grab his bag, “That'll be the day.” With that, he left the small room and walked to his truck. His hands grew slicker with sweat with very step he took. The air was thick and humid even in the Texas desert as sweat beads trickled down his brow.
It had been a few months since he last saw her, and only on a whim chance, he had arranged for her to fly down to his base. His heart tripped into overdrive as he imagined her in his arms again, kissing her urgently, feeling her body pressed against him. He had spent the better part of the day setting up their hotel room littering the bed and floor with flower petals and scattering candles all over the room. He had meticulously staged it for the perfect seduction. Aidan would do whatever it took to make her forget the haunting darkness of the past that lingered in her eyes. He vowed to free her from those nightmares, at least for the night.
The drive to Austin dragged as traffic flooded the highways. His nerves were on edge, and he prayed he'd make it in time. He could picture the look on her face when she saw him waiting coyly at her gate, flowers in hand, ready to pull her into his arms for a long awaited kiss. Her eyes wide, as her smile and a resplendent blush deepened the closer she stepped toward him. His cock twitched as he imagined the feel of her lips on his. He dreamt of bringing her closer still as he slid his hand to the small of her back to keep her locked in his embrace for however long she'd allow. Smiling at the idea of staring deep into her eyes for the first time in months, he tightened his grip on the steering wheel and gunned the accelerator.

Can two star-crossed souls learn to overcome the past in just a few days and pick up where they left off? Or are the doomed to travel the same road once again?