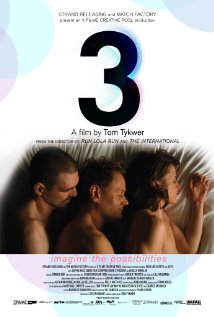 I don’t watch many movies at home because it’s takes me hours and hours due to my son who wants me to play Wii all the time.  But when I read the synopsis of the German movie “3” I bit the bullet and streamed it from Netflix.

I finish! (thanks, son)  And was really surprised by this film.  It’s a true MMF story all the way.  I half expected to find out this was a book turned into a live action because the plot succulently falls into an erotica romance category.

Some SPOILERS below and yes, I might spoil the surprise, but hey…it’s ménage.  As I said earlier, it is a German film so if you don’t like reading subtitles then be warned.  It starts out with Hanna and Simon, a couple that has been together for twenty years.  As with any long term relationship, they’re more friends than lovers.  Buddies, really, supporting each other through life, and there are some intense situations right away.  Simon’s mother tells them she has pancreatic cancer and takes valium a week later to kill herself.  Then Simon is diagnosed with testicular cancer and is taken immediately for surgery.  (Which, by the way, would NEVER happen here in the States so that was weird to see.  Literally, he’s wheeled into surgery within five minutes)

Anyway, what changes for both of them is one man named Adam (or as I like to call him the German Gordon Ramsey).  Hanna meets Adam through work and through a series of unusual circumstances.  And on the day Simon gets his surgery, Hanna starts an affair with Adam.

Feeling like half a man, Simon goes to his swimming spot and meets…Adam.  The two men talk and Simon tells him about his surgery and Adam wants to see the scar but ends up giving Simon a hand job.  This, of course, throws Simon in a tailspin with a crisis of sexual identity.

I should note that Adam does not realize that Simon and Hanna know each other, and he carries on affairs with both of them.  And their time with Adam also rejuvenates their own sex life.  So when Hanna ends up pregnant, she doesn’t know who the father is and goes to tell Adam…only to find Simon with him.

In true ménage fashion, the Simon and Hanna realize they don’t want to live without Adam and Adam has fallen in love with both of them.  And the ending is truly wowser.

It’s an artistic film, with bits of noir thrown in to help show the feelings of the characters.  It takes the stereotype of a mid life crisis and throws in a twist. If you love M/M action as well as a good ménage story, you should give this film a try.
Posted by Beth D. Carter at 11:18 PM