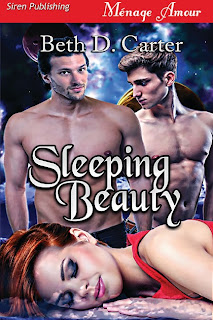 He began looking around for an escape route. They were too far from the elevators and already boxed in from the rear. The only other thing was the trash chute.
Ah, fuck!
He squeezed her hand. “Do you trust me?”
“Yes,” she answered without hesitation. Her quick response warmed his blood but also made him pause. He’d never had someone’s unquestioning loyalty before, except for Noah’s. It made his heart pound in his chest.
“Then trust me that you’re not going to like this,” he said grimly.
“What?”
The next second he turned and ran for the trash chute. It opened when he got near and he picked her up, throwing her in feet first. The next instant he grabbed the door frame and hoisted his own body through it, sliding headfirst into the nastiest-smelling tube in the universe.
++++++++++++++++++++++++++++++++++++++++++++

Ronan Hark and Noah Kabot are deep space salvagers, partners in business as well as in life.  While investigating an old ship they discover a cryo chamber holding the frozen body of a beautiful woman who’s been asleep for thirty-one years.  Against Ronan’s better judgment, they take the chamber and wake her up.

Alivia Carian has spent her life living as a sheltered yet unloved princess, until the day she is forced into cryostasis.  It was only supposed to be for a short time, but somehow her ship crashed and she became nothing more than a memory.