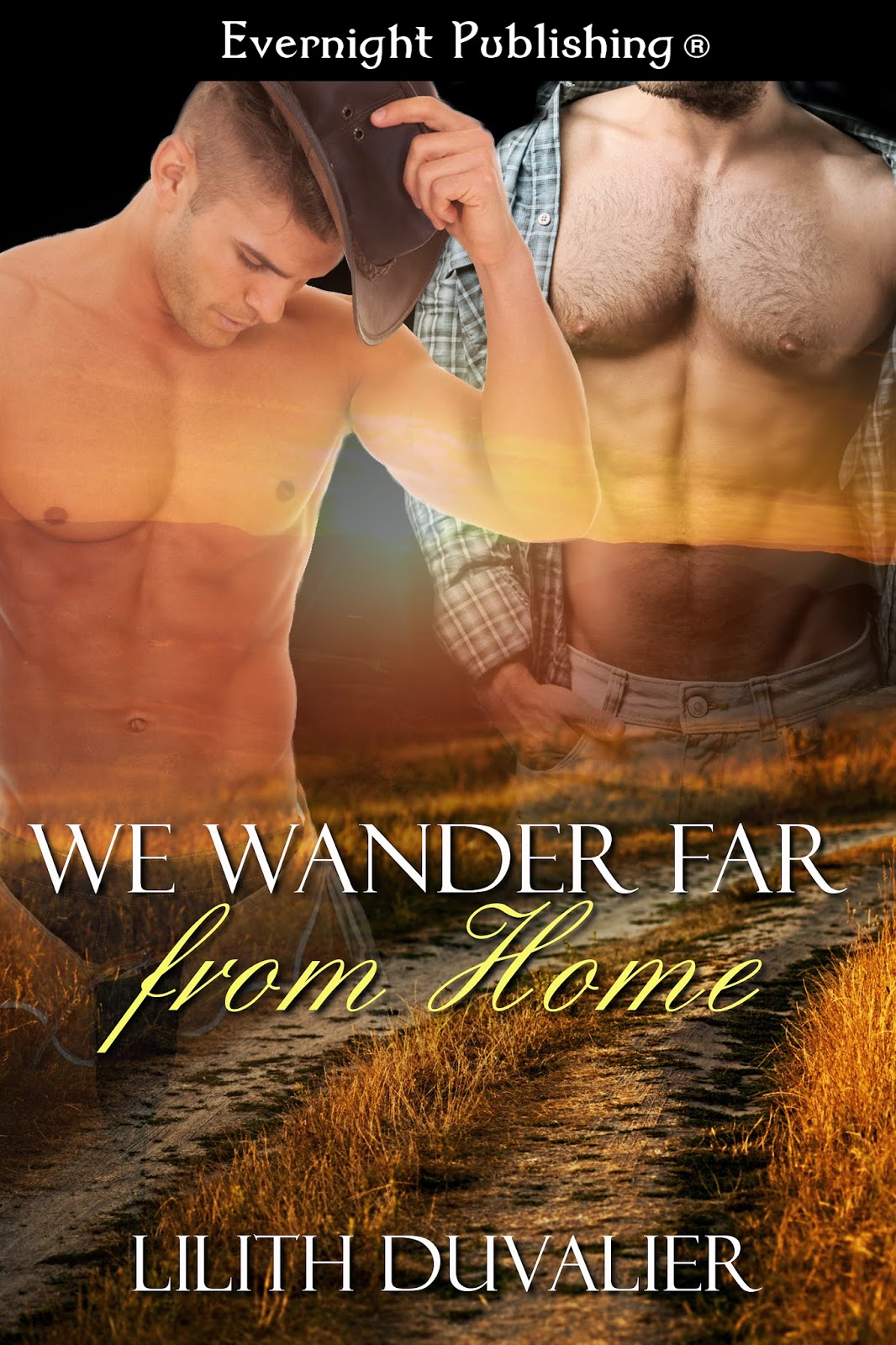 Hello Lilith!  Thank you so much for visiting Written Butterfly with me today!  I read your blog about how “We Wander Far From Home” and I must say, it was quite a journey, eh?  Thank you for sharing!  (if anyone would like to read about this journey, here is Lilith’s link: http://lilithduvalier.weebly.com/blog/gearing-up-for-a-release-on-a-long-term-project)

Q) What tenacity dug into you to make you not give up on this story?

I think what made me determined to finish this story was the fact that I could keep coming back to it.

I understand that writing is more work than inspiration, but I’m a big fan of the path of least resistance as a writer. If I’m working on a project, and suddenly get excited about a new one, I’ll set the first project aside and write the new one until the spark gets fanned out, then go back to actually slogging on the first project. So at any given time, I have a primary project, and then 3 to 10 Works in Progress. Works in Progress get divided into two folders “Current Projects” and “Drafts”

“Current Projects” are things I’m actively working on. Usually the story that I intend to have done within two months, and the two stories I’m planning to work on after it.

“We Wander Far From Home”, or as it used to be called “The Western”, had it’s own folder and even though it never demanded a place in the “Current Projects” folder and I published 10 other books between starting and finishing it, it was always a story I could pull up and add something to. I never opened it up without writing at least a couple of paragraphs. It’s the only thing I’ve ever written that never got saved for the night without the word count having gone up.

I guess it’s just been the one thing that was always “in progress”, it just took way longer than average.

No. I only have bad habits that I’m trying to break. I need to stop being constantly distracted by Tumblr, I need to admit that I cannot work with the TV on, and I need to be better about being really into the story before I have a glass of wine while I write. I also need to take more nights off.

At the moment I spend pretty much every night watching Netflix and checking tumblr with a glass of wine on the table and a story open, slowly dropping words into it. I would be much more effective if I just poured some tea, listened to music and had a dedicated writing time a few days a week.

I am hard at work on “A Long Hard Summer” and “Counting Kisses” right now.

“A Long Hard Summer” is a cute comedy about two counselors at an all boy’s summer bible camp who spend the book, and the summer, desperately seeking a private place to have sex, but keep being thwarted by work schedules, administrative supervision, and the fact that the only even semi-private places on the camp grounds are where the cooks smoke pot.

I’m trying some style experiments for “Counting Kisses”. It might end up being a little weird. The essential plot is that two men, who have been best friends since child hood, hit extreme financial crises at the same time. They are so life-threateningly broke, that when a man at a bar offers them money to screw each other on camera, they accept. But one of the conditions is that they cannot kiss during filming.  The story becomes about all the times they haven’t kissed during their long and romantically charged friendship.
++++++++++++++++++++++++++++++++++++++++++++++++++

Intro
I am very excited for “We Wander Far From Home”! It’s my first full length novel, and I’m very proud of the way it combines a nuanced love story with an old fashioned western adventure. I started this story in 2009 with the intention of submitting it to an anthology call, but the deadline flew by before I figured out how to finish it. I stuck it in a folder and forgot about it for a little over a year. Then I started taking it out every few months, writing another chapter here, doing some edits there and putting it away again. It didn’t really come together until January this year and I’m thrilled to see it published by Evernight!

Blurb
A crack shot best gal, a former criminal lover, a sudden ejection from everything he's ever known, and the faintest taste of freedom. That's what drives Will Kearny out of the comfort of a normal life and out into the Nebraska wilderness. Soon, the sweet, quiet dairy farmer from Minnesota is robbing stage coaches, knocking over banks and running off into the mountains to celebrate in Henry Fitzpatrick's arms.  But winter's coming on, the stage coach routes are drying up, and the law is onto them. Life on the edge is the only way Will and Henry can be together, but life on the edge is short. Can forbidden love survive in a harsh world?

Excerpt
He shifted closer to Henry’s body under the covers and realized that they were both naked. Had he really been so exhausted last night that he didn’t remember undressing? Or possibly being undressed? He set a hand to Henry’s chest, tracing a line down to Henry’s flat, red nipple. The contrasts of Henry were astonishing. The hills and valleys of his chest and shoulders, the gentle touches of his rough hands.
This man was a criminal.
And between him and Annie, they had made Will one, too.
Memories sparked from last night. Henry’s hand wrapped around Will’s, tugging him patiently into this room. Henry’s stubbled chin pressed to his face in an affectionate good night kiss that Will had barely been conscious enough to return.
So. Sweet. Affectionate. Beautiful. His.
But a criminal.
Well, Will supposed, you couldn’t have everything. He pressed his body against Henry’s, closing the small, cautious gap between them, and kissed the other man. He slid his hands out of Henry’s and wrapped his arms around Henry’s back, running his fingers over the ridges of muscle there.
Henry began to kiss him back slowly, as though not quite woken from a dream, before his loose grip tightened and his hands began to wander up Will’s body.
“Morning,” Henry murmured.
“Afternoon, actually, I think,” Will replied.
“Mhm,” Henry responded disinterestedly as he resumed the kiss, sliding his tongue past Will’s lips like walking through an open door. He took control of the kiss. Eased his body on top of Will’s. Will sighed happily as he sunk down into the feather mattress under Henry’s solid weight. Despite Annie’s assurances that there were other men like him, Will hadn’t really let himself believe it until the night Henry kissed him in the barn, only weeks ago.
The way that Henry’s skin moved over Will’s, the heavy scent of him dominating Will’s senses, made it easier for Will to concentrate on his rewards rather than his sins.
Will reached up to take Henry’s arm in his hand.
Henry pulled away, caught Will’s hand and pushed it back down to the mattress. “Shhhh…lie back.”
Will watched as Henry’s hands ran over his chest. Down his stomach, palms flat and warm. He traced his fingers down into the grooves between Will’s hips and his groin, where the skin was soft and sensitive, unaccustomed to being touched.
Will pushed his hips up against Henry’s hands, asking for more. He’d been ready back in the cabin a few nights ago, he didn’t need all this careful touching.
Henry’s fingers slid back up his chest, rubbing and pinching his nipples.
Will felt his breathing getting heavier. His hips worked up against empty air. He looked down between Henry’s legs and swallowed. Henry’s cock was standing between his legs now, thick and flush and full.
And out of reach.
“Look at you,” Henry murmured, rolling the bud of Will’s nipple between his thumb and forefinger, every touch making the nerves more sensitive.
The sluggish warmth in Will’s belly started to coil, not urgent yet, but threatening to become so. “Henry, please.”
Henry grinned, and patted Will’s chest as though he was going to stop teasing. Then he dropped his mouth down to Will’s chest and took a reddened nipple into his mouth.
The warmth in Will’s stomach tightened suddenly. The steady hum of arousal in his body spiked. He dug his fingers into Henry’s shoulders and bucked his hips up against nothing when the grip made Henry suck harder.
Will reached for his cock while Henry rolled the bud between his teeth and flicked his tongue over it. Henry caught Will’s hand and brought it back up to his shoulders.
“Henry, I don’t wanna wait no more,” Will moaned as Henry let his nipple go with a loud, wet “pop.”
“Yeah,” Henry said. His voice was heavy and rough and his eyes were dark with lust. His gaze ran over Will’s body like another caress and Will shivered. “I won’t make you.”
Will’s breath caught.
Henry moved off his thighs, arranging himself so that he was kneeling between Will’s legs. He slipped his hands underneath Will’s knees, calloused hands tickling at the sensitive skin underneath the joint. Will felt too exposed as Henry lifted his feet up off the mattress and spread his legs wider, so wide that his toes poked over either side of the mattress.
Henry arched down, kissing Will. Will set his hands back to Henry’s shoulders, letting himself stay open under Henry’s increasingly insistent tongue, kissing back with everything he could muster while Henry turned the kiss dirty and breathtaking. He finally settled his body down against Will’s, pressing his rock hard cock into Will’s body, rubbing against him until Will moaned against his lips.
“No more interruptions. Door’s locked. Hell, I even jammed a chair under the handle.” He dropped his face to Will’s neck, sucking at a tendon, then worrying his teeth against it. “Even if the goddamn law comes knocking, even if they break down the door, I’m gonna make you come before they cart us away.