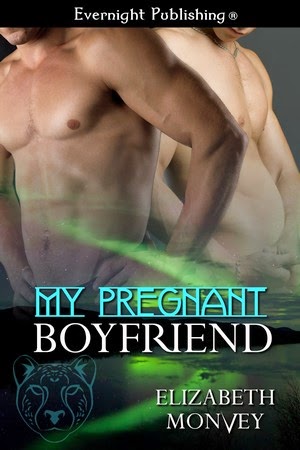 Thank you so much for letting me visit and talk about my new novella, My Pregnant Boyfriend.  My editor suggested that male pregnancy stories were popular but authors seemed to have a difficult time with writing such a story line, but being the outgoing, open minded person that I am I thought "Why not?"

Of course, I had to think a believable reason how a man might get pregnant.  I didn't even think of the alien way (my friend Jacey Holbrand came up with a fabulous story about that! Look out for Breeding Seth in January from Evernight.).  Instead, I turned to a shifter story, with the idea that nature always finds a way to survive.  Nature adapts, changes, so I thought, why wouldn't it do the same with animals?

I began to research extinct animal races and came across an interesting species called Homotherium.  They were a type of scimitar toothed cat (saber tooth) that died out abruptly about ten thousand years ago, about the same time that humans began to cultivate the land.  I thought that was an interesting coincidence.  Also, it's rare to find full skeletons of the cats.  My imagination soared.

I came up with Peter, on the run from a hunter, and the last of his kind.  Instead of fighting, he's learned to run and hide, but the hunter is relentless and hunts him almost to the point of death.  He's saved by Ethan, a cougar shifter, and the two find an instant attraction.

This book is part of the My Boyfriend Is... series.  They are all stand alone books, dealing with a man who finds out his partner/boyfriend is a supernatural creature.  There is My Werewolf Boyfriend, My Vampire Boyfriend, My Alien Boyfriend, this one, and one last one before the New Year comes ringing in.

Up next is My Ghostly Boyfriend, the last one in this series (for a while!).  I'm going to focus on a new series, a shifter/male pregnancy story line.

BLURB
Ethan Rushton can’t believe his eyes when he discovers the type of shifter of shifter he’s saved from a hunter.  The long incisors hanging out the mouth, the sloped hindquarters…it’s a saber tooth cat come to life.

Peter Neren’s been running his whole life.  For ten thousand years his species has been a secret but now he is the last of his kind.  He doesn’t know if he can trust Ethan, but he’s got to try because it’s time to take a stand.

Their attraction is instant, and once they act on their passions nature has found a way to ensure the survival of the species…leaving Peter pregnant.  He will do anything to protect his unborn cub, and so will Ethan, even if that means becoming bait to hunt down the man trying to kill them both.

The man was a little shorter than his own six foot, the muscles more streamlined which was probably from being on the run.  His hair was shaggy, the blonde locks almost white in the overhead light.  With a firm ass and nicely curved cock, Ethan fought the urge to drool.  Like the cat, he had pale blue eyes ringed with dark lashes.  Their gazes met in the mirror and as they stared at one another, something buzzed between them.  Ethan’s cougar pushed to the surface and he had the strangest urge to purr, which was extremely odd.  Cougars were solitary creatures, preferring to live wild on their home ranges.  It was one of the reasons why he moved deep into the Canadian Yukon.  There weren’t that many cougar shifters around.
He held out the clothes.  “I, ah, have some stuff you can wear.”
“I see that.”  Even his voice held a punch and Ethan’s cock took notice of the smooth baritone.  “My name is Peter.  Peter Neren.”
“Ethan.”
“Yeah,” Peter nodded.  “I remember.  Thank you…for what you did back there.”
“I scented you,” he admitted.  “I trailed you to make sure you stayed away from the human population.”
“Don’t worry.  As you can imagine, I have no desire to be around humans.”
Ethan pointed to the wound.  It wasn’t bleeding, and although it looked angry, the tissue around it was a healthy pink.  “Do you think you need to be stitched up?”
Peter shook his head.  “I healed a lot in my cat form.  Just bandages and some antibiotic cream should be fine.”
“In the medicine cabinet.”
“Thanks.”
The words died but the thick tension that hung between them didn’t dissipate one bit. Ethan couldn’t seem to drag his gaze off Peter…who currently stared at him as if he had a screw loose.  Maybe he did.  What else could account for the odd feelings coursing through him?
Peter bit his lip.  “Listen, I know you have questions, but could I answer them after I clean up?”
That snapped Ethan out of his daze.  “Christ, sorry.  I’m still a little shell shocked, I think.” Ethan slowly backed out the door.  “I’ll make us some dinner.
“Great.”
They continued to stare at one another.  Ethan had to mentally fight with himself to not look down at the sinfully delicious body in front of him.
“Anything else?” Peter asked him.
“Uh, no.  I’ll be in the kitchen.”
Peter walked toward him, and Ethan’s heart exploded with excitement.  Holy crap, was he about to get up close and personal with this exotic, and by exotic he meant extinct, shifter?  He stared at Peter’s mouth, wondering how soft those lips would feel under his.  Or wrapped around his cock.
Peter shut the door in his face.