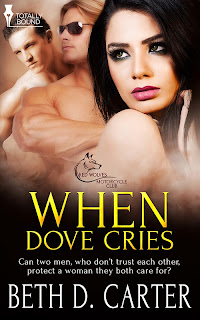 Cade wants more than anything to tell Draven that he wasn’t the one who killed his cousin, but he can’t reveal the truth so he has to live with Draven’s hate.  When the two men find a woman half dead and bound with zip ties, they both feel a need to protect her.

Dove Aldrin is a sensitive young woman who had been abducted and held prisoner for a long time.  When she escapes, she falls into the path of two men determined to help her and find the man responsible.  What she didn’t count on was falling for both of them.  How can she pick one over the other, especially when they can’t stand each other?

**Each book in the series is interracial menage.

Slowly, awareness fluttered back to Dove. First, there were noises. The gentle swish of the air conditioning. The hum of a machine. Then came the antiseptic cleanliness of the air. Finally, she felt the stiff bleached sheets tucked in around her. She cracked her eyelids. A white room and light green curtain. A hospital. It meant she was rescued. She was safe.
She shifted her gaze and saw her angel reclined in a chair next to the bed. His arms lay crossed over his massive chest and his booted feet were crossed at the ankles. His chin rested on his chest as he dozed, and she was afraid he was going to wake up with a painful crick.
Draven. Was that his first or last name?
She took a moment to study him, admiring his sandy blond hair that hung a little long over his collar. She vaguely remembered he had pretty blue eyes. He wore a black leather vest over a white T-shirt that looked as if it had seen better days. On the upper left-hand side, she read the name of his motorcycle club, The Red Wolves, and under that was a patch that said V. President. She didn’t know anything about motorcycle clubs or motorcycles in general. In fact, her father had warned her not to get too close to the rough men who lived the biker life. They were trouble, he’d said. Clearly, her father had been wrong, because this man sitting next to her bed was her angel, her savior, and she was going to stick by his side the rest of her life. If that meant living among bikers, so be it.
At that moment, the door opened and another biker walked in wearing black leather with a satchel that hung diagonally across his body. His leather vest had a patch that said Nomad. He was just as tall as her angel, although his body seemed a little suppler in its strength. Silver shot through his dark, cropped hair, and the puppy dog brown eyes that met her gaze made her belly quiver with attraction, even in her weakened state. He carried two cups of coffee and halted when he saw that she was awake. A small smile graced his lips, and a dimple popped up in his left cheek that softened his harsh countenance. She returned the smile and watched as he made his way to the other side of her bed where an empty chair waited. He set the coffees down upon the C-arm table that hugged the bed over her legs.
“Hello,” he whispered.
“Hello,” she whispered back.
“I’m Cadence, but call me Cade—Cade Vanaker. You probably don’t remember me, but I was there yesterday with John.”
“John?”
Cade nodded toward the sleeping man on the other side of her bed. “John Draven. What’s your name?”
“Dove Aldrin.”
“It’s nice to meet you, Dove, although it’s crappy circumstances.”
She flinched at the memories of the circumstances. “He won’t find me, will he? He won’t hurt me again?”
Cade slowly reached out and took her hand in his. He caressed the soft skin right above where the white gauze ended with his thumb. The soft attraction fluttering in her belly blossomed through the rest of her body.
“I promise you, he won’t hurt you again. He’s dead, Dove. That’s why you were forgotten in that shit hole.” 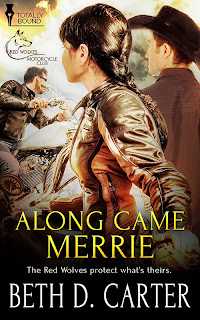 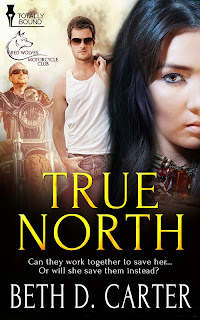