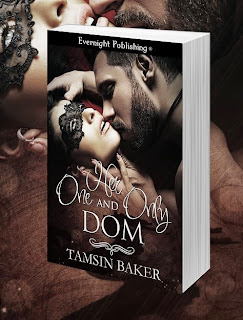 Hello Tamsin!  Thank you so much for visiting Written Butterfly with me today!

Hi Beth! Thanks so much for having me.

This story was originally written for an anthology call of Evernights for MF stories that were ‘strength vs innocence’ themed. I submitted it at 6500 words to have a reply saying to please redo and resubmit because the story deserved to be longer. It’s now over 24K so I’m pretty sure the editors were right J

A little bit I suppose. I try not to write about my own life or things I’ve experienced, but love, sex and human emotions are the common thread that draws us all together, so its impossible for me not to have put some of me in my books.

Personally I love Shannon West. She writes mostly m/m and I LOVE her werewolf series. Her characters are loveable, her world building believable and the sex… amazing!

Her one and only Dom
By Tamsin Baker

Blurb:
Simone graduated from university with three important things: her degree, her virginity still intact, and a case of unrequited love to make life complete. Her professor, Patrick Smythe is everything she wants in a man.

Patrick has never found a woman who can fulfil all of his needs in and out of the bedroom. Simone wants to be this woman, but can she succeed when they come from such different worlds?

Excerpt:
“Tell me more about why you haven’t dated before, Simone.”
She smiled and kept his gaze, no fear showing in her eyes. “I dated Patrick, a few people throughout high school and uni.”
Anger and a small amount of fear spread through his belly. She had lied to him? “You told me you didn’t.”
She chuckled softly and picked up a piece of garlic bread.
“I told you I was a virgin, and I was. I have barely let anyone do more than kiss me. So stop looking at me like that.”
Throwing in the towel so to speak, amazed at his lack of control with this woman, he poured more wine into his glass.
“I think I’m jealous that anyone has touched you.”
She laughed at that and he felt heat fill his cheeks. That would teach him for being honest.
She reached across the table, taking some of the sting out of her laugh with the squeeze of her hand on his.
“I didn’t mean to laugh honey, but seriously? You’ve probably slept with more people than you can count and you’re jealous just because I kissed a few guys?”
Patrick smiled, guilty as charged. “Are you telling me I’m being a hypocrite?”
She laughed again and ran her nails over the back of his hand.
“I love that you’re jealous. It means you care.”
Patrick turned his hand over and gripped her fingers. He instinctively knew that this was one of those defining moments in a relationship He’d never been jealous before, hadn’t cared about anyone enough to be upset when they moved on. This was very different. “I do care Simone. You are amazing.”
She drew back and he instantly wanted her hand back in his.
“So you’ll teach me more about the subby stuff?”
Patrick laughed, he couldn’t help it. She made it sound so basic.
“Yes, I’ll teach you everything. What I need, how to please me.”
Her eyes sparked and her mouth flattened into a straight line. Oh how he was going to love teaching her.
“And in return I will give you more pleasure and make you feel treasured beyond your wildest dreams.”
Something changed inside her eyes when he said that and the frown disappeared to be replaced by a shy smile. “But you’ll go easy on me to start with?”
Patrick nodded, serious now. “It’s my job to push your limits, but you always need to feel safe. If you say stop, we stop, that never changes.”
Their dinner arrived and Patrick ate his steak while Simone enjoyed her risotto.
They finished the wine and Patrick called the waiter over. “Dessert?”
Simone shook her head and held her belly. “No thank you, I’m so full.”
He placed some cash in the leather binder containing the bill and smiled as wickedly as possible. He would be fine to drive, though handling a flogger may be a problem. “Home then?”
She nodded and stood, swaying gently on her small heels.
He tucked her into his arm and led her to the car. When he opened the door she fell into it, giggling away. He shook his head, but couldn’t wipe the smile off his face.
Once he had the car started and they were driving back to his home, he asked her, “You didn’t have that much to drink. Why are you giggling so much?”
She slid her hand over his thigh, a little too close to his aching cock.
“I’m just happy, Patrick, and it feels so good to laugh.”
Almost home, almost home. “Well, I’m sure I can make you feel better.”
Her hand stilled and he looked over at her quickly, she was worried about something.
“What’s wrong, babe?”
Simone slid her hand up to his crotch and stroked the flesh that was rapidly hardening. “Actually, I’m sore. Like really sore. Could you teach me some things I could do to pleasure you?”
Visions of Simone on her knees swam into Patrick’s vision and he groaned as blood flooded his groin. “Oh, I can think of a thing or two I can teach you that will give your sore bits a rest.”
“How about you drive me home and you teach me in the car?”
Though Patrick’s heart rate sped up at the idea, his eyebrows furrowed into a frown. “I like to be comfortable, Simone, and you should be too.”
She giggled and began to unbuckle his leather belt. “Oh, please, Patrick. I’ve always been such a good girl and never fooled around with anyone. Please?”
Well, how was he going to say no to that? He nodded and released a groan as she released his belt and unzipped him, his eager cock pulsing with pleasure as it sprang from its confines.

**Congrats to Vanessa for winning my Merry May Blog Hop!!!
Posted by Beth D. Carter at 3:44 PM