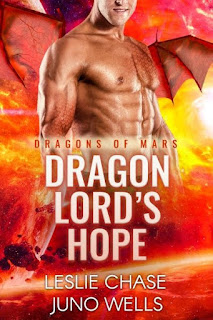 Hello Leslie!  Thank you so much for visiting Written Butterfly with me today!  It’s such a pleasure to chat with you.  So tell me…

It is! Dragon Lord’s Hope is book four of the Dragons of Mars series that I’m writing with Juno Wells. As the name suggests, the books are set on Mars where dragon shifting aliens have been hibernating for a thousand years. The first book, Dragon Prince’s Mate, was the story of how a human colonist woke them – and found that their leader was her fated mate!

Each of the books is about one of the dragon shifters, who are the last survivors of their civilization, finding their mate from amongst the human settlers on Mars.

Before I settle down to write, I stretch out, take some deep breaths, and try to calm my mind. Just let the story float around until it comes pouring out of my fingers and onto the page. At least that’s the theory, it often takes a lot more effort than that!

I try to plan everything ahead of time, but they always surprise me! In the end, I usually have to rewrite a lot of the early dialogue because of how the characters have changed as I got to know them.

Right now I’m working on a new, stand alone novel called Stolen for the Alien Prince. After that it’s back to the Dragons of Mars for the as-yet-unnamed book five with Juno.

Did he rescue me, or did I save him? Either way, he's trouble - big, sexy, dragon shifter trouble!

Gillian Willis isn't having an easy time running an ice farm at the Martian north pole. Her father's missing, the bank is breathing down her neck, and now dragons are attacking! If it wasn't for one gorgeous dragon shifter who puts himself between her and harm, she'd be in real trouble.

He's the sexiest man she's ever met, and the bravest. That's the good news. The bad news is that he claims to own the land her family's farm is built on. Even though he nearly got himself killed saving her from the other dragons, Gillian isn't sure she can trust him. But does she have a choice?

Zardan, Dragon Lord of Herendar, has nothing left to live for. All his lands, his family, everything he knew and loved was buried a thousand years ago when the Dragon Empire fell. It's almost too much to bear - until Gillian drags him off the ice and he realizes that she is his mate.

It should be impossible, it defies his understanding, but it's true. The feisty human female is his and he won't allow any harm to come to her. Will that be enough to rekindle the fire in his heart? Can he convince Gillian that they belong together? Or will the gulf between human and dragon shifter be too large for any sacrifice to bridge?

DRAGON LORD’S HOPE is BOOK 4 of the DRAGONS OF MARS. You don't have to read them in order, but it will be a richer experience if you do!

No cheating, no cliffhanger - just a steamy dragon shifter science fiction romance with a happy ever after!

Bio: Leslie Chase is an author from Scotland, whose reading habit has turned into a writing one. She

When not writing, she's busy thinking about what to write next or researching it - yes, damn it, looking at castles and swords and pictures of spaceships counts as research.
loves writing, and especially enjoys writing sexy romance. It lets her imagination run free and her ideas come to life! She's done a lot of things in her life, from working with the elderly to studying sword fighting to teaching tai chi. And, always, reading reading reading! 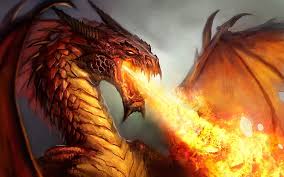