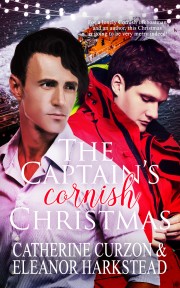 For a lonely Cornish lifeboatman and an author who’s more used to crime scenes than love scenes, this Christmas is going to be very merry indeed!


When Jago Treherne agrees to man the Polneath lifeboats one snowy Christmas, he knows he can forget turkey and all the trimmings.


Yet when he boards a seemingly empty yacht and stumbles upon sexy Sam Coryton enjoying an energetic afternoon below decks, Jago soon realizes that he might be unwrapping a very different sort of Christmas gift this year!


Publisher's Note: This book is related to the Captivating Captains series.


Jago frowned as he heard the weather warning come in over the radio. It was the last thing he needed on Christmas Eve.
He barely noticed the cold sting of the sea spray striking his face as he powered the rescue boat over the waves. There hadn’t been an SOS, but he had left Polneath harbor anyway. Sam Coryton and his yacht, Morveren, hadn’t returned to the marina, and with bad weather moving in and little daylight left, Jago knew he would have to go out to find him.

No response on the radio. No distress flares sighted.


Jago kept his grip firm on the wheel, his jaw set with determination.
He rounded the rocky headland, so beautiful and yet, he knew only too well, so dangerous—and he saw it. The white hull and sails of the Morveren. And it appeared to be in distress. The yacht rocked from side to side in the water, the depths already boiling in anticipation of the oncoming storm. In the windows of the vessel bright Christmas lights twinkled merrily, but there was no other sign of life, no indication that Polneath’s favorite son was anywhere on board.


A chill ran through Jago’s blood as he steered closer to the yacht, and it wasn’t just at the thought of what this oceangoing Maserati must have cost. No man with an ounce of sense in his head would be so stupid as to still be out here now in the dying hours of the Christmas Eve daylight, with the maelstrom somewhere on the horizon. He remembered from summer Sam’s bad habit of swimming alone from the deck of his yacht, but surely he wouldn’t be so stupid as to do it in the depths of winter?
Even Sam Coryton wouldn’t be so idiotic as that.


Jago pulled up alongside the yacht and let the engine idle. He called over the sound of the waves and the seabirds, “Sam! Sam Coryton—it’s Captain Treherne. Are you there, Sam? Can you hear me?”
He paused, but heard no reply. There was no sign of anyone in the water, and Jago wondered if Sam had been taken ill, alone in a cabin on the yacht. “I’m coming aboard!”

Jago lashed the rescue boat to the Morveren, then heaved himself onto the deck. His boots squeaked as he crept along the deserted craft.


“Where the bloody hell is he?” Jago muttered to himself as he lifted the hatch on the companionway and stared down into the vessel. The Christmas lights were the only illumination in the stairwell, but from beneath he could hear the gentle strains of light classical music and smell fresh coffee, suggesting that someone was or, in the worst-case scenario had been, aboard until recently.
Jago called Sam’s name again, carefully descending the stairs into the yacht’s living quarters. He had seen some impressive vessels in his day and this was certainly high among them, a sleek craft from the outside and a comfortable home within. The hallway that stretched ahead of him was brightly lit, the walls decorated with enormous canvases showing cheery riots of color, but that made the scene feel somehow even more uneasy. There was something in the air, an indefinable tension that fired Jago’s instincts as he looked in on the rooms and found nothing out of the ordinary, but no sign of the man who had sailed this vessel from the safety of the harbor.


Where was Sam Coryton, successful crime author? Surely this wasn’t one of Sam’s thrillers come to life? Would Jago pull open a door and find—no, he couldn’t bear to think of that. Not on his watch, not Polneath’s famous boy.
“Sam? Can you hear me?”


He shouldn’t have thought of Sam’s thrillers. Now Jago was thinking of the bright Cornish villages with their casts of colorful locals and the violence just beneath the surface, of murder and—this was just the sort of plot Sam Coryton would come up with—Christmas lights on a floating yacht with a gory surprise lurking somewhere within.
Only one set of double doors remained in the living quarters now and they stood, as they would in a murder mystery, right at the end of the hallway ahead of Jago. He hadn’t seen a master bedroom so this must be it. Despite himself the lifeboat captain, sturdy, brave, fearless, paused with his hands on the door handles. He drew in a deep breath, told himself he had seen worse than a dead author and pushed the doors open.


Jago had only time to see a brief impression—a figure, sprawled across a bed. A naked body. Was this the work of some depraved psychopath? “Bloody hell, no—Sam!"


Eleanor Harkstead likes to dash about in nineteenth-century costume, in bonnet or cravat as the mood takes her. She can occasionally be found wandering old graveyards. Eleanor is very fond of chocolate, wine, tweed waistcoats and nice pens. Her large collection of vintage hats would rival Hedda Hopper's.

Originally from the south-east of England, Eleanor now lives somewhere in the Midlands with a large ginger cat who resembles a Viking.


Catherine Curzon  is a royal historian who writes on all matters of 18th century. Her work has been featured on many platforms and Catherine has also spoken at various venues including the Royal Pavilion, Brighton, and Dr Johnson’s House.
Catherine holds a Master’s degree in Film and when not dodging the furies of the guillotine, writes fiction set deep in the underbelly of Georgian London.

She lives in Yorkshire atop a ludicrously steep hill.