Q&A with the Awesome Arabella Sheen on her New Release! 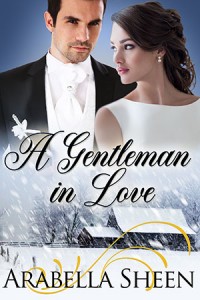 Beth - It’s great to be on your blog and thanks for having me. I hope our readers and followers enjoy the Q&A’s and perhaps discover a few things about writing steamy romance novels along the way.

So, about my latest #hot #steamy romance…

There were a couple of factors that inspired the writing of A Gentleman in Love.

One was a visit to the United Kingdom’s buzzing capital, London, where classical ‘old’ buildings such as the beautiful Palace of Westminster and the Foreign & Commonwealth Office are situated. Another creative trigger was a desire to write a Christmas romance.

Domestic and foreign diplomatic scandals have hit the news headlines recently, and the urge to delve deeper and create a fictitious world involving an embassy, an ambassador, and a political protocol gone wrong intrigued me.

A Gentleman in Love follows the sizzling romance of Shelby and Sam as they come to terms with the problems they face and the unexpected passion they feel for one another. Shelby wishes to clear her father’s name of political blame and Sam needs a wife to secure the adoption of his ward - Nicola. The question is: can Sam and Shelby join forces and help one another achieve their goals?

As for Christmas, well, who doesn’t love a steamy Christmas romance?

Do you plan all your characters out before you start a story or do they develop as you write?

Firstly, there has to be a solid inspiration for a story. If there is a ‘topic’ or an ‘idea’ or a ‘social problem’ I’d like to write about, I work on the story and then find characters to fit the brief.

One of my books - Temporary Bride - is about a mother having to rank and prioritize the emotional and family needs of her child over her own desires. Amy has to deal with Max, her ex-partner. He’s a strong, dominant, alfa billionaire male – while she has a softer side to her. Of course there are clashes, but it’s a great love story.

In - A Gentleman in Love – the story is more about making compromises in a relationship. Shelby Chesterfield doesn’t take ‘NO’ for an answer and Sam Hardwick, an ambassador used to making all the decisions, has to bend to her will on occasions.

My characters tend to develop their strengths and weaknesses as the story unfolds. This often leads me into trouble when writing what is supposed to be a basic love scene – all passion and sex (in the bedroom – or wherever!) when there is emotional ‘blow hot/cold’ conflict just around the corner.

Do you have a favorite line or scene in your book?

There was a bit of a tug on my heart strings when Sam happened to follow Shelby and his goddaughter – Nicola – whilst walking and exercising the dogs in the woods.

Unaware Sam was listening to their conversation; Shelby was busy explaining to Nicola that Sam was doing all in his power to adopt her – it was just red-tape and the slow pace of the authorities that was causing a delay. Not Sam’s reluctance to adopt.

At this moment, when Sam discovered Shelby had his back and was supporting him, I suddenly realized how supportive (and loving) I’d made Shelby. It was a sweet ‘aww’ moment that made me sigh and give a smile of contentment.

What’s your favorite thing about being an author/writer?

Apart from the fact I can escape into a contemporary or historical ‘fantasy’ world of my own making, and no matter what problems and conflicts I throw at my heroes and heroines, somehow, by the end of the novel their turbulent worlds are always made whole…and there’s a happy-ever-after.

If only I had a magic wand to sort out the real world!

Do you have anything you would like to say to your current readers or to those that haven't yet read your work(s)?

On a more serious note, I’d like readers to have as much enjoyment reading my Contemporary and Historical novels as I’ve had when researching and writing them.

What future projects are on the horizon for you?

I’m in the throes of writing a sensual/erotic Regency series. They are short, hot romance stories – just right for bedtime reading beneath the covers.

Two books are with my publisher and a third has been ‘paused’ on Chapter One whilst I tackle my side of marketing and promotion for A Gentleman in Love. 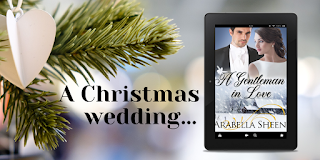 Beth, thanks so much for hosting me on your Written Butterfly blog and I hope your readers enjoyed discovering a bit more about my latest Beachwalk Press release – A Gentleman in Love.

Book Blurb   A Gentleman in Love   by  Arabella Sheen

A Christmas wedding and a growing passion. Will a political scandal destroy their love?

Desperate to exonerate her family name of any wrongdoing, Shelby Chesterfield gate-crashes the Foreign Office Christmas party to ask her father’s accuser for help. When Ambassador Samuel Hardwick refuses to cooperate, Shelby is determined to ruin his diplomatic career any way she can, and a chance to do so arrives sooner than she expected.

Caught in a passionate embrace, Shelby puts Sam on the spot and tells journalists they’re engaged. But her plan backfires when Sam turns the tables on her.

Sam wants no commitment to anything or anyone except his career. But when his best friends are killed in a violent terrorist attack, leaving their daughter orphaned and in his care, he has the daunting task of finding a wife and substitute mother, or he will risk losing his newly acquired ward into the foster care system. With time running out, when Shelby asks for help to clear her father’s name in a political scandal, Sam offers support in exchange for a Christmas wedding.

The trouble is…Shelby knows about his ongoing affair with Lady Donna Ruston.

Can Shelby and Sam work together to achieve their goals, or is their winter romance fated to fail before it’s begun? 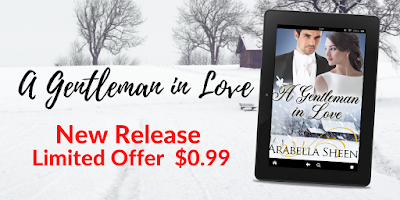 Arabella Sheen is a British author of Contemporary and Regency sensual romance. Published with Beachwalk Press, she is also a member of The Romantic Novelists’ Association.

One of the many things Arabella loves to do is to read, and when she’s not reading or writing romance novels, she is either on her allotment sowing and planting with the seasons or she can be found curled on the sofa pandering to the demands of her attention-seeking cat.

Having worked and lived in the city of Amsterdam in the Netherlands for nearly twenty years, she now lives in the South West of England with her family.

Arabella keeps in touch with her readers on: