This is the song that made me fall in love with the band Skillet.

If you don't know who Skillet is, it's a rock 'n roll Christian band, with alternating vocals between lead singer John Cooper and drummer Jen Ledger. I've used some of their other songs for plot inspiration, but I'll talk about those when it's time.

I appreciate music in all forms, more some than others. Now, there is the interpretation by the artist, and then there is my own interpretation. For many of my books, I find songs that speak to me. This song inspired my book "In A Chord".  A chord of music is three or more notes heard simultaneously, and I thought it a perfect title for my ménage book.

When I heard the violin and Jen Ledger sing her chorus in Awake & Alive, I immediately envisioned this pink haired girl sashay her way across the stage. From that mental picture, I developed the story: 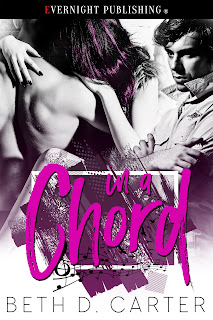 Keaton Gates and Ashland Lance are lovers and musicians in a band called Endymion.  Keaton believes there is something missing, not only from the sound of their music, but also in their lives.  When he hears Momo Willows singing Endymion’s signature song, he knows she’s the muse he’s been waiting for.

At first, Ash Lance is jealous of the new girl in Keaton’s life until he meets her.  Momo is unlike anyone he’s ever met and they soon discover that they connect on many levels.  But he’s reluctant to take her away from Keaton just as Momo refuses to come between them.

Keaton is quick to assure them he wants all three of them to learn to be in a ménage relationship, but as they learn how to live and love together, another threat is moving between them, threatening to take Momo away….forever.