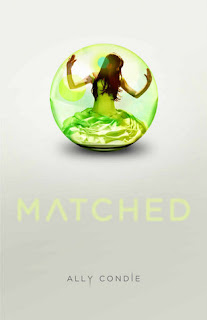 The reviews of this book has it being a ripoff from the novel “The Giver” by Lois Lowry, and even though there is a lot of similarities, the tone and feel of “Matched” is completely unique.

“Matched” is the story of Cassia, a girl who has grown up in a society that is ruled by the Officials, where everything is based on calculations. Officials calculate who would be each other’s perfect husband, what job is best suited to whom, even when is the best age to die. Because of their perfect analysis of humans, disease is completely wiped away, crime no longer exists, and everyone is well provided for.

Except, of course, if you break the rules. They you could be cited, given an Infraction, and if you get too many you might be labeled an Aberration and thus unable to be matched and given a low standing labor job.

In this world, the Officials have done away with writing, art, poetry, music, everything that invokes free thinking and feeling. In this society, emotions are regulated as well as love.

Cassia is matched to her best friend Xander, but as she looks at his datacard, another face pops up as well, another boy named Ky. Confused, because the Officials are not to supposed to make any mistakes, Cassia begins to look at Ky differently, to learn about him, and discovers he holds many secrets. He can write, he has stories to tell, and is labeled an Aberration, unable to become a full citizen because his father was a fighter in the Outer Provinces.

But these two people defy the odds and fall in love. They risk their freedom and lives to be together. And when Ky is taken away because of that love, then Cassia vows to find him. She rebels against what she has known her whole life in order to love Ky.

This novel lingers with you for several reasons. First, the writing is engaging, thought provoking. There isn’t a lot of action in this story, mostly it weaves through Cassia’s journey from being totally in support of The Officials and Society to realizing that love is worth any risk, any price. Second, while this book is like other dystopian works, Ally Condie has really brought her characters to life. The love between Ky and Cassia is real; it’s almost heartbreaking at times. But her relationships with others around her is equally engaging.

“Matched” is the first book in a trilogy so, while the ending is satisfying for now, Cassia’s story is not done and I look forward to reading her journey.
Posted by Beth D. Carter at 6:22 AM