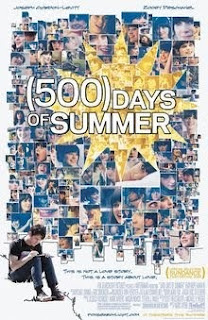 This movie, (500) Days of Summer stars Joseph Gordon-Levitt and Zooey Deschanel. I had initially been made aware of this little Indie film because Joseph Gordon-Levitt had been nominated by the Golden Globes for Best Actor in a musical or comedy. He had been a child actor on “3rd Rock From the Sun”, one of my favorite comedies of the ninety’s. Zooey Deschanel is the sister of Emily Deschanel who stars in the tv show “Bones”, and has appeared in many films such as The Hitchhikers Guide to the Galaxy and The Happening.

The heart of this story lies in the theory that even though you might find Mr. or Miss Right, it may not be a mutual discovery. Tom (Gordon-Levitt) works as a greeting card writer, who falls instantly in love with his boss’s new assistant Summer (Deschanel). And from the very beginning we are told that although this is a romance story, it I is not a love story. But I disagree, but it does teach us about love, only a different version of it.

Throughout the film, the timeline of where Tom and Summer are in their relationship flashes up to propel us along their journey. Tom is one of those romantic, wear-your-heart-on the-sleeve kind of guys and Gordon-Levitt has played him so well and convincingly that-in my mind-he is now propelled into Hottie status. Summer is a little harder to figure out. She is a woman looking for her own true love even though she tries to deny it by saying she doesn’t want to put labels on what she and Tom share.

But this story is really about Tom. In the 500 days that they have together, he runs the gamut of every facet that Love can be. Joy, hope, passion, despair, reconciliation, anger, and finally, acceptance.

Every shot and frame of this film is artistic. The director, Marc Webb, has done a fantastic job bringing each segment of this film to emotional life. It is one reason I like Indie films, because I always get done watching them with the moral or tale replaying through my head.

I won’t give anything away, but the ending, though not the happy ending one might expect, is satisfying. Tom does find his closure. And in turn leaves us realizing that the heart truly is big enough to hold all types of loves and loss.
Posted by Beth D. Carter at 8:13 PM