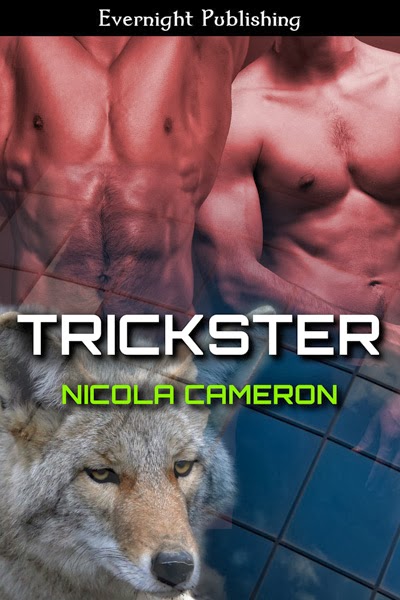 Thanks for letting me come on your blog today! Trickster is my first M/M shifter story, and was originally intended to be a short story submission for Evernight’s Alpha’s Claim: Manlove Edition anthology. Obviously that didn’t happen, which is good because this really needed to be a longer story. For more background on the plot, let’s turn to Mark Fellowes, the human half of this pairing.

Q: Mark, you’ve never been interested in men before, AND you had no idea that shifters existed. Your life literally changed in one day -- how did you feel about that?

A: Shocked out of my gourd, to be honest. When Delaney first tried to kiss me in the office, I have to admit that my initial reaction was anger, because up until that moment we’d been having a great conversation. I was so damn happy that he seemed to be a down-to-earth manager who knew when to trust his people (unlike some micromanaging dictators I’ve worked for). When he leaned over the desk for the kiss, I felt betrayed, like he’d been playing me just to get close.

Unfortunately, I couldn’t stop thinking about him for the rest of the day. Yeah, I was pissed off at him, but underneath that was something I’d never felt before. I didn’t understand until later that it was the mating instinct -- it’s like being OCD, but in a good way that ends up with orgasms. Luckily I’m not homophobic, otherwise it might’ve taken me a lot longer to get with the program. I still like women, but Delaney -- well, to paraphrase Tony Stark, he completes me.

As for Del being a shifter, well, he had to show me before I believed it. I’m still trying to get a handle on it all, but you know what? It’s also pretty damned cool. Remember, I’m a geek -- to me, having a boyfriend who can shapeshift is like living in a real-life superhero story.

BLURB:
Delaney Smith, coyote shifter and Trickster Technologies executive, thinks humans are bland, boring, and undateable. So he gets the shock of his life when he comes back from vacation and scents his mate in the Trickster offices — a mate who is not only male, but quite human.

Mark Fellowes is taken aback when the CTO at his new contract job makes a pass at him, and even more surprised at his temptation to respond. Straight and dating a career-minded businesswoman, he’s never even thought about kissing another man — until now.

When Mark is attacked by thieves trying to steal company files, Delaney must put aside his preconceptions to protect his mate. But will a criminal bent on destroying Trickster Tech separate them before he can stake his claim?

Delaney cleared his throat. Mark yelped and spun, bumping into the dresser next to the bed. The towel around his waist started to slip, and Delaney caught a glimpse of pale, muscled hip before he yanked the terrycloth back into place.

Panting, he glared at Delaney. “Jesus Christ, what is wrong with you?” he yelled. “Do you even know how to knock?”

“I did,” Delaney said, trying to sound innocent. “You didn’t answer so I got worried. Didn’t know you were in the shower until I came in here.” And you were coming in there.

Without his glasses, Mark’s resemblance to a furious faun was even more striking. “God. I do not need any more of this tonight,” he growled.

“You, sneaking around and following me everywhere.” He scowled at Delaney’s groin. “Especially with another fucking hard on.”

For some reason, that cheered the shifter. “You noticed, huh?”

“Helen Keller would have noticed it, all right? Does it ever go down?”

“Not since this morning. I can’t help it, babe. I smell you and I get wood.”

“Oh, Jesus.” Mark edged next to the bed, clutching both towels now and looking hunted. “Look, I’m tired. I just want to put on some pajamas and crash, all right? I’ve had a really bad, weird day, so how about we can talk about shapeshifters and," he waved vaguely between them, "that other thing in the morning.”

Delaney ignored the slap of disappointment and nodded. “Okay. We’ll talk later when you’re not tired.”

Although you weren’t too tired to jerk off in the shower.

Mark’s cheeks blazed to life. “You listened to me?”

Oh, shit, he can hear my thoughts already? “I didn’t mean to, but coyotes have really good hearing,” Delaney said defensively. “At least you got off. My balls are aching so much I can barely walk straight.”

“So go to your own damn bathroom and rub one out there!”

“Well, I’m not a shifter,” Mark snapped, “so you’re just going to have to explain it to the stupid human.”

“I -- Jesus.” Delaney sucked in a deep breath, forcing himself to calm down and find the right words. “Being drawn to a mate, it isn’t just physical. It’s emotional and spiritual as well.” He gestured at his groin. “Yes, I want to fuck you. That’s pretty damn obvious. I also want to know you. I want to talk to you, find out everything about you—where you grew up, what your family’s like, whether you like sports, what your favorite food is, your opinion on Steven Moffat, what you want to do with the rest of your life, all that. And I want you to get to know me, too.”