Book Review - Hells Vipers MC: You Belong To Me 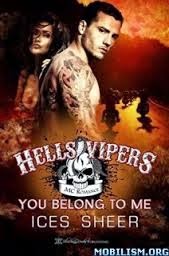 Hells Vipers MC: You Belong To Me
by Ices Sheer

With the market being flooded with motorcycle club romances, it’s hard to find one voice that stands out.  I was sent a copy of You Belong To Me for an honest opinion for my blog and I must say, I have a new author to look out for!

Ices Sheer, or Jordan Abbott, has written a very entertaining book.  It had action, sex, a plot…It was well written, fast paced, and I really liked Nuke and Jasmine as a couple.  The fact that she is black and he’s white was a nice touch to the MC 1% world.

There were only two things that I struggled with, one being the beginning.  I, at first, was confused who the book was about because we get this incredible amount of backstory for another couple, Cindy and Kevin.  And when Jasmine was introduced, it felt as if she was almost an afterthought.

The second thing I thought could’ve used expanding was the progression of Nuke finding out that Jasmine liked kink.  The first time they’re together she has all these misgivings about herself, her body, and the fact that he’s a biker, then a few weeks go by, and BAM! Nuke tells his friends she like figging.  I would’ve LOVED to read that scene.

However, these two incidence in no way distracts from how much I enjoyed this book, because as soon as Nuke and Jasmine begin to get it on, the story takes off like a bullet.  There’s a rat in the HVMC and that rat is putting people in danger.  The way the tension increases made this a page turner for me and I had to read it all in one sitting.  I believe this is supposed to be the beginning of a series, and the way it abruptly ends (while VERY satisfying) does leave it open for another book to sneak in.  Maybe Kevin’s story????  (hint hint)

I love crazy characters and Nuke definitely fits that bill.  He's awesome, and different for an alpha type hero.  Be warned: there's some hard core punishment in this book that might make feminists slap their e-reader down in anger.

The Hells Vipers have a rat. Someone is giving out personal information to a rival club, and the rivalry has now turned deadly. Not only are club members being targeted; their families are in the cross-hairs as well.

Nuke, the Road Captain for the Hells Vipers, has a reputation for being a little crazy and a force to be reckoned with. At 6'3" he's a blonde, tatooed, muscular fighting machine that does what he wants when he wants, and he only wants two things: to find the snitch and possess Jasmine's heart, body and soul.

Jasmine Simmons is a nurse who gets caught up in the chaotic world of the Hells Vipers after doing a friend a favor. She's never met anyone like Nuke before, and she starts to find him irresistible.

Jordan Abbot is an author of many talents. She has written paranormal romances, fantasy erotica under several different pen names. Along with several other short stories which she posted online.

Hells Vipers; You Belong to Me is the first in a series of gritty MC Romance novels.

She loves to write about bad boys and motorcycles. You will not find a billionaire in her novels but you will find the loveable bad boy that will probably steal the billionaires’ money and take his woman.

In the rare times that she isn’t writing from her home in Indiana. She likes listening to classic rock, watching movies and British Television.