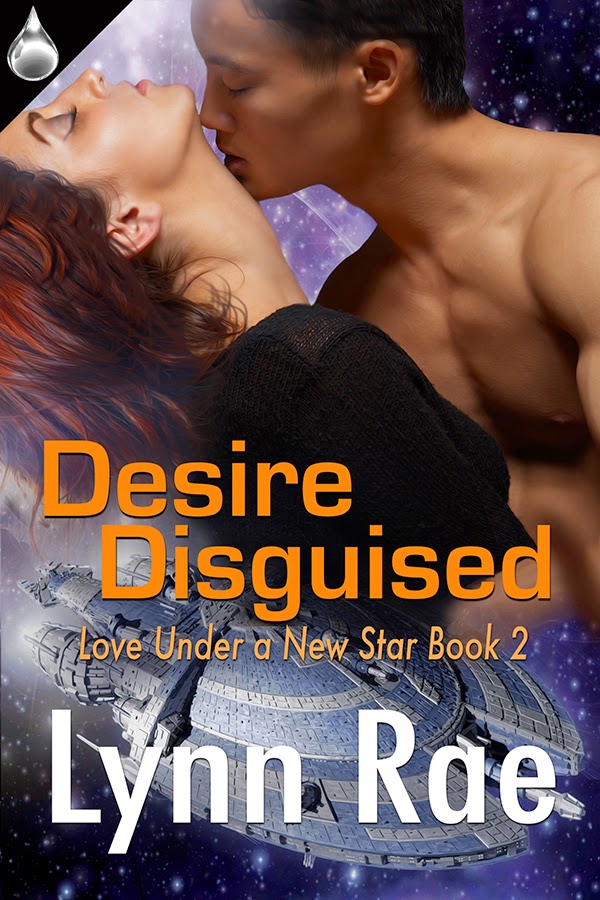 Thanks for hosting me!

My hero in Desire Disguised, Security Chief Ben Zashi, appeared in the first book of my Love Under a New Star series and in his quiet way let me know he’d like to find his true love, so I had to oblige. I decided to make things difficult for him by introducing him to a heroine who is even more private and withdrawn than he was, so he had his work cut out for him. Cara Belasco, my heroine, has good reason to keep to herself since she’s been on the run with her little brother since she was eight. When she arrives on his planet, he’s very suspicious of her cover story and initially approaches her as a law enforcement officer who needs to know if she poses a threat to the community he’s sworn to protect. As he gets to know her, a more personal interest takes hold. For her part, Cara has to learn to trust a new person which is very out of character for her. Both Cara and Ben have to really grow as people in order to overcome all the barriers between them.

I’m in the mood to write whenever the house is quiet! I’m a stay at home mom to a very precocious seven year old so I live with constant noise and interruption. Every peaceful moment sees me at the computer typing as fast as I can. If I have the luxury of a couple of hours to myself, I like to make a pot of tea to keep me refreshed as I write. I don’t really listen to much music or snack when I write, nor do I like to venture out to coffee shops or gathering places.

Bilbo Baggins, of course! I’d love to visit the Shire and stop by Bag End for tea, biscuits, and cheese and listen to all of Bilbo’s stories. I admire the way he wrote The Hobbit and the chance to get some great anecdotes about dwarves, elves, wizards, and dreadful orcs and goblins would certainly inspire a couple of fantasy books for me. Bilbo would likely be very red-faced if he read any of my steamier scenes, so I doubt I’d ask if he’d like to be a critique partner.

I have another small town contemporary coming out with Liquid Silver hopefully by the end of March. It’s the story of a school bus driver and a movie star and how they meet and fall and love. I’m also working on completing a couple of sci-fi erotic romances under my other pen name, J. J. Lore and I will hopefully self-publish a title in 2015 too. I’m also working on writing a short naughty fairy tale and it’s been great fun so far. That’s all I have planned for the first quarter of the year, after that, who knows what I’ll come up with?

Blurb:
Cara Belasco has been on the run from assassins since childhood. Living in the shadows with her younger brother and one elderly guardian, her luck nearly runs out when the smuggler’s ship carrying them crashes into a soggy jungle planet.
Ben Zashi, the stalwart head of security who rescued her from the wreckage, is very curious about her cover story, and Cara has to fend off his inquires as well as her escalating attraction for him. Will the secrets she’s been hiding come between them, or can Cara allow herself to find passion with the one man who longs to protect her?

Excerpt:
Cara followed at a jog, or tried to for a few paces until a broad chest appeared in her line of sight, blocking her view of the doorway. Ben Zashi. She’d forgotten about him for a few minutes, which was a first during her time on Gamaliel. He held up both hands and tilted his head, his eyebrow quirked in an inquiring fashion.
“What? Move, I need to go—”
“Actually it would be better if you waited.” He directed her to stand by his door and she did, too shocked by his interference to protest. He walked into their suite of rooms, and she heard his low voice, too indistinct to make out any words. Mat replied a few times and Ben returned, closing the door behind him.
“What are you doing? I need to get in there and—”
“No, you need to get in here unless you want everyone in the building to hear this,” Ben commanded, and a flicker of something close to fear wrapped in a thrill fluttered in her chest.
He jerked his chin at the door behind her, and she turned and entered his rooms. She’d never been inside. The layout seemed to mirror their suite, but she was too unsettled to take notice of more than a piano and a blue sofa. Whirling around as soon as she heard the door close, she found she was face to face with an unsmiling man.
“Give yourself a minute, Cara.”
She shook her head. “No, let me out of here. I need to talk with him.” She’d just found Mat, and this man was going to keep her from him. Unacceptable.
She tried to dodge around him, but he was too quick, flinging out an arm to block one side of the hall, and then the other when she tried it again. Her frustration built up in her chest, and she found it hard to take a deep breath. Ben’s dark eyes never left hers as he talked.
“Listen. You’re upset. He’s upset. Take a breather before you see him. He’s safe in there, and he’s not going anywhere tonight.”
“How do you know that? He just disappeared—”
“No, he went to a new friend’s house and thought he’d have time to get back here before you returned. The school routine is new for him, and he just forgot to check his datpad. Cara, listen, he’s just being a kid, don’t be so hard on him—”
The anger popped in her head in a burst of red light, and all the years of fear, the stress that never let up fueled her rage as she lifted her hands fully intending to shove at Ben’s broad chest with all her might. “You don’t know what you’re talking about. I have to be hard on him or he’ll—we’ll die.”
Her strength failed her as soon as she touched him, and her arms gave out before she could actually push. Ben pulled her in as she fell against him. “Nobody died.”
“But we will,” Cara muttered into his chest as his arms wrapped tightly around her. She wasn’t going to be able to do this on her own. Two men had already died protecting them, and Soren was nearly dead. That left her, a naïve woman with no experience or skills.
“Not on my watch.”
“I can’t do this.” Cara shivered into the comfortable warmth of Ben and tried to talk herself into some courage. She had to do it, there was no one else. But she’d already lost Mat once in the few days she’d been responsible.
Something moving against her hair distracted her. Ben’s grip on her loosened, and with an unexpected ache, she realized he was going to let her go. She didn’t want that, not yet, so she slid her hands around his arms and held on. He said something low she couldn’t make out, and he touched her hair again. The soft and mysterious strokes were mesmerizing. She could hear his heart beating and the steady thump made her feel sleepy, a strange reaction after so much heightened emotion.
Ben moved one of his hands to her cheek and tilted her head to peer at her. She stared into his eyes and wanted to fall into unconsciousness, to just let all of it go for the rest of the day. A respite from her tattered life was all she wanted.
Ben frowned, looked at her mouth, and said, “Blast it.” Then, he kissed her.

Author Bio:
Lynn Rae makes her home in land-locked central Ohio after time spent in the former Great Black Swamp, beside the Ohio River, and along the Miami and Erie Canal.  With professional experience in fields ranging from contract archaeology to librarianship along with making donuts and teaching museum studies, Lynn enjoys incorporating her quirky sense of humor and real-life adventures into her writing (except the naughty bits).  She writes sci-fi, contemporary, and historical romances. You can find her posting frequently on Facebook at https://www.facebook.com/lynnraewrites or at her webpage http://www.lynnraewrites.com/