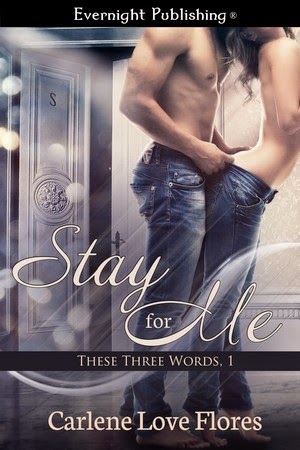 Hi Beth! Hi Beth’s friends! Thank you so much for inviting me back. I always love spending time here at your oh-so-pretty web home. And I love the new editions to the eye candy since the last time I was here. Hottie Hunnam, yummy! Okay, I will try to focus now… xoxo.

Yes! Stay for Me is book 1 of a new series called These Three Words. The series follows the curious love lives of a group of good friends who also happen to be male revue dancers. First up is sexy, gentle giant Sam. He’s an ex-soldier looking to right a wrong from his past with his best friend, Emma. All the guys make fun appearances in Stay for Me, so I look forward to getting their stories out, hopefully later this year.

My honest answer is A LOT! My rock star series came about because of a lifelong love of Depeche Mode that culminated in me getting to meet the guys. This new series was inspired by a weekend I shared back in October with my mom in Las Vegas. We were there to honor my step-dad who had passed away and whose last request was that everyone celebrate his life. He had taken my mom to her first male revue show back in the 70’s and so Mom and I decided to go to our first show together. We ended up seeing Chippendales one night and Australia’s Thunder from Down Under the next. It was incredibly inspiring on many different levels.

My favorite author in the entire universe is Sherrilyn Kenyon. I think she is phenomenal at writing a hero’s redemption and I love how unique her characters are. I’d love to siphon some of that from her somehow! Loved that question, thank you so much for having me!! Xoxoxoxox.

Blurb:
One night to finally make it right before it all gets torn apart…
Two years ago, best friends Emma Chester and Sam Jason tried being intimate. Due to Sam’s massive size, it didn’t work. Emma was hurt. Embarrassed, they did their best to move on. Now the day has come when Emma must suspend Sam as a dancer at the club they work at, awakening the buried pain of that one night.
Sam has seen this day coming but is shocked when Emma asks him to strip for her just once before he leaves the club. Allowing himself to feel for her again is too dangerous but she’s clearly not in her right mind and needs him.
Can he maintain his restraint and help her?
When she hands him his uniform to strip out of, is she handing him her heart? Or is it too tattered to ever belong to him again?

Excerpt:
“Are you okay?” she asked as he felt his back move against the wall.
No. In fact, he was ashamed of the slip in control as the thrill of that shot of her breath reminded him. He’d once thought of nothing else besides making love to her and had been pretty damn reckless in going after it as a twenty-one-year-old man. Didn’t matter that they’d been best friends since they were thirteen. In fact, that was what should have stopped him. How much time she and her family had given to improving his home life should have been his reminder not to touch. Not to kiss.
The sudden mind game didn’t stop there.
Tight knots shot up through his gut. Damn, he was not getting aroused, except for damn, he was. It was her eyes and her hair and what she’d been trying to do for him. He pushed down and adjusted the growing and inappropriate bulge so it didn’t bust the overworked zipper of his god-awful, tight pants. As soon as he did that, she finally spoke.
“You’re still in costume.” He watched her chest rise and fall with her deep breath, wondering what exactly it meant.
God, was she responding to him? He’d lie if he didn’t still have the clearest picture of her smile taking over her face when he came off the plane to meet her and her parents. She’d even told him how good he looked in his Army uniform. Haunted by the knowledge of how badly he’d hurt Emma trying to make love that night, he prayed for her sake that he was wrong. And now here he was thinking what? Two years he’d lived up to that vow. There had to be a way to crawl back into the hole he’d dug where feelings for Emma were buried.
Then she did the most dangerous thing of all. She crawled over to the wall where he’d escaped, reached out, and touched his shoulder.
“Didn’t have time to take it off,” he said and came out of his squat to rest on his knees, preparing to get up and leave before he did something stupid.
He could not hurt her again, and he was dangerously close to breaking his vow.
This was about quitting one job and replacing it with another, finances, and upholding secret arrangements with her parents who he loved like his own. Not drudging up the night he’d put everything on the line and asked her to be his, how eager she’d been to say yes, and how he’d screwed it all up. But now he couldn’t ignore the flood of fire as Emma’s brown eyes did their best to lie for her, same as his tried on his behalf.
“Emma, I should go. Gotta clean out my locker.”
Get some fresh air and a pair of pants that aren’t so damn tight.
He vaguely noticed the slight shake to the ends of her hair before she said the words that rocked his world, taking this completely off the playing field he’d been prepared to run around.
She rubbed at the tip of her cute little nose. “I only took this job because I knew if you left without me that night, you’d find a way to stay away for good. For my good. Just like you’re trying to do now. I’m calling bullshit, on all of this. I’ve wanted to be yours since the eighth grade, Sam. You tell me how to quit that. I’m tired of lying.”

A Bit About Carlene:
Carlene Love Flores is a big fan of the stars (especially Orion), honest music (especially Depeche Mode), and her traveling family (no favorites there-she loves them all). These things inspire her intimate style of romance writing. She feels honored to be a member of Washington DC Romance Writers (WRWDC), RWA San Diego (RWASD), and the Waterworld Mermaids. Carlene currently lives in the San Diego area where she can often be found listening to live music and looking up at the sky on clear nights.  If she could touch someone’s heart with her writing the way others have done for her, she’d say truly there never lived a luckier girl.
Carlene would love to hear from you, find her here:
Website / Facebook / Twitter / Evernight / Goodreads / Pinterest / Facebook Author Page