Congrats to Jessica Coulter Smith on her New Release! 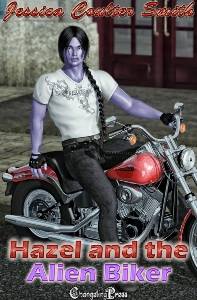 Kicked off his home world after losing his mate, Reyvor has made a place for himself on Earth, spending his afternoons drinking and his nights cruising the streets on his Harley. But all of that is about to change. A commotion outside of his motel room just may turn out to be his saving grace.

Hazel has lost everything, but she'd do it all again if it meant escaping the abusive boyfriend who liked to beat on her three girls and herself. Dumpster diving has never been her favorite thing to do, but she doesn't have a penny to her name and her girls are starving. But when she's caught, something miraculous happens.

Reyvor knows right away that the petite woman with the large blue eyes needs him. When he hears that this little ragtag family hasn't eaten in days, he convinces Hazel to accept a warm meal and a place to stay for the night. The girls warm his heart and remind him of what he once wanted out of life. Is it too late to start over?

Hazel is hesitant to trust anyone again with her heart, but Reyvor is determined to make her his. What's an alien to do when all he wants is a loving family to call his own? He'll break down her defenses one by one, until she melts against him and begs for his kiss. But can he claim the feisty Hazel without completely losing his heart to her?

Nikki, you’re the big sister. I would imagine you feel protective when it comes to your siblings. Did you have any reservations about Reyvor when you met?

No. I could tell by looking in his eyes that he was kind. Not many men would offer to let a woman and her three kids stay in his hotel suite, feed them, and clothe them. He didn’t hesitate when he saw we needed help; he just stepped in and gave us whatever we needed.

So you were okay with your mom dating him?

Reyvor is wonderful. I only wish Mom had found him sooner. Maybe if she’d had a chance to meet someone like Reyvor, she never would have stayed with Dad, and we wouldn’t have ended up on the streets.

Scary. You never know where your next meal will come from, or if there will even be one. Unless you have money to spend at a truck stop, there’s not really a chance for a hot shower, and you can forget about clean clothes because money is too scarce to spend it at a laundromat. I think the scariest thing was the night Abby was almost abducted from the homeless shelter while we slept. If she hadn’t managed to scream, I doubt we would have ever seen her again.

You’re a very brave little girl to go through all that.

I’m not little. And you have to be strong to make it on the streets. There isn’t really a choice if you want to survive.

Very! Reyvor bought us this amazing house where we all have our own room. And I’m kind of hope for another sister or maybe a brother before too long. Mom told Reyvor she would be okay with having more children and I think it would be great to have a bigger family.

Well, thank you for visiting with me, Nikki. I’m glad you got your happy ending.

EXCERPT
Hazel looked at her children and wondered what she was going to do next. It had been weeks since they’d had a bath, even longer since they’d had clean clothes. All of their belongings had been stolen at a shelter downtown, and poor Abby had almost been abducted. Hazel had steered clear of the place since then, deciding it was safer on the streets. They’d slept in the park on nights when it was nice, and huddled in shop doorways on rainy ones. It had been so long since they’d felt the comfort of a bed or had the luxury of a roof. But living on the streets was better than the alternative.
“Momma,” Winnie said. “Are we going to sleep here with the nice purple man?”
“He’s a Terran, honey, and no. We’ll stay long enough to eat and then we should move along. It was nice of him to offer food for us, but we mustn’t take advantage of him.” Even though she had to admit staying with him wouldn’t be a hardship. When she’d crashed into him, she’d felt the strength in his arms and her gaze had clashed with his dark pansy colored one. She’d felt her heart race in her chest and had hoped he couldn’t feel it too.
Abby curled into the corner of the sofa. “But it’s nice here. I don’t want to leave.”
“I’m sorry, sweet angel. I know you miss things like TV…”
“And hot water,” Nikki mumbled.
“But we just can’t afford a place right now,” Hazel continued as if her eldest daughter hadn’t just smarted off.
“Since you don’t work, we’re never going to afford a place,” Nikki said. “Are we going to live on the streets forever? Because right now, I’d rather be home with Dad.”
Hazel sucked in a sharp breath. “You don’t mean that! Your father is the reason we’re living the way we do. Did you really want to stay and see if he became angry enough to kill one of us? Or all of us? Weren’t you tired of the beatings and screaming?”
“Daddy’s a mean man,” Winnie said. “But the purple man seems nice. Maybe he wants a family.”
“Honey, you can’t just pick a man and decide to live with him.” Well, technically you could, but she didn’t want to get into that with her middle child. At seven, Winnie was too smart for her own good. And Hazel wouldn’t lie to herself… she kind of liked the idea of staying with the Terran. Their meeting had been brief, but she’d seen kindness in his eyes and there was a gentleness to his touch. Two things that had been missing from her life for a long time.
“Why did you stay with Dad so long if he’s so horrible?” Nikki asked.
“Your father was nice when we first met, and he treated me right. It wasn’t until Winnie was born that he began to change. Something twisted in his mind and suddenly everyone was out to get him and nothing was ever good enough. $We weren’t good enough. I’d rather live on the streets than take a chance on your father harming one of you again.”
The sound of a motorcycle alerted Hazel to the alien’s return. She shushed the girls and hoped they wouldn’t say anything embarrassing in front of him. He really did seem like a nice man, but they would accept their meal and be on their way. If they hurried, they might still get a good spot at the park to sleep for the night. Not that Hazel did much sleeping. She dozed off here and there, but she tried hard to stay awake and watch over the children. Her body was exhausted and she couldn’t remember the last time she’d slept through the night.
Unbidden, an image of her wrapped in Reyvor’s arms rippled through her mind. What would it be like to be held all night by someone like him? She doubted she would ever find out. 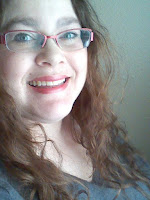 What happens when you get two artistic romantics together? An impulsive marriage proposal - and a woman who says yes (on the first date)! While Jessica's husband may not have intended for the words "marry me" to pop out on their first date, she surprised him even more by saying yes! That was in 2000 and they're hoping for many more years together.

Jessica Coulter Smith began writing at an early age, but it wasn't until 2008 that someone convinced her to have one of her stories published. When she received her acceptance letter in August 2008, it set her on an incredible journey, one she hopes will never end. In 2010, she decided to stay home with the kids and write full-time. It's a decision she hasn't regretted, and one that will hopefully result in many more stories to come.
Stalk the Author
Facebook: https://www.facebook.com/jessicacoultersmithauthor
Twitter: https://twitter.com/kitcatjms
Website: http://www.jessicacoultersmith.com/
Blog: https://jessicacoultersmith.wordpress.com/