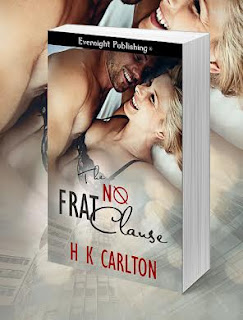 Thank you so much for inviting me, Beth! Excited to be here.

An interesting fact about this story is that it has had several different tellings and titles.
Considering it is not that old of an idea, this story has gone in many different directions.
The first title I dubbed this one was, Say My Name, since our sexy hero Roger, often says that to his new personal assistant Lexi, during some very intimate moments. The next incarnation of this story was entitled, The Moment of Truth, but I tried something a little different and it was not well received, it just didn’t work out. Live and learn. So back to the drawing board, I reworked the original Say My Name manuscript, but I no longer felt like that was the right title for the new and improved story. I finally decided on The NØ Frat Clause, because it is the crux of our hero and heroine’s conflict.

Coffee, coffee and more coffee, along with my Chihuahua by my side.

They absolutely develop for me on the fly. I might have a vague direction when I start, but the characters show me the way and often it isn’t where I expect to end up. They’re a pushy lot.

When I first started writing a lot of real life went into my stories but sooner or later you run out of things to share or that you can relate to. Often the day to day, is not that interesting. LOL. Not to say I don’t throw some of my own experiences or of those around me into it, I do, but  some of my more recent projects, I have zero experience in, so we’ll see how that goes. J I’ve been known to use snippets of conversation I’ve overheard, while I’m out and about, between absolute strangers, into my stories. So word to the wise, be careful what you share in public. You never know who might be sitting within earshot at the coffee shop, at the grocery store or on a plane. Author fodder is everywhere.

I have several manuscripts on the go but nothing complete at the moment. So stay tuned.

Temptation... It's all around us... the flesh is weak.

Haven't we all been tempted, at one time or another? Sometimes it's just too hard to be good.

Whether it's that rich chocolaty slab of cake alongside a cold glass of white milk while you're on a diet, or that drool-worthy muscle bound guy at the gym who you can't seem to keep your greedy gaze from, or the gorgeous young intern, new to the firm, who just needs some good training.

Temptation doesn't obey the rules and though they try their best to fight it, Roger and Lexi, don't either, The NØ Frat Clause.

Fresh out of college, Lexi Wideman lands an entry level job at a lucrative recruiting firm. Only six months into her tenure, she’s offered a major promotion—executive assistant to Roger Kent, the company’s coveted corporate headhunter. Older, irresistible, and ruggedly handsome, Roger Kent turns her into a liquid pool of need with just one smoldering glance. But the opportunity is just too good to pass up this early in her career. Lexi must find a way to remain professional while panting after her boss.

Roger Kent is thrown off guard when the company execs all of a sudden decide he needs an assistant. Perhaps he does, but Lexi Wideman is not the girl for him. She's smart, young, and gorgeous. It's hard enough trying to keep his eyes off her. Working in such close proximity, day after day, it would only be a matter of time before his hands followed.

I hope you enjoy this naughty tease. A little Love in an Elevator...
(sorry, I just got that song stuck in your head for the rest of the day).

All of a sudden the lights flickered once again, and the lift jerked.

Oh God was right. Any higher and she was going to get a rock-hard handful.

I wound my arms around her, and we held on as the elevator came to shuddering halt. The lights went out entirely, plunging us into complete darkness. The hydraulic hum of the mechanics powering down droned. Then there was silence except for the clicking of the cables.

“It’s okay. Take it easy,” I reassured her. “The auxiliary lights should come on in a second when the generators kick in.” But seconds ticked by and nothing happened.

“Power outage from the storm I’d say. Guess you were right, we should have taken the stairs.”

“Oh boy.” I felt her take a deep shuddering breath. She shifted, centering her back to my chest, and relaxed into me. I tried to maintain some distance, but there was no help for it, with her perfect little ass snugged right up against my upper thighs. There was no way she missed the massive bulge in my pants. She tensed, but she didn’t pull away either.

I inhaled her familiar scent. Another bad idea. It was just as arousing as the rest of her. She smelled fanfuckingtastic.

Her breathing became erratic. I was afraid she was about to panic.

“We’re okay. Relax.” I ran my hands up and down her arms.

She melted into me.

“Do you have your cell phone?” I asked in a tight voice. “We could use it for light. And-or call for help. At least let someone know we’re in here.”

“I think I tossed mine in the briefcase. It's down here by our feet somewhere.”

A ringing noise made us both jump.

I released her and groped in the dark until I found the little door containing the emergency phone. “Hello?” I answered in a clipped tone.

“What's your name, and how many are with you?” a gruff voice barked.

“Roger Kent. There are two of us. Myself and my assistant.”

“We're working on getting you down. Try not to panic.”

“All right, but can you do something about the auxiliary lighting?”

From the awkward way I'd been leaning, I straightened up slightly, rearranging my hips back into the corner. “We’re gonna be a while,” I said and reached for Lexi. It was pitch black. I couldn’t make out a goddamn thing. “Where'd ya go? Christ, it’s dark.”

“I'm searching for the cell.” Just then my palm made contact with a nicely rounded hip. Oh fuck, she was bent over in front of me. I followed the soft plump curve as she rooted through the briefcase. I closed my eyes and took long, slow inventory of her shapely backside. I stifled a groan, but it escaped as more of a grunt.

Slowly, she straightened and turned in my direction. The low light from my cell screen glowed, illuminating the space between us.

The tension between us was palpable. She stared at me. Her lips parted. I don’t know what she saw in my expression. One of us made a growling sound. I suspect it was me.

Simultaneously, she dropped the phone and reached for me as I grabbed for her. I sought her lips hungrily as the darkness enveloped us once more. She moaned something incoherent into my mouth.

In a wild frenzy, we nipped and sucked at each other’s mouths, our hands roamed free and greedily. My cock lengthened to painful proportions.

Lexi arched into me, her ample breasts pressing against my upper chest. She squirmed as I tried to gather her sweet backside in my greedy hands. Lifting her, I thrust my hips at her, leaving no doubt as to what I wanted.

In answer, she pressed her pelvis against me. The pressure felt amazing, but I wanted more.