Q&A with Annie Harland Creek on her new Release! 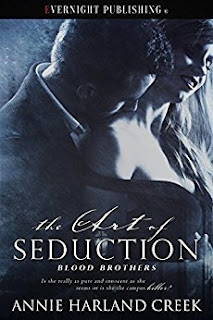 Hello Annie!  Thank you so much for visiting Written Butterfly with me today!  It’s such a pleasure to chat with you.  So tell me…

Thanks for having me Beth.

Q) Is this book part of a series?  If so, can you tell us about it?
This is part two of the Blood brothers series but both are stand-alone books. Kiss of death introduces Derrick and his brother. Both are vampires but they are very different in personality.

David, the protagonist in book two, tried to take over book one so I had to promise him his own. LOL.

I’m what they call in Australia, a pantser. I sit down at the computer and the scenes play out in my head.

I’m madly trying to finish book three in the series which will re-introduce a couple of the secondary characters from one and two. Unfortunately, book four keeps interrupting. The characters in this story will be very different to anything else I’ve written. I may need to flitter between the two.

The Art of Seduction

Meaghan Lamb has a mission. She plans to use her undercover assignment in the local University to prove, once and for all, that she has what it takes to make a great detective. But when her class is assigned a very hot nude model/artist, her plans turn pear-shaped. As her suspicions about him grow, so does her attraction but how can she allow herself to fall for a man who could be a cold-blooded killer?

David Corel has seen his paintings come to life in the form of a beautiful, blonde art student who seems unable to look at him without blushing. But, is she really as pure and innocent as she seems? Or could she be the campus killer?

“No, no, no.” David protested as he came up behind her and took the brush from her hand. “For a start, this is the wrong brush.” He exchanged the bristle for a sable brush and delicately dabbed it onto the palette. “Think of your brush as a tool.” He said as he put the brush in her hand and held her hand to the canvas. She could feel the hard muscles of his chest on her shoulders as he leaned over her, moving her hand like a marionette. Together they stroked the canvas.
“When you hold the tool, I want you to make slow, seductive movements like this…” he demonstrated downward movements, “the oil makes the paint slide easily, making your brush strokes more fluid.”
It took Meaghan only a few seconds to realise his double entendre. “Control the tool. Move your hand slowly up and down, adding linseed oil when your movements begin to catch. Ah, that’s good.” He pressed against her, his erection rubbing against the small of her back as he continued his play on words. “The tip is very sensitive. Use a featherlike touch for optimum effect. Pay careful attention to the reactions of the canvas. You will sense when to add oil and when you should apply more pressure. That’s very nice. You’re doing well…keep up the pressure…yes, yes…that’s it.” She heard his low, quiet groan and she gasped in response. “As the pressure builds, move faster, faster Meaghan…oh, that feels good doesn’t it.” His voice breathless, ragged as he moved her hand furiously over the canvas.
“Faster…until you can sense that the canvas is at the point where it can take no more, then… add a bit more for good measure.” David stopped abruptly. The painting finished. Meaghan could hardly believe what they had created in such a short amount of time. She stood admiring the work. Her body exhausted as though she had been put through a wringer. Damp heat soaked her dress. She shuddered when David asked her.
“Was that as good for you as it was for me?” 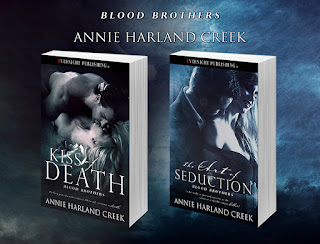 AUTHOR INFO
Annie lives on the NSW Central Coast (Australia) with her very supporting husband and two of her grown children. She loves spending time with her granddaughters who live with their parents within walking distance of Nannie and keep her on her toes.

As a former Shotokan Karate Instructor, she loves to write about strong women who prefer to fight their own battles. Her family shares a love of weapons, the nastier the better, but her home is also filled to the brim with books.
Raised to enjoy reading and learning about the supernatural, it seemed logical to eventually write her own stories. After completed University, graduating with a BA in English and Ancient History, she entered and won a short story writing competition which gave her the confidence to submit her work to publishers. Her vivid imagination ensures that she will continue writing for many years to come.