Q&A with Lynda J. Cox on her new Release! 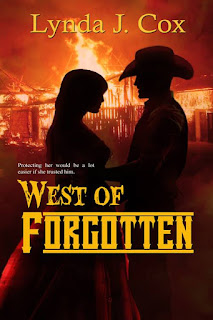 Hello Lynda!  Thank you so much for visiting Written Butterfly with me today!  It’s such a pleasure to chat with you.  So tell me…

West of Forgotten was written many, many moons ago, but I was never ready to let them go into the world. It’s actually the fourth book I’ve published. Harrison and Rachel played recurring roles in the first three books I’ve published and from the small parts they had, it was apparent that Rachel was the one Harrison deferred to most of the time. I knew when I wrote their story, she had to be as strong as they came, and Harrison had to be as strong in his ability to adjust to her. She’s been damaged and if he wasn’t so adept in reading her, the dynamics would have been a lot different. The dynamics were very different in the very first version of this book.

Technically, no, it’s not part of a series, though so far all of my books are set in the same small town of Federal, Wyoming. Federal was an actual town at one time, though now it’s barely a wide spot on a spur of the Burlington/Northern Railroad Line.

I’ve never lived in Wyoming (at least in this lifetime), but Rachel’s intense sense of homesickness when her father sent her away to boarding and finishing schools came from my own sense of being homesick for that place. Rachel always packed some sagebrush in her trunks so she could smell the dried sage when she was banished back East. Every year, when we are on vacation in Wyoming, I cut several sage bundles to take back to Indiana for the same reason. Rachel always had a small piece of white quartzite in her trunks as well. I have a small piece of that white quartzite from the Medicine Bow Mountains on my desk, a piece on my night stand, a piece on the dashboard of my vehicle, and a piece in my purse.

West of Forgotten started with a dream I had. (No joke.) I couldn’t remember much of it, except for one small scene that kept playing in my head. I saw this young woman in an 1870s mourning dress, backed up to a piano and this man standing in front of her. I started asking myself who she was, why she was afraid and why he was trying so hard to allay her fears. It grew from that one scene.

I’m a pantster when I write—BUT, I have to know every minute detail about my characters before I start writing. I use a character questionnaire for the main characters and it’s fairly in depth: level of education, phobias, strengths, biggest regret, siblings (if any), greatest ambitions—those sort of things, along with physical characteristics.

I write historical, so I’m rather limited in tweaking historical facts. However, that real life also influences what I write. And, sometimes, a real historical figure finds his or her way into my books. Who knew U.S. Grant didn’t like to lose at poker?

Banished from civilization to the Wyoming Territory, U.S. Marshal Harrison Taylor holds a deed to half the Lazy L. He isn’t sure why his beautiful new partner, Rachel Leonard, doesn’t trust him. He has to convince her he is nothing like the man who abused her and must earn her trust before the escalating attacks at the Lazy L turn deadly.
For six years, Rachel has worked to repair a shattered life. Caring for her son and invalid father leaves little time to keep the Lazy L profitable. She doesn’t want a business partner simply because her father gambled away half of her beloved ranch and most certainly doesn’t desire a husband. Unfortunately, she’s stuck with the former and can’t trust Harrison as the latter.
Unless she can learn to trust Harrison, everything and everyone Rachel loves will be lost.