Julie Shelton Visits to talk about her Alpha Chronicles! 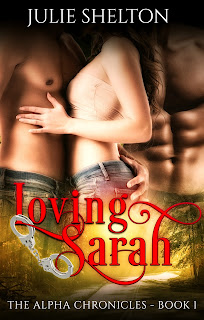 The first thing that came to me was the primary hero’s name—Jesse Colter. I loved the name. And I knew that MY Jesse Colter would have black hair and black eyes and be supremely masculine, self-confident, and ruggedly handsome. He would also be part Native American and the only son of a brutal father, who also happened to be the town drunk. At age 24, he leaves the town of Marshall’s Creek and joins the Navy, becoming a SEAL.

My heroine, Sarah Marshall, is the only child of a Circuit Court Judge, who has been raised by nannies and tutors within the sequestered confines of her ancestral, ante-bellum estate, Marshall’s Hill. She goes on to graduate from Harvard Law and returns to Marshall’s Hill to become the new County Attorney.

It is now eight years later and Jesse has just been hired as the new Police Chief who is scheduled to meet the new County Attorney.

Ho hum, you say? Well, you would be right. Unless…. Suppose there’s history between them? Suppose, thirteen years ago, when Jesse was 19 and Sarah 13, he worked for the summer as a gardener’s assistant on her estate? And suppose he rushed to rescue her from falling out of a 30-foot tree? Suppose they formed an instant bond? One that soon ripened into a forbidden love as Sarah matured? Suppose, before he high-tailed it out of town five years later, he rescued her once again? But, suppose that this time, he nearly gave in to Sarah’s pleadings and his own long-suppressed yearnings, and finally had sex with her? Only, he manages to push her away at the last minute. The next morning, desperate to see him, she rides her bicycle to his house, only to discover both him and all his belongings gone. He’s disappeared without a trace, leaving her devastated.

With all that history between them, suddenly this meeting eight years later becomes a much more interesting proposition.

And then, suppose he ducks out of the meeting, choosing instead to pull her over on her way home from work and give her a ticket for failing to signal a right-hand turn? Sarah’s still fuming over his ducking the meeting. And now he’s giving her a ticket?

That’s the explosive, emotion-packed beginning of Loving Sarah, Book One of The Alpha Chronicles.

Yes. I originally planned for Loving Sarah to be one book. But my characters had been bottling up their emotions for eight years and had a lot to say and feel and express. Especially since Adam Sinclair had joined them to make their relationship a menage. So, it became two books, Loving Sarah and Owning Sarah. But as soon as I sent Owning Sarah off to be published, I didn’t want to let go of any of these characters. I had come to love them so much and I didn’t feel they were ready to be silenced.

So, I began thinking about what sorts of things I could write about in a third book. Since they were married at the end of Owning Sarah, why not start out with them on their honeymoon? Not exciting enough? Okay, then. Their honeymoon could land them right smack dab in the middle of an undercover, highly covert operation to take down one of Europe’s biggest sex trafficking operations! Make it part of a sex slave auction! And, just for laughs, let’s throw in an Albanian blood feud that nearly gets the three of them killed on their way TO the sex slave auction! That’s Keeping Sarah, Book Three of The Alpha Chronicles.

I got the Albanian blood feud idea from an episode of Law & Order: Criminal Intent.

I plan out a very sketchy plot idea, some background info about the main characters, but mostly I just wing it and allow them to develop as I write.

A lot. Many of my experiences wind up in my books.

I am working on Passion’s Reward, Book Six of my series The Doms of Passion Lake. Many of the heroes in this series were minor characters in my three Sarah books, so if, after reading those, you want to know what happens to Nik, Jay, Caleb, Raven, and others, they either already have or will be getting books of their own in the Passion Lake series.

THE ALPHA CHRONICLES - The must-read series after you’ve read FSOG.

“One of the best erotica/BDSM series I have ever read. The chemistry between these three is 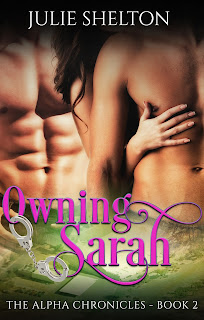 blistering. Pure molten lava. The sex scenes are scorching and extremely well thought out. Jesse and Adam are super dominant, super strong, super hot. If you want your sexy, bossy, alpha males, you've got them here in spades.”

After an eight-year absence, retired Navy SEAL, Jesse Colter returns to Marshall’s Creek. Can he convince Sarah Marshall she’s the only woman he’ll ever love? Can he convince her to give him a chance? A chance that includes his best friend, Adam Sinclair? Can she forgive Jesse for leaving her eight years ago, devastated and broken-hearted? Can she submit to two powerful Doms? And when her stalker strikes, can Jesse and Adam rescue her before she’s lost to them forever? 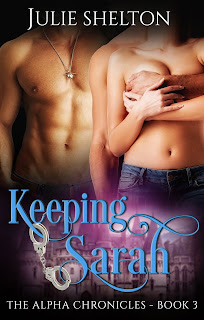 AUTHOR BIO
From fairies in the garden at age 9 to handcuffs in the boudoir at age 75, Julie’s writing has run the gamut. In between she managed to graduate cum laude with a B.A. in French followed by a Master’s Degree in Library Science. Having thus procured these two necessary but ultimately irrelevant pieces of paper, (Seriously. What can you do with a B.A. in French?) she launched a successful career as a children’s librarian, followed by an even more successful, 30-year career as a professional storyteller and puppeteer. She published Kidstuff, an award-winning, monthly newsletter, as well as a book, Puppets, Poems and Songs, both major language arts resources for early childhood educators.
At various points in her life, if asked what she would like to be, her answer would have been (in rough chronological order, since some of these lofty ambitions overlapped): a fairy, a princess, a ballerina, Nancy Drew, Cherry Ames, a paleontologist (until she realized that paleontologists spend much of their lives camping), Scarlett O’Hara, thin and beautiful, and an actress. Now, at age 75, her answer to that question would most likely be, “younger”.
Followed closely, of course by bestselling author. Oh, and a princess. Some dreams just never die.