Where the Hell Am I?...Amboy CA


We took my car on this drive because it has good gas mileage and Mike’s truck doesn’t. I thought we were heading back to California to the volcano at the lava tubes (previous post), but much to my surprise, he directed me away from Interstate 15 once we crossed over from Nevada into California.  At this point, I had no idea where we were headed.


One thing I’ve learned once you go off the beaten path is that the further you descend into the unknown, the weirder things become.  Our trip to Rachel, Nevada for instance.  We stopped to get a bite to eat in the Lil’ Alieen’ Inn. I swear they were trying to serve me alien meat instead of roast beef.  I’ve never seen anything so shiny green in my life.  But I digress…


Several hours after our start, we pull into this tiny area that had a broken hotel, a café that didn’t 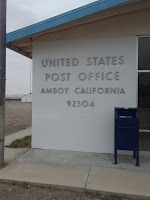 serve any food (except the prepackaged snack kind) and a post office. The post office declared it Amboy, California and it was only then that I realized what we were exploring.  The Amboy crater!


It is hikes like this one where I challenge myself, because even though it was an easy mile to tread from the parking lot to the bottom of the extinct volcano, the problem was the hike to the top.  I am scared of heights, and it’s not the oh I’m so scared but I’m still going to ride the rollercoaster kind of scared but the I’m the breaking down into tears can’t move kind of scared.  However, I don’t want this fear to stop me from doing what I love doing, which is exploring with Mike.  I tackled the accent with the same mantra that I use whenever I want to climb…one foot at a time, don’t look behind.  If I concentrate on my feet, I can get through it. 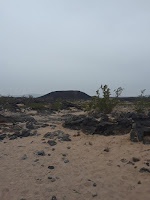 Reaching the summit, I stepped into the center.  Yes, the volcano has long been extinct, and there’s no danger of it suddenly erupting.  But it was so amazing to walk through the part that had blown off a millennia ago. People had created drawings out of the rocks and I always respect other’s art. I even added a rock to the one of the designs to add my own energy.  Mike went ahead of me and climbed to the brim, and I wanted to do the same. But halfway up, I messed up my mantra and looked to the side, and I realized how high I was.  My concentration was shot and I froze. My brain kept screaming to move but my body was on safety mode.  If I was a turtle I’d have withdrawn into my shell.  Mike asked if I needed help but I said no. I wanted to move past this on my own.


Eventually I did, and I reached the brim. I had conquered the fear instead of letting it conquer me…this time. Every hike, every climb is different and I can’t promise myself that I’ve beaten this gameshow called acrophobia, but I’ll definitely play another round of it soon.


I took my obligatory photo from the top and then sat down on my butt and scooted the entire path
down.  I wore denims because I knew something like this was possible. I take away the center of gravity so I feel safer by sliding down on my butt.  I’m so thankful for Mike for understanding and lets me navigate this fear the way I need to in order to handle it. He’s an amazing partner in life. 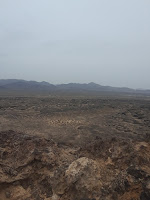 Amboy might not be much to some people, but I found it really cool to explore. I hope you like the video I made, so make sure to follow the link at the bottom. And please come back next Sunday for another adventure with us!


Thanks for visiting! If you'd like to see the video I made of this trip, just click the link: