Where the Hell Am I?....The Vortex, Utah

Truth be known, Mike and I were going to California this time around but then we heard someone won the $541 million megabucks so we decided to head in the opposite direction. Utah is one of our favorite places to visit. We both love St. George, located at the south western side of the state. The drive to get there takes you through Arizona, along an Interstate carved through a mountain. I took some video of it, but it really doesn’t do the ride justice.


The hike we decided to go on is called The Vortex, located near Gunlocke, outside St. George. I’ll admit, I had no idea what The Vortex was, although I did ask if it was that weird place that Zak Bagans investigated on Ghost Adventures where everything is tilted and a ball rolls uphill. Mike said no, much to my disappointment. The hike begins immediately from the parking lot, a semi-steep decline to get to the canyon. The bushes at the bottom were blooming so there were a gazillion bees. Mike bravely marched through them and I skirted around until I found a bee-free way to the path. 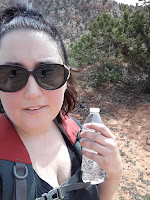 Utah, in my opinion, is amazingly breathtaking. There are a lot of remnants from volcanic activity a millennia ago, and the mountainous rocks around look as if they had melted before solidifying. Red and white Navajo sandstone dot the landscape and this is what you’ll hike on. Because it’s not a usual trail, the landmarks are rock sculptures people have made along the way. Or you can do with Mike and I use, which is the AllTrail app. You can download the trail to your phone and pull it up when there’s no internet service.


The day was warm (85 degrees F) the sun was hot (we forgot sunscreen), and I really thought I was in better shape. The natural step incline of sandstone is deceptive making your think it’s an easy hike, but halfway up I’m panting and my calves are protesting. I make Mike check our altitude but we’re only at 4421 feet, which is nothing, so I’m at a loss. 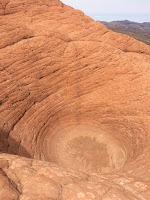 Finally, we reach the top and the first depression is called The Bowl. Impressive. But over the hill is The Vortex and my acrophobia rears its head. I back away and let Mike take the picture of the massive hole that was formed by wind.  You can find more info at the official website: https://www.hikestgeorge.com/the-bowl-lower-sand-cove/

We each our sandwiches, rest and take in the scenery, before heading back down. The last fifty yards or so were a complete bitch because we had to hike uphill in sand, plus I had to find a way around the damn bees again.  But we get back to the truck and relax in the nice air-conditioned cab. Our last stop of the day is in Veyo, Utah, home of the best pies in the world. Seriously. Not too sweet with a buttery crust….Mike got a slice of banana cream and I ate strawberry rhubarb.  The perfect end to a fun hike.


To watch the video: https://youtu.be/60QZQW4pYEE


Thanks for visiting! Check back next Sunday for another off the beaten path adventure with Mike & Beth! 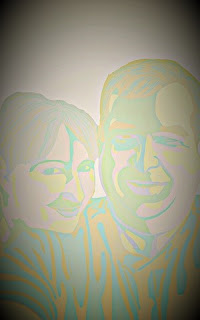