Check out the Playlist for "Saved by the Cyborg" from Jessica Coulter Smith!

Cy-Con #3 Playlist – Saved by the Cyborg


§  Let It Go (Metal Version) by Connor Engstrom
§  Basket Case by Green Day
§  Without Me by Halsey
§  Shallow by Lady Gaga & Bradley Cooper
§  Broken by lovelytheband
§  Never Gonna Be Alone by Nickelback
§  M!ssundaztood by P!nk
§  The Show Must Go On by Queen and Elton John
§  Still Loving You by The Scorpions
§  A Million Dreams by P!nk
§  With You by Linkin Park
§  Paradise City by Tom Cruise (Rock of Ages Soundtrack) 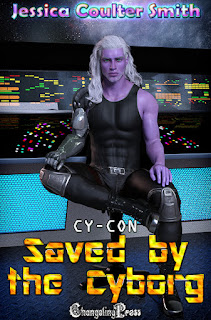 He’s a monster -- a cybernetic freak feared by females. Until he finds her…

Tark wanted a mate even before he joined the Cy-Con program. His sheer size made females fear him, and now that he’s been turned into a cybernetic freak they avoid him even more. When he finds a female being held in a brothel against her will, he knows that he can’t leave without her.

Tark means to take Suki home to his world, a place where she can heal and start a new life. He never realized she’d want to start that life with him, or that she’d insist on leaving the safety of Xpashta in an effort to rescue others like herself.

Tark saved the alluring human female once. When she’s captured during a dangerous mission, he knows he’ll have to do it again, and this time, he’s not letting her out of his sight -- especially when he finds out she’s pregnant with his child. 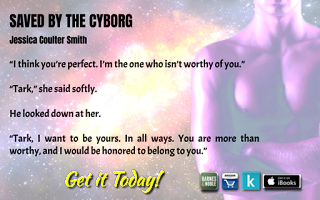 “Why is it hard for you to believe I would want to be with you?” she asked.


“Females don’t want me,” he said after a few minutes. “They never have. Even whores have run from me in fear. I’ve never…”


He looked away, but Suki could tell he was embarrassed. Was he trying to say he was a virgin? She couldn’t believe it. How could anyone turn him away? Tark was kind and protective. And he’d been gentle with her. Despite his mechanical arm, he hadn’t harmed her, not once. He was always careful when he reached for her, or carried her. She didn’t understand why women didn’t beg for his attention. On Earth, she’d been independent for the most part, hadn’t felt she needed a man for anything. She’d had boyfriends, but none that lasted longer than a month. But being a slave had taught her that out here in space, far from the world she’d called home, she did need a male, as long as it was the right one. She’d been too weak to fight them off, too weak to save herself and her sister. The thought of someone big and strong offering protection was tempting.


Suki stood and placed her hand on his bicep. He was so strong, so… He made her feel safe, and that was something she hadn’t felt in a very long time. If she could do anything, she wanted to make him realize that not all females feared him. She didn’t. If he claimed her as his mate, she would feel like the luckiest of women. She just didn’t know how to make Tark see that.


He looked at her, his gaze holding hers. If he’d never been with a female, had he ever been kissed? Suki leaned forward and lightly brushed her lips against his. Tark froze, every muscle in his body tense. Suki moved her mouth against his, giving him the softest of kisses, until he began to relax. She pulled back and stared into his eyes. Tark looked stunned as he reached up and touched his lips.


“Kiss you,” he repeated, staring at her lips.


Tark’s gaze flicked up to hers then lowered to her mouth again. Slowly, he leaned in and pressed his mouth to hers. Suki placed her hand on the back of his neck, her fingers tangling in his hair. Suki parted her lips and touched her tongue to his lips. Tark groaned and opened, letting her in. She kissed him slowly, deeply. And all too soon, he was pulling away. Suki clung to him, not ready for it to end just yet. It had been so long since she’d felt anything like that, and maybe she never had. Kissing Tark felt different, but in a very good way.

WHERE TO BUY
Changeling Press - https://www.changelingpress.com/saved-by-the-cyborg-cy-con-3-b-2871


Award-winning author Jessica Coulter Smith has been in love with the written word since she was a child writing her first stories in crayon. Today she’s a multi-published author of over seventy-five novellas and novels. Romance is an integral part of her world and she firmly believes that love will find you at the right time, even if Mr. Right is literally out of this world.
Find Jessica on Facebook / Twitter / Instagram / jessicacoultersmith.com.