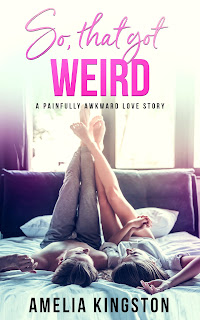 Hello Amelia!  Thank you so much for visiting Written Butterfly with me today!  It’s such a pleasure to chat with you.  So tell me…

SO, THAT GOT WEIRD is the first book in the So Far, So Good Series. Each of the three books is based on a couple that seem to be complete opposites, but somehow seem to fit together perfectly. In SO, THAT GOT WEIRD, painfully awkward Elizabeth is only ever comfortable behind her computer screen, shrouded in anonymity. Austin is a larger than life college football superstar. He’s comfortable everywhere. Or, at least that’s what he wants people to think.

Any Jane Austen fans will recognize Elizabeth. And Austin is a nod to my favorite author as well. The rest of my characters, I think their names are a reflection of who they are or who they wish they could be. I see them in my head and then just roll around names until one just sounds right. When I get stuck, I have been known to pull up a baby name book or two. :)

The easiest scenes to write are always the steamy ones. Guess I’ve always had a naughty mind. Plus, it is so satisfying to have the culmination of all the push/pull/struggle of the characters result in some quality time. The hardest are probably the fights and break ups. I can see them coming, but it still kind of sucks to rip apart these guys you’ve been trying so hard to bring together.

I have a couple, but my favorite line from Austin is, “I grew up being a chameleon, giving people what they want, hoping to be wanted in return.” It’s just so heartbreaking true for him. For Elizabeth, it’s probably, “This isn’t my first colossal disaster of a date. Epic failure is kind of my thing.”

I am a bit of a nerd, but no where near what Elizabeth is. I had to call in a few favors with friends to help with some of the nerd-speak.

Hmmm...I think my strongest asset is banter. I love writing snappy dialogue between my two main characters. You can really see their relationship come to life in what they say. Or don’t say. My weakest factor (like most writers probably) is show vs. tell. I see the scene so clearly in my head, I forget the reader can’t see it unless I bring them into my world. I admire fantasy and sci-fi writers who have that unique skill of world creating. I try, but I’m a work in progress. Aren’t we all?

I have a favorite book I’m about to write. I know that sounds weird, but the third book in this series, SO NOT MY TYPE, is about surly and sarcastic Jackie (you’ll meet her in SO, THAT GOT WEIRD) who I absolutely adore. She is one of those characters that doesn’t just speak to you, she grabs you by the shirt collar and screams in your face, demanding her happily ever after. I know she is going to be beyond fun to write and will be one of my favorites for many years to come.

Tough question. I usually write linearly, mostly because the story plays out in my head like a movie and I’m just trying to get it all down before it moves on to the next scene. But, there are some parts that I skip over and come back to if the characters are just screaming for a particular scene.

Each book is a standalone, with its own happily ever after, but they’re all set in the same world, so you get to keep seeing the same characters you’ve fallen in love with from the other books.

The next book in the series, THIS IS SO HAPPENING, should be out next year. It is about perpetually perky Jessie and her obsession with the brooding, dark Devin who is the first guy she’s ever met who refuses to give her the time of day. What girl can resist a challenge? Especially a tall, dark and handsome one! 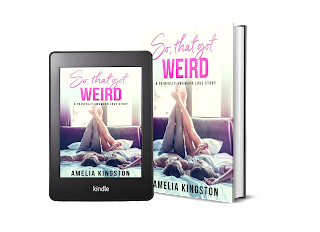 The devastatingly hot jock Austin Jacobs is just the man for the job. As the reigning campus sex god, he has the playboy act down pat. But underneath those six-pack abs beats a broken heart. He doesn’t trust people and he sure as hell doesn’t believe in love.

When Austin coaxes Elizabeth out from behind her computer screen, the attraction they feel is undeniable. They’re both a little broken, but somehow their jagged edges fit. And when their world comes tumbling down on top of them, they each have to decide if this weird thing called love is worth fighting for.


“What do you want to be tutored on tonight, Goose?”


I blush at the sound of my nickname.


“Well, Mav.” I’m trying to annoy him, but secretly I relish the idea that it’s something only I call him. Maverick. It suits him. “I made us a schedule, actually.” My voice has more uncertainty in it than I was hoping. I hand him the carefully thought-out schedule I crafted over the past few months.


“Of course you made a schedule,” he quips with a smirk. His smile only grows as he reads. “You made us a sex syllabus, a sex-abus.”


I groan. He continues undaunted.


“Four weeks, four topics. Looks like we round a base a week. This week’s kissing. Next week is touching, groping, fondling. Then, oral. Giving and receiving. Last week we hit a few home runs,” he offers.


I get lost in my thoughts of what these next four weeks are going to be like. My body flushes and I cross my legs, fighting the building warmth between my thighs. It’s not like I haven’t pictured all this before, but now I’m starting to realize it’s actually going to happen.


You are going to lose your virginity to Austin Jacobs!


“You seriously think we need a whole week dedicated to kissing?” he challenges.


“It’s important to build foundational knowledge in a new subject before advancing to more challenging material.”


“Come here.” He saunters around the kitchen island and I stand up to meet him. He steps right into my body. I start to lean back, but he grabs my hands and puts them around his neck. The gesture highlights our height difference. I can barely reach without him having to bend down.


His fingers slide over the delicate skin of my forearms and down my sides, causing an effervescent tingle across my whole body. He wraps his arms around my waist, pulling me into him firmly. I’m so small in his embrace. It makes me feel dainty and weirdly feminine.


I don’t do anything.


I just stand there.


He’s right here and he is asking you to do it!


My heart races, my stomach flutters. My throat gets tight. My mouth goes dry. I spiral into panic. Those beautiful blue eyes are bearing down on me expectantly, burning into me. I close my eyes, count to three in my head, and do it. I push forward on my tiptoes and quickly peck him on the lips. Peck is a generous term for the limp-lipped travesty that is my first attempt at a kiss.


“There,” I declare in placid triumph.


“Damn, I must be a horrible teacher. Is that what I showed you last night?” he says in mock disappointment.


I look down at his chest and shake my head, feeling like a kid who got caught sneaking candy before dinner.


“How did I kiss you last night?” It isn’t a rhetorical question. He wants me to answer.


“Deep,” I say without thinking. “A-And long,” I add with a shaky breath and a blush. That’s the only way to describe his kiss. Other than being simply amazing.


“Hey.” He lifts my chin up so our eyes meet again. “I know you’re nervous, but you shouldn’t be. This isn’t a big deal. I know you can do this.” Great, now Austin’s giving me a pep talk. Hello, Self-esteem. Meet All Time Low.


Closing my eyes, I try to think back to his kiss last night. I take a deep breath and this time I pull him down to me. He leans down easily. I run through the checklist I made last night. I brush my lips gently across his as I tilt my head to the side. I place my lips on his, teasing his bottom lip with my tongue lightly.


“Open your lips,” I whisper against him.


“Yes, boss,” he quips. I stifle an annoyed sigh and slide my tongue into his mouth. He lets out a soft moan as his hands slide down to my butt.