Blast From the Past... Paper Kisses (from me!) 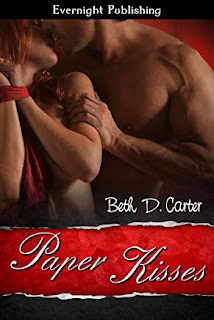 When Alannah’s husband tells her she’s boring and he doesn’t want to be married to her anymore she spirals into a world of hurt and confusion.  She decides to go back to her hometown in to figure out where she lost the confident girl she used to be.

Speeding into town, she’s pulled over by her old best friend, Skylar Randall, now the town sheriff.  He’s still mad at her for leaving twelve years ago without a word of good-bye.  But suddenly Sky isn’t just her high school friend anymore, he’s morphed into a man who goes after what he wants, and he’s just declared he wants her.

This book is written from a movie screenplay I had written years ago. So it was pretty much plotted out from the start. I did change the hero and his love of bondage.

All of it because the beginning actually happened to me. I had been in a relationship where my boyfriend of 15 years decided he didn’t really love me anymore because I wasn’t the same person he fell in love with. I had gained weight after the birth of my son, and he no longer found me physically attractive.

3.       Since the publication, what would you say has improved in your writing?

A lot. Writing is an organic process and the more you do it, the more you learn, especially through the editing process. I’ve learned the difference between passive and active writing, plus the meaning of “independent body part” movement.

4.       Do you believe a book cover plays an important role in the selling process?

Be true to the writing.

“Ladies,” he greeted in a soft, super seductive voice.  How’d he pack such a panty wetting inflection in one word?
Alannah listened to her companions fumbling for something coherent to say and failing miserably.  It would’ve made her laugh except she suspected she’d be in the same boat if she opened her mouth.  So instead, she rose, grabbed her empty plate and walked away, making a beeline for the nearest trash can before heading off into the woods for a quick walk to get her equilibrium back.
It was almost surreal being back here, hearing the splashes and laughter from the partygoers.  She knew once night fell that a bonfire would go up and everyone would settle around with beers and blankets to swap stories.  Some would head off for a little privacy.  Some wouldn’t give a shit about privacy.
“Having fun?” Sky asked from behind her, startling her so bad she almost tripped.
His arms caught her around her stomach and hauled her back just in time, and she sagged in relief until she felt all of him touching all of her.  Good god almighty, there wasn’t padding under those clothes.  His chest cradled her back and his groin fit in the curve of her ass.  And then, holy moly…his cock went from relaxed to hard in the blink of an eye.  He was poking her.  Literally.
All the breath swooshed from her and before she realized what she was doing, she’d wiggled her ass against him.  She was rewarded with a groan right before Sky bent over to nuzzle his nose against the curve where her neck met her shoulder.  His breath was warm and it tickled the fine hair at her nape.  Her libido began to hyperventilate, her mouth began to salivate, and suddenly all she wanted to do was turn around and ride him into next Sunday.
Holy shit.  Where’d that thought come from?
Panicking just a little, because he used to be her best friend, she pulled away and spun, panting like she’d just run a marathon.  His blue eyes were deep and stormy and they looked at her with good old-fashioned lust.  She felt an answering need pulse through her clit so she silently gave it a warning to back the fuck down.  This was Sky…  She couldn’t possible want to fuck him.  Could she?

WHERE TO BUY
EVERNIGHT PUBLISHING * SMASHWORDS * AMAZON * KOBO
Posted by Beth D. Carter at 1:00 AM