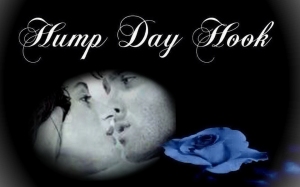 I’ve been working hard on edits for Otherworldly, my new novel coming from Siren Publishing on April 11th.  I’m so excited!  My editor has been fantastic and I think the book is really polished now.

I decided for this Hump Day Hook to highlight a paragraph from Otherworldly.  I know I’ve posted excerpts before but I wanted to post from one of the edits.  Next week I’ll be participating in the Lucky in Love Blog Hop and I’ll be blogging about what makes a hero yummy.  So I wanted to give the hero of this book, Jonas Daire, a chance to shine.

She lay half draped over his waist which allowed his one good hand to run down her back.  She’d worn a tank top and tiny, frilly panties to sleep in.  His fingers were just able to stroke the soft skin where her ass cheeks played peek-a-boo with the elastic and her body shivered against him and it wasn’t because she was cold.  Knowing she was awake and knowing he had the power to make her shiver sent his libido into overdrive.  Heat flooded through him, causing his dick to spring to life.  He wanted her.  Holy Christ, he wanted her.  Would there ever be a time when he didn’t want her?

Make sure to check out the others in the Hump Day Hook at: http://kerriannecoombes.wordpress.com/

Don’t forget to come back to my blog site for a chance to win one of my ebook novels during the Lucky in Love Blog Hop.  Plus my new novel, Otherworldly (McKnight, Perth & Daire 1), coming out April 11th.

Blurb:  Charlotte Perth is all about sass because her job is reminds her all too well the limits of human life.  She’s clairvoyant but her gift is unique.  She can only summon murdered souls and interprets the visions they send her.  When she’s hired by a wealthy woman to determine the fate of her great nephew, little does Charlotte realize this is one ghost that refuses to cross over.

Jonas and Charlotte work together to find the killer.  As the two grow closer together, another malevolent force won’t stop until the truth is buried…until Charlotte’s ghostly visions are her own.
Posted by Beth D. Carter at 10:39 AM